As riders lined up for the 8:30 AM start, conditions in Moab couldn’t have been better at the 3rd edition of the Moab Rocks mountain bike stage race. Clear skies and a warm sun peeking over the towering cliffs that surround Moab enticed over 100 racers daring enough to take on the 4,000-foot climb from downtown Moab to the top of the Upper Porcupine Singletrack trail.

Stage one of Moab Rocks is a brutal, bipolar, beast requiring riders to all out attack a relentless 4,000 foot paved and dirt road climb from the town center up Sand Flats road past the world-famous Slickrock trail and out to Upper Porcupine where the trail riding starts. 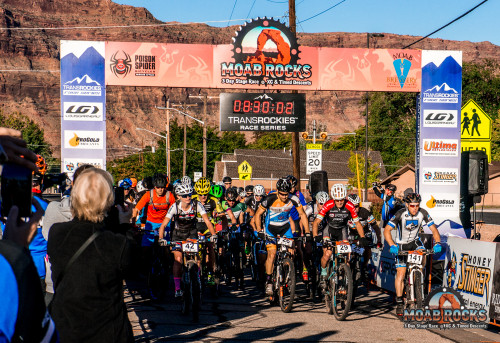 After blowing the legs out on a 17-mile climb, stage one flips a switch challenging riders with some of the toughest singletrack descending seen in any mountain bike race. Tire-shredding rocks, bone-jarring drops, and cliff-side exposure push even the best riders to their limits while descending along Porcupine Rim.

With so much road in the first half of stage 1 pack riding is common in the early going. This year saw open men’s riders Jeff Kerkove (Topeak/Ergon), Brent Pontius (Rooster’s/Bikers Edge), Chris Holley (Kuhl), and Jason Sager (Competitive Cyclist) joined by men’s 40+ riders Jens Nielsen and Ted Compton both with Stan’s NoTubes.

The leaders stayed together past the Slickrock trailhead but as the riding steepened up again riders started dropping off with the 40+ competitors and Kerkove coming off first, followed by Jason Sager as Chris Holley was driving the pace at the front.

“Once I saw the first few dropping off I decided to make a move and see what Brent had,” Holley said after the race. “He stayed there for a bit but I started to open a little gap on him so I really went for it then.” 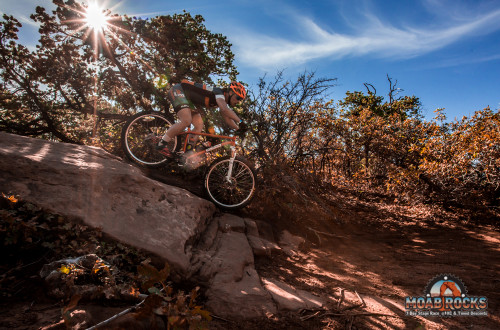 Holley’s efforts opened some space before entering the rugged descending of Upper Porcupine. While remounting after the gnarly Notch section, the race leader started hearing things behind him. “I heard foot steps and thought Brent was catching me,” said Holley. “I really started pushing hard at that point, probably too hard. I rode some terrible lines making life way harder. I knew Brent was on a 120 millimeter travel bike and I had 90 so I was pretty sure he was catching me.”

In the end, it wasn’t his nearest challenger he was hearing but his unrelenting pace opened up a gap of nearly 4 minutes at the finish.

Pontius held onto his position after the climb taking second with Sager coming in 3rd. Kerkove and Bobby Brown (Bicycle Outfitters) rounded out the podium for day one.

Holley felt confident he could defend his leader’s jersey on day two. Holley sat fourth after stage 1 in 2014 but suffered mightily the following day losing over 5 minutes to the leader and ultimately finishing 7th in the GC.

“I definitely didn’t have to dig as deep as I did last year, so I think this time will be better,” said the race leader.

The open women had a similar start with the top competitors working their way into some of the men’s groups as they charged through the opening 17 miles of stage 1. 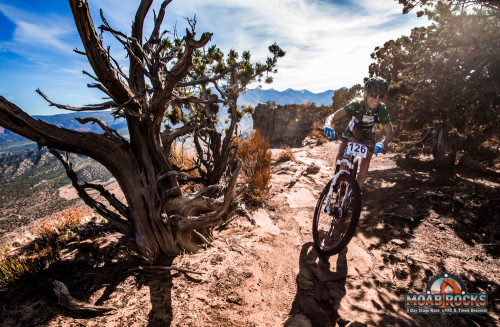 Karen Jarchow (BH/Castelli) led the way early on, using her well-honed climbing skills to get herself out front.

After the finish Jarchow said, “I felt like all the racing happened on the opening 17 miles of climbing. After that I just wanted to hold onto my lead and not crash.”

Jarchow was first to enter the singletrack with Brede dropping in second. After the long punishing climb, Brede had forgotten to unlock her fork and was thrown over the bars almost immediately. The Cycle Effect rider struggled to get up and knew right away she wouldn’t be able to continue.

Jarchow rode comfortably throughout the descent staying well ahead of KC Holley, who was now in second. Jarchow finally crossed the line with almost 4 minutes in hand.

Third place went to Arizona rider Kata Skaggs over 12 minutes behind the leader.

The next two stages will most likely feature heavy doses of close racing between the two leaders. KC Holley is an experienced rider in the red rocks of Moab. Stages 2 and 3 will play to her strengths as a master of technical riding. It won’t be easy though as Holley will have to use every bit of her skill to match Jarchow’s fitness.

When asked about the atmosphere of her first Moab Rocks, Jarchow had this to say, “It’s been so great. What’s better than hanging out with a bunch of Canadians in Moab. They are just the best people.”

Tomorrow’s stage is just over 32 miles on the Klondike Bluffs trail system. While still technical with plenty of slickrock, Klondike Bluffs lacks the prolonged climbs of stage 1 and includes much more singletrack than day 1. 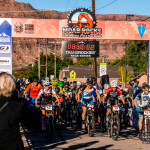 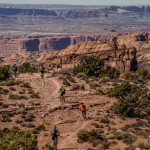 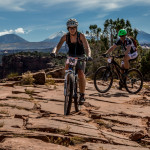 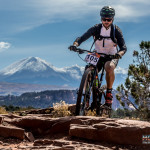 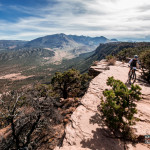 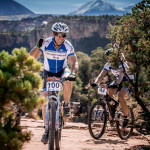 Stage racing should be a great time and proper preparation will ensure you have the best experience possible. Moab Rocks Stage Race Photo by: Raven Eye Photo 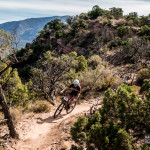 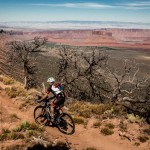 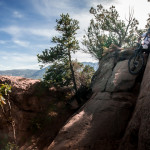 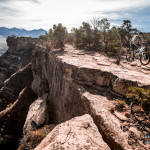 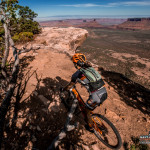 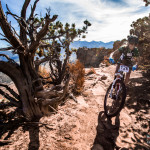 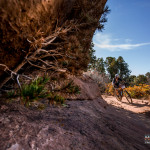 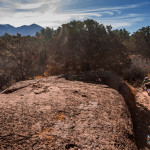 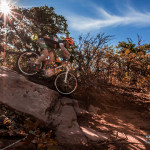 Skills play a huge part in every mountain bike race. Here a rider is tested at the 2015 Moab Rocks stage race. Photo by: Raven Eye Photo 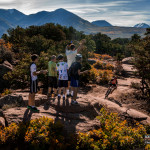