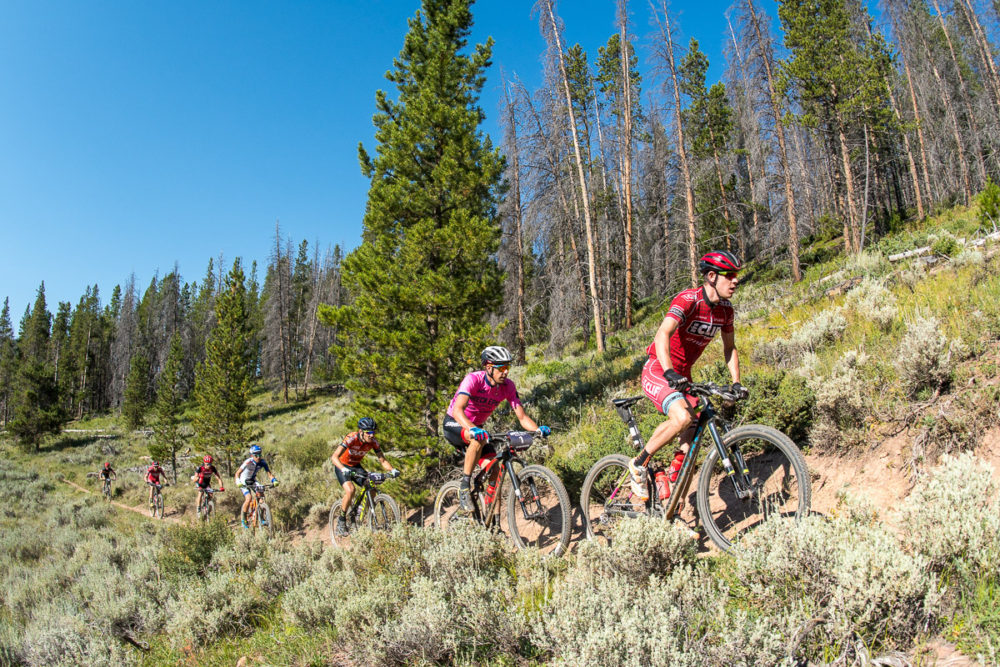 On stage four of the Breck Epic, the top 7 men were all together for the first 15 miles until the decisive climb, Vomit Hill. Photo by: Eddie Clark

After three days of racing, stage four’s Aqueduct route saw riders cross over the peaks of Summit County and pay a visit to Keystone Mountain.

Race leader Todd Wells and teammate Russell Finsterwald (SRAM / Troy Lee Designs) kept things civil, at least for a while, riding in a larger lead group through the first third of the race until they hit the exceptionally steep climb of the day.

At the base of Vomit Hill, Ben Sonntag (Clif Bar) hit the gas first with Finsterwald on his wheel. Wells had to unclip and run a bit to get back up to Finsterwald who had moved past Sonntag and the duo of Wells-Finsterwald distanced themselves for the day, once again.

“Of the four days, this one was the one where I felt best,” said Sonntag, who entered the stage in third overall. “I don’t know why, but maybe with doing Leadville on Saturday, it seems like even though these stages were super hard, it was still half the time out there [compared to Leadvile].” 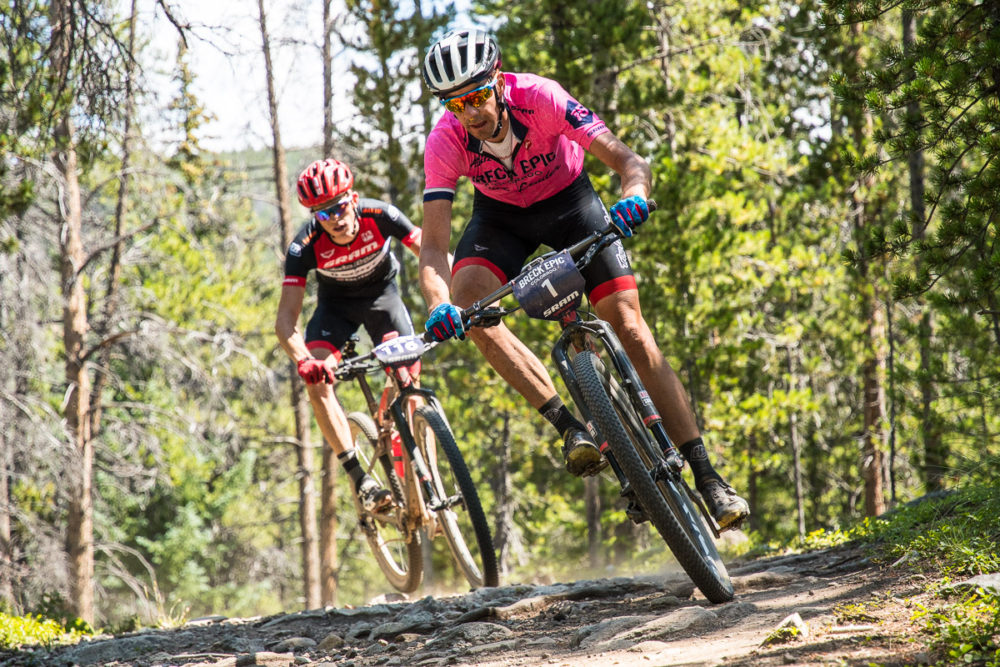 Todd Wells stands up to his number one plate with a stage win with teammate Russell Finsterwald on his wheel through the finish line on stage 4. Finsterwald is just 4:24 back in the GC. Photo by: Eddie Clark

“Todd and Finsty still got the gap on us,” continued the German. “What’s it called? Vomit Hill? I was with Chris Jones for a while, but after that it was a pretty lonely day.”

“We rolled together the rest of the day,” said Wells about riding with Finsterwald. “With the big climb out of Keystone, it is great to have someone with you because of the fast dirt road section.”

Going through aid two at Keystone Mountain, Wells and Finsterwald held a gap of 1:45 over Chris Jones (Unitedhealthcare Pro Cycling) and Sonntag. Fernando Riveros and Wells’ little brother Troy were another 1:15 behind Jones and Sonntag with single riders chasing in areas. 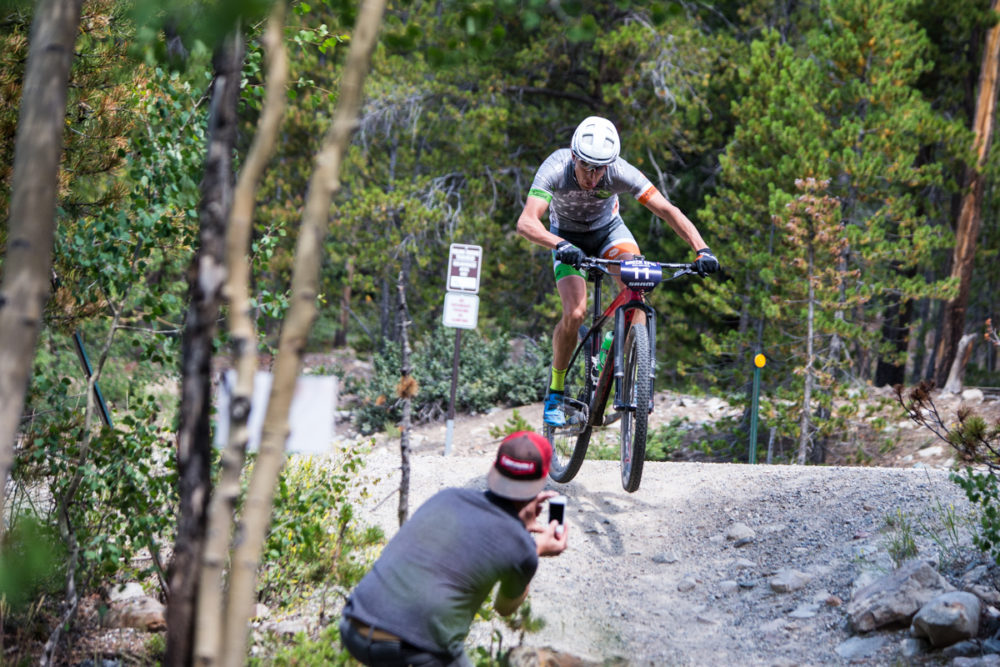 Kevin Day rushes to the finish line after being surprised by his family, who drove through the night from Utah, at aid one. Photo by: Liam Dorian

By the finish Wells and Finsterwald had a two and a half minute over Sonntag and Fernando Riveros was over six minutes back with Chris Jones was close behind.

With Sonntag’s third place finish today on stage 4, he padded his overall third place, though he sits almost 22-minutes behind Wells. Kyle Trudeu (CZ Racing) sits in fourth, 12-minutes behind the German and Drew Free (KUHL-Pivot Cycles) is in fifth. 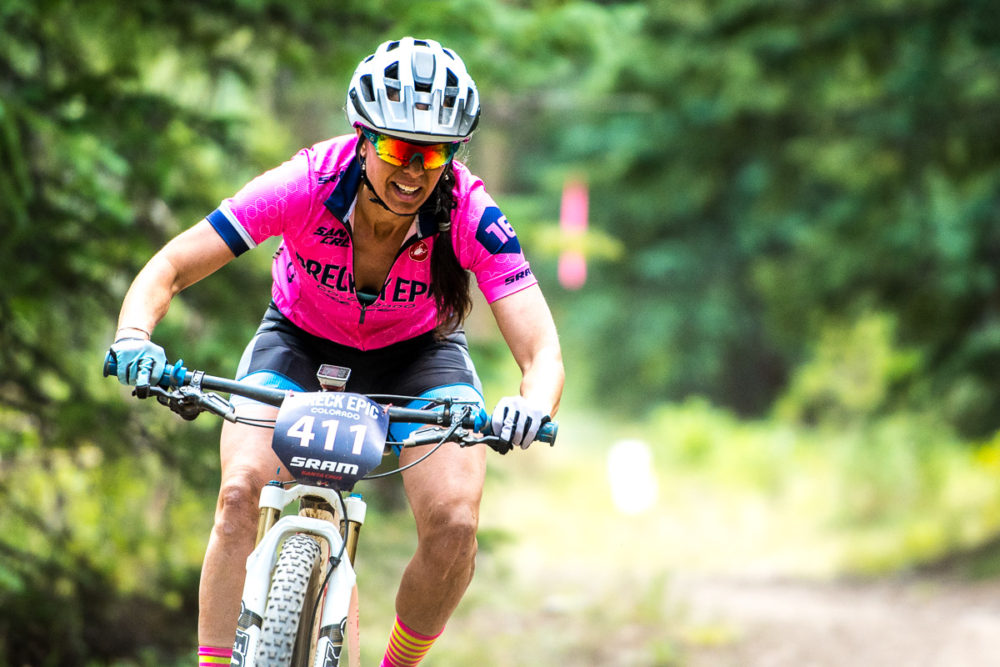 Showing true grit, Rebecca Gross rounds one of the final corners on a demanding fourth stage. Team KASK sits pretty in pink in the lead in the coed duo 6 day race. Photo by: Eddie Clark

Amy Krahenbuhl added to her lead once again on the Aqueduct stage, bringing her lead to over 40-minutes. Second and third-place overall riders, Emma Maaranen (Rolf) and Ksenia Lepikhina (Tokyo Joe’s) finished the stage placed consistent with their general classification.

We asked Krahenbuhl about the road (and trail) that’s brought her to the Breck Epic, one that saw her race the Trans New Zealand earlier this year.

“I’ve done random races here and there,” said Krahenbuhl. “More recently, I’ve been doing enduro racing and with that stuff, I would think ‘man, I could do really well if this whole thing was timed,’ because I’m not the fastest climber or descender, but I can go for a long time and hold it together.” 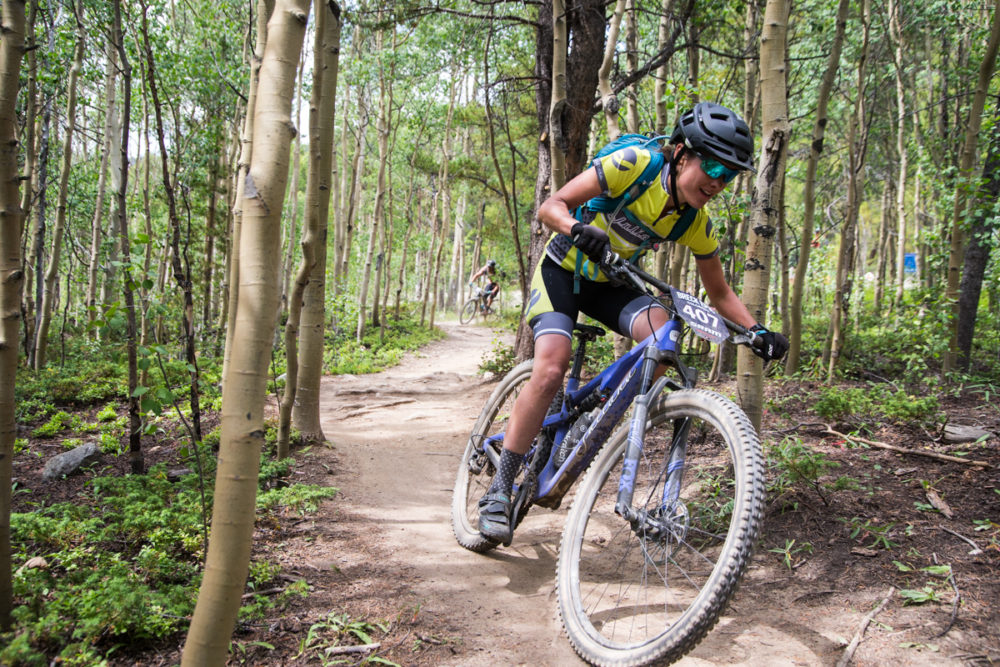 One half of the Juliana Bicycles 6 day duo women’s team, Uriel Carlson rounds one of the final corners before the finish line on stage four. Team Juliana Bicycles stays in third place on the day and the GC. Photo by: Liam Dorian

“It was really pedally,” said Krahenbuhl about the Aqueduct stage. “The big climb was a big, BIG climb. The descent down Colorado Trail was amazing. Definitely one of the more fun descents we’ve done so far.”

While it may seem as though the overall leads are all but sewn up, tomorrow’s weather forecast and the profile of the Wheeler Pass stage tomorrow, so much can happen. As Wells said just over 24-hours ago, “anything can happen in mountain bike stage racing.”

“Hours could be lost.”

Click Here for full results from Stage 4 and GC