In the Men’s Open, it was again Kerry Werner (Ken’s Bike Shop) and Tristan Cowie (CTS) riding together at the front for most of the day. Cowie was able to create a small gap on the final descent on Black Mountain to take the stage win by three seconds. That saw him leapfrog past Werner to take over the race lead, but with just two seconds separating first and second it’s still all to play for with three days of racing behind. 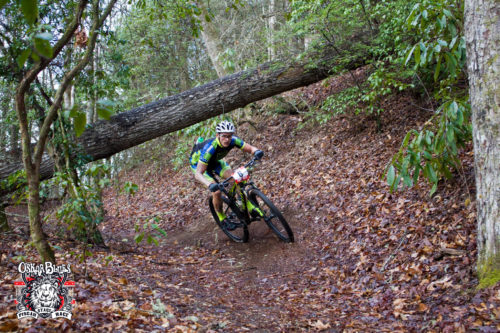 Behind Werner and Cowie, overnight third place rider Chris Tries (Piney Flats Bike Shop) suffered a disastrous mechanical when his wheel imploded early in the stage. Fortunately, he was able to borrow a bike from a volunteer, and ride himself back into third on the day to preserve his GC spot.

On the women’s side, it was again Bryna Blanchard who took the win, but Emily Shields (Stan’s No Tubes) made some moves and was able to ride herself into second in GC thanks to a strong performance. Heidi Rentz hung on for third.