In it’s 8th year the Park City Point 2 Point continues to establish itself as a favorite of racers throughout the country. Over 75 miles, the Point 2 Point circumnavigates the resort town of Park City, Utah, traversing the Wasatch mountains and the two world-class ski resorts of Deer Valley and Park City/Canyons.

A classic fall scene greeted the riders as the maples of the Wasatch range speckled the 9,000 foot peaks with shades of red and yellow and temperatures on race day hovered in the mid-seventies. Overnight rains tamped down the dust on a landscape that hadn’t seen rain in almost 80 days. 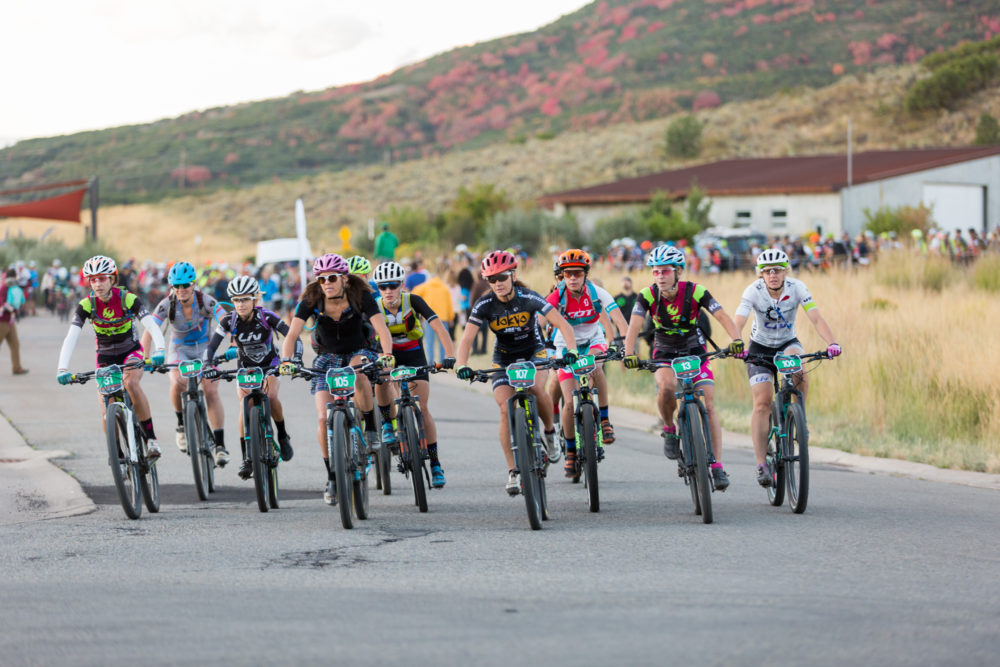 Riders were twitching with anticipation as Fruit Loops, fired from a potato gun, rained from the sky signifying the start of the race.

And they were off, 350 riders of all experience levels, taking on the truly unique challenge of a course that’s 75-miles in length with a whooping 10,000 vertical feet of climbing spread across over 95% singletrack riding providing every rider a top-notch mountain bike adventure. 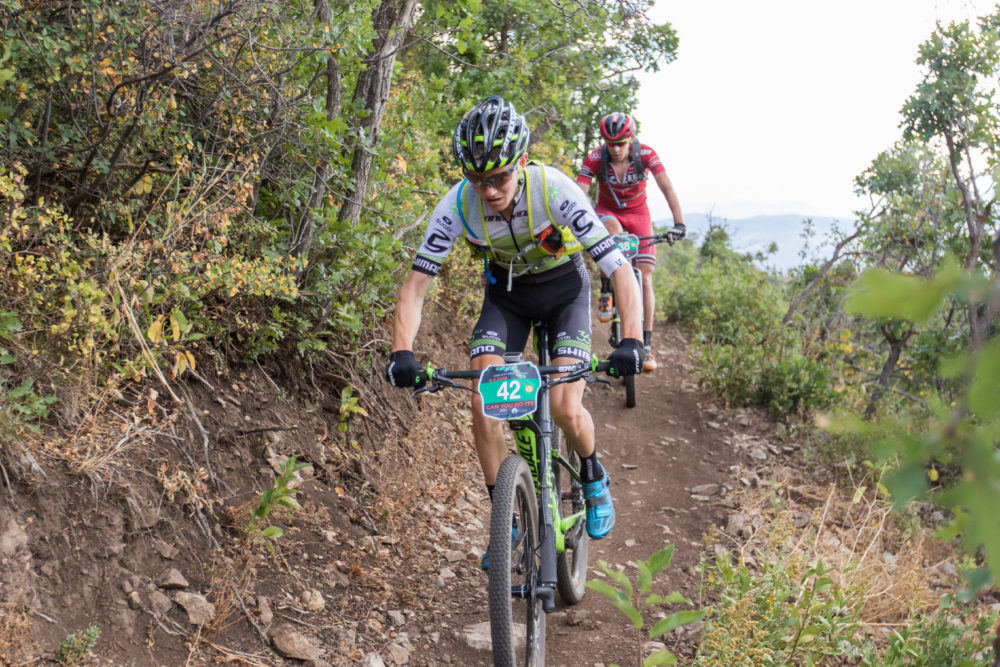 The trio didn’t disappoint as the created a clear separation early in the race and continued to power away from the chasers.

Around mile 32, the three leaders approached the base of the Team Big Bear climb, the steepest of the race’s early climbs, Swenson’s pace opened a slight gap that Sonntag was unable to cover. Squire attacked around the Clif Bar rider in an effort to close the gap but the separation stayed.

“I felt it might be a little early for me to be on my own,” Swenson shared after the finish, “But I figured if I kept Robbie off my wheel on the descents and didn’t let him follow my line I could keep putting time on him.”

The strategy seemed to work as Swenson crushed the enduro segment by over a minute on Squire and Sonntag. 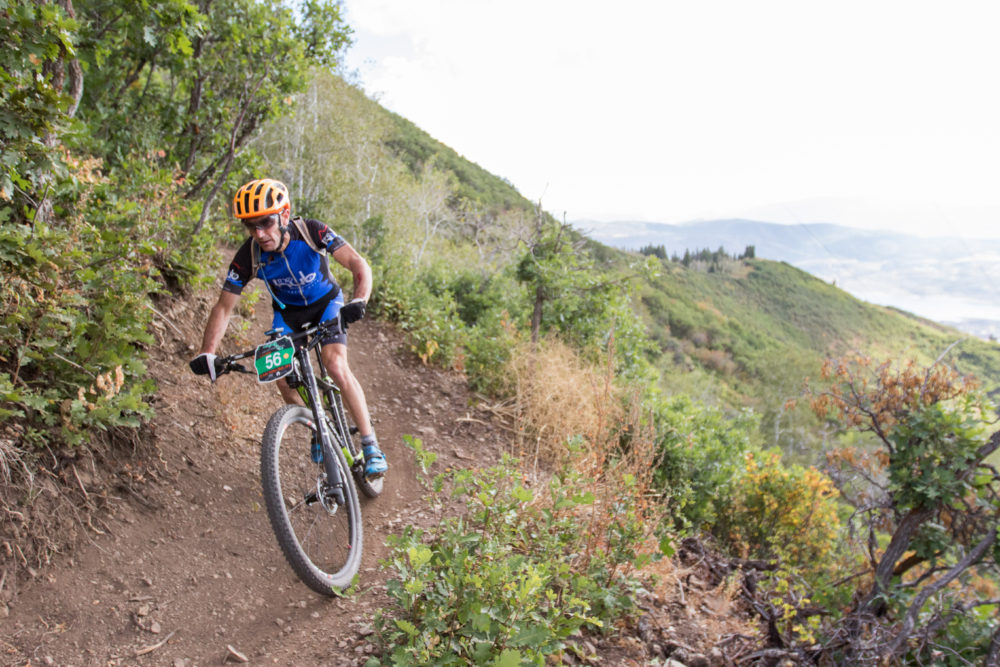 With some climbing mixed in, Swenson went to work on the John’s trail, Powerline, and Crescent Mine Grade descents and had over 8 minutes in hand by the time he reached the Park City feedzone at mile 55. Still looking fresh with an all-but-insurmountable gap all that was left for the young Cannondale phenom was the course record, set by his teammate and 6-time Point 2 Point winner Alex Grant, of 6:16:31.

Meanwhile, Squire was doing his best to hold off Sonntag. Powering through the climbs, the defending champ was looking good until a high-speed rock garden on the Crescent Mine Grade descent stopped him dead with two flat tires. He used his only CO2 cartridge to air up the rear but was forced to ride a flat front tire the rest of the way down to the feedzone at Park City. He was still holding onto the second spot at this point but Sonntag came and left the Park City feed while Squire’s bike was still in the repair stand.

Once his tires were aired up Squire remounted and produced an all out chase but Sonntag knows how to pace himself and had plenty left in the tank to punch through the final 20 miles and hold off Squire to the finish.

Out front most of the day, Keegan Swenson steered clear of any trouble and hammered his way through the final sections of the course in record time. He crossed the line 15 minutes in front of second place with an incredible finish time of 6:11:04 to take home the $2,000 race winner’s purse plus an extra $100 for posting the fastest time in the enduro segment. 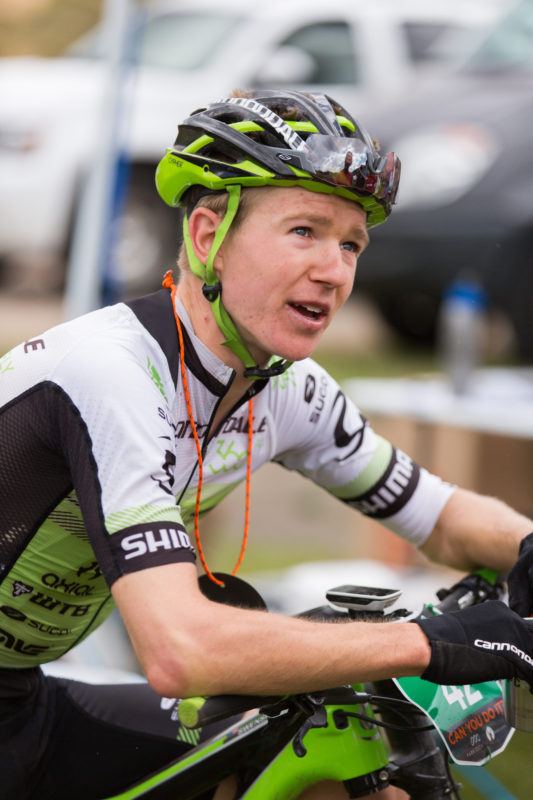 Keegan Swenson looking relaxed after laying down an unbelievable time in his hometown of Park City. Photo by: Selective Vision

Behind the leaders, Point 2 Point veteran Sam Sweetser (Cole Sport) was putting on a clinic on overcoming adversity. Somewhere around the horribly steep Steps climb, about mile 45, Sweetser felt his saddle break. “I could feel it crack and start to sag in the middle but it was still rideable,” Sweetser later relayed.

Just a mile or two later Sweetser stood on a climb and when he sat down the saddle was gone and only rails remained. “I tried to stand for the whole climb up and around Shadow Lake but at some point you just have to sit again.”

So for the next 10 miles the Cole Sport rider made-do with metal rails for a seat until he reached the Pack City feed and a friend quickly swapped the saddle of his bike for Sweetser’s.

Sweetser said the next 20 miles were the toughest of any Point 2 Point he has done but he proved strong enough to hold off David Krimstock (Giant) for fourth. 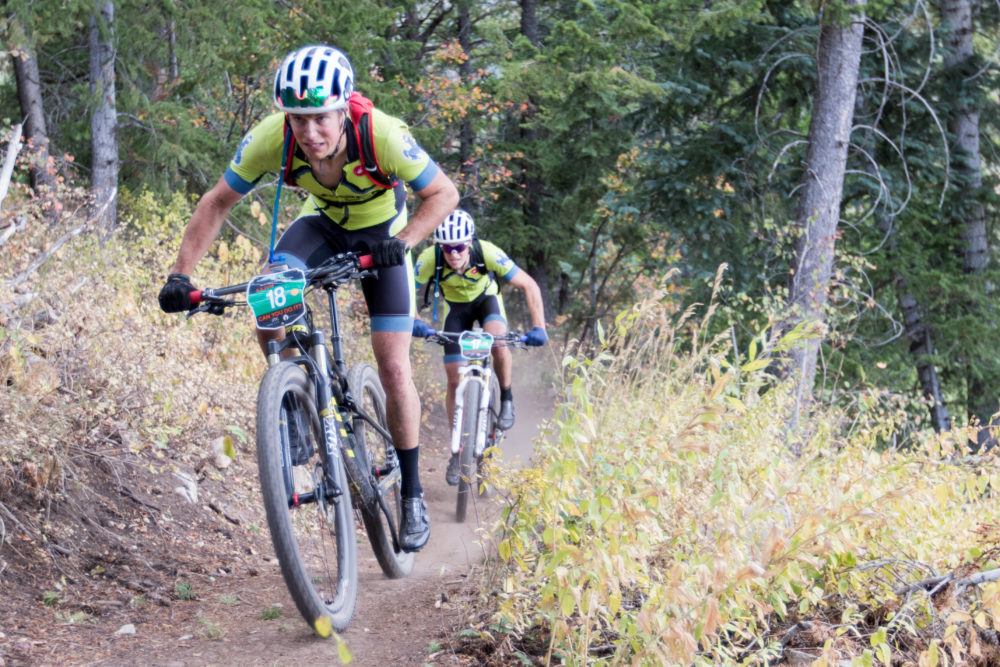 The Flynn Twins charging to the finish. George leads Bart through some final sections of single track. Photo by: Selective Vision

Carbondale, Colorado, rider Krimstock took fifth just in front of the Flynn twins, George and Bart, who sprinted for the finish crossing less than a second apart respectively.

The front group formed quickly after the start with Kofman, Reeves, Dixon, and Gomez-Villafane establishing an early lead. 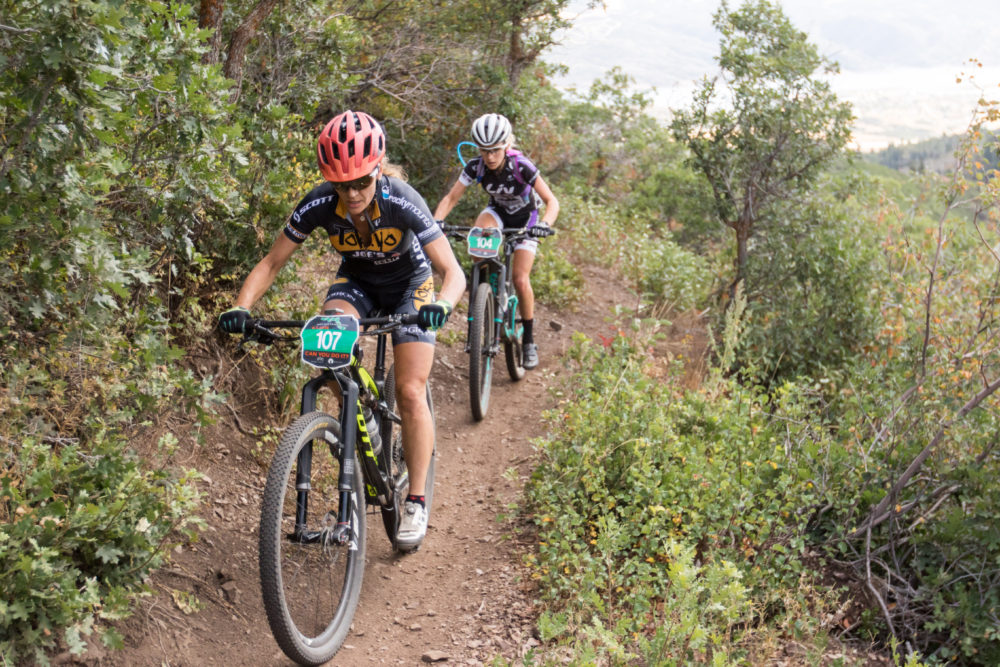 Kofman and Reeves would break away to form a lead group surging ahead on the climbs and rollers in Round Valley and on their way to Deer Valley Resort.

At the first aid station the leaders held a solid lead with Reeves looking fresh and cruising through the feedzone while Kofman made a stop to fill her bottle.

The leaders then attacked the Team Big Bear climb where Kofman was able to all but close the gap to Reeves before the next feedzone at Guardsman Pass when Kofman again stopped and appeared a bit stressed to catch back up to the leader.

She wouldn’t see Reeves again however.

Into the singletrack descending portion of the course the Tokyo Joe’s rider appeared in her element as she stretched the gap behind her. 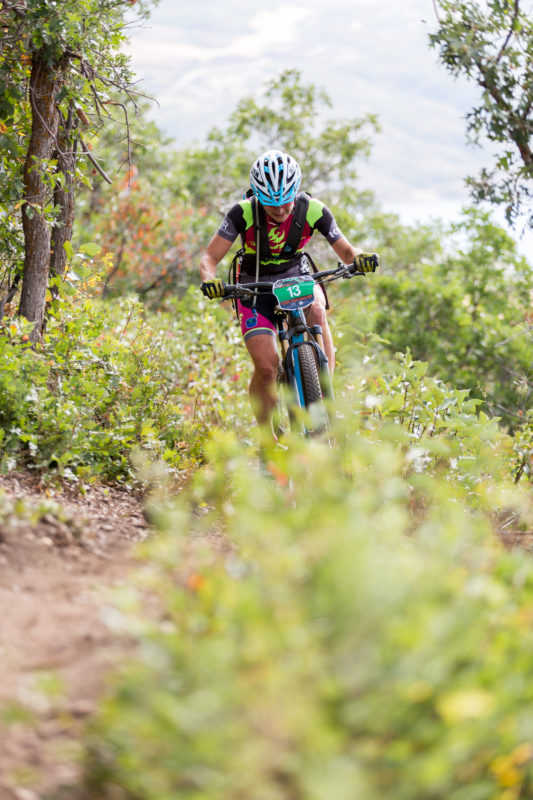 Marlee Dixon grinds out a few of the P2P’s 10,000 vertical feet of climbing on her way to a second place finish. Photo by: Selective Vision

At this point Kofman started to slowly drift back in the pack, appearing to suffer from her early efforts. Marlee Dixon, who was riding a hardtail, caught and passed her on the punishing Steps trail ascent.

Kofman still held onto third position as she hit mile 55 at the Park City feedzone.

Gretchen Reeves was long gone however. At Park City she had over 9 minutes on Marlee Dixon and kept the hammer down pulling further ahead with each mile.

By the end, Reeves would claim her second Point 2 Point title by just over 16 minutes with a time of 7:34:52. The Avon, Colorado, rider posted on Facebook later that the Point 2 Point is the toughest single-day race she has done.

Marlee Dixon powered through the finishing miles of the race to take another second place at Canyons Resort with a time of 7:49:59 and a $100 bonus for winning the enduro segment.

At this point the only question left to answer was where Mikaela Kofman would end up.

As the crowd looked on, they would first see Sofia Gomez-Villafane crisscross her way down the mountain to take the third spot.

Next would come the bright orange helmet of Nicole Tittensor, who wasn’t in the early lead group, but climbed her way into the mix finally moving into the fourth spot as Kofman struggled to find the finish line. 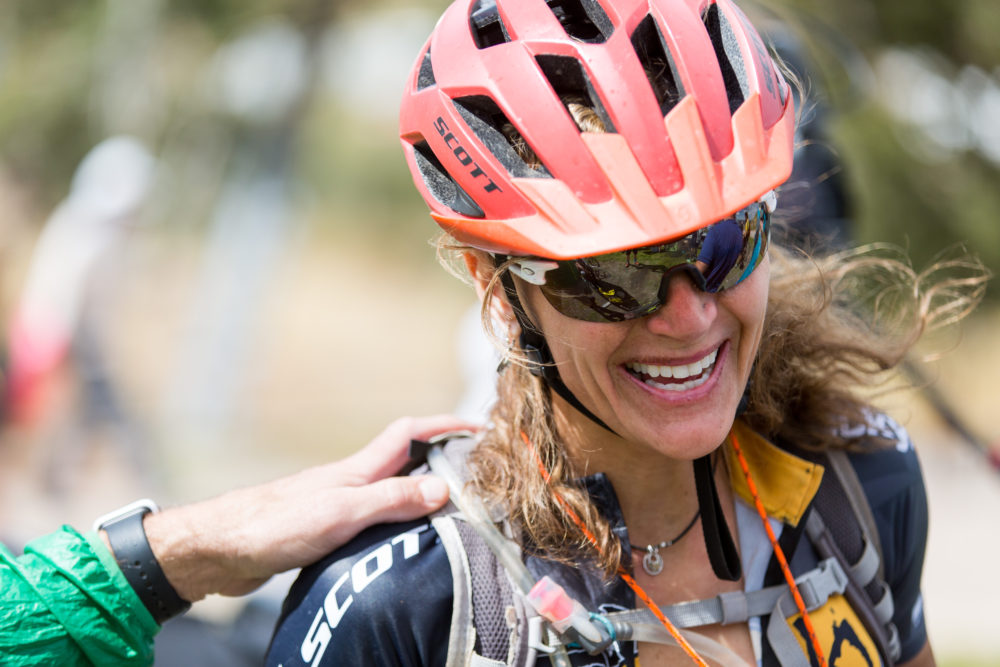 Finally, 18 minutes after Tittensor crossed the line Mikaela Kofman came in to finish off the podium in fifth spot.  It took a big effort from the tiny Ridebiker rider that was enough to finally get her home and still on the podium.

After the crossing the line riders and spectators spread out onto the lush lawn surrounding the finishing shoot at Canyons Resort. Both exhausted and elated, riders of all levels spun tales of their shared 75-mile struggles over free drinks and meals provided by the event organizers. After 8 years, the quality of the Park City Point 2 Point remains high; from the racecourse to the volunteers and race organizers, this five-star event keeps packing in the participants year after year. 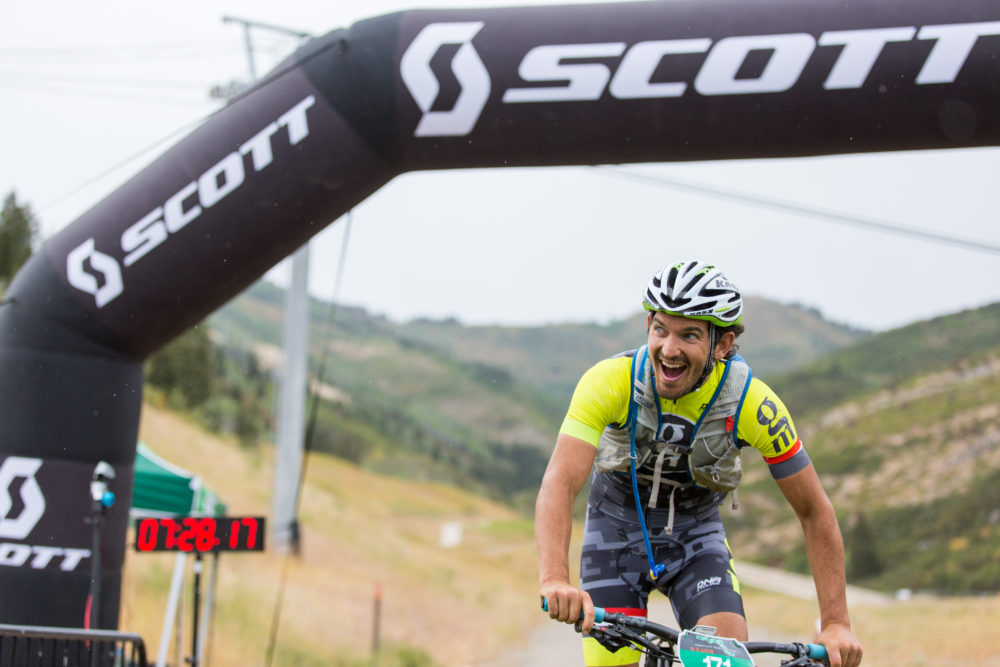 Jon Russell was all smiles all day but especially at the finish line. Photo by: Selective Vision

Registration for the 2017 Park City Point 2 Point starts in February. The event has sold out in under 10 minutes that past 6 years so get ready when the exact date is announced. 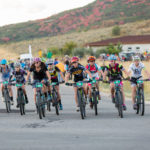 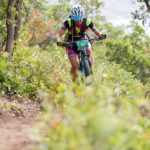 Marlee Dixon grinds out a few of the P2P’s 10,000 vertical feet of climbing on her way to a second place finish. Photo by: Selective Vision 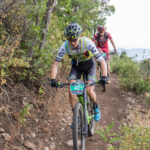 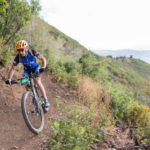 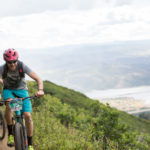 Jason Hawkins is the only rider to participate in all 8 editions of the Park City Point 2 Point and he’s still enjoying the ride. Photo by: Selective Vision 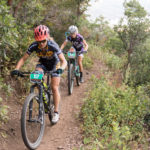 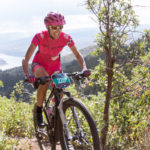 Jonna Palmer enjoys great views and exceptional one track on her way to Deer Valley Resort. Photo by: Selective Vision 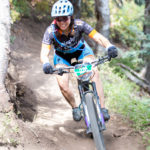 Lyna Saffell on course, enjoying some of the flowing P2P descents. Photo by: Selective Vision 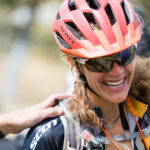 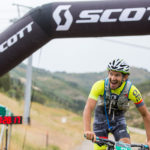 Jon Russell was all smiles all day but especially at the finish line. Photo by: Selective Vision 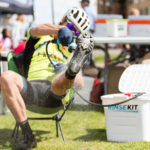 Cooling off and cleaning up at the P2P finish line. Photo by: Selective Vision 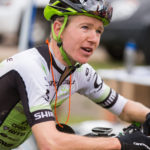 Keegan Swenson looking relaxed after laying down an unbelievable time in his hometown of Park City. Photo by: Selective Vision 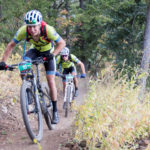 The Flynn Twins charging to the finish. George leads Bart through some final sections of single track. Photo by: Selective Vision 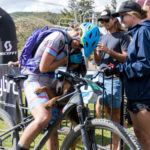 Parker Tyler gets kisses after a top-10 finish. Photo by: Selective Vision 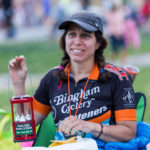 Lyna Saffell sits for a well-earned rest after finishing the P2P and taking home the red lantern award. Photo by: Selective Vision