Saturday morning, the backcountry mountain bike spectacle known as the Park City Point 2 Point sounded the start canon. The race that normally ushers in Utah’s colorful fall blasted off but none of the cool temps, changing foliage, or damp hero dirt that usually accompany the event were on hand. Instead, summer conditions were in full force in the Utah high country.

The forecasted temperatures in Park City were hotter than ever but so was the competition at the 9th annual Point 2 Point. With a $2,000 winners purse the Point 2 Point always draws some top talent but 2017 featured a faster-than-ever group of men vying for the top positions. Highlights of that group included former national champions Todd Wells (Scott/Troy Lee) and Geoff Kabush (Scott), defending P2P champion Keegan Swenson (Cannondale), who passed up a trip to the world championships for a shot at defending his title, as well as a host of ultra-endurance honchos like Construction Zone Racing/Scott Sports teammates Kyle Trudeau and Fernando Riveros-Paez, Ben Sonntag (Clif Bar), and Justin Lindine. 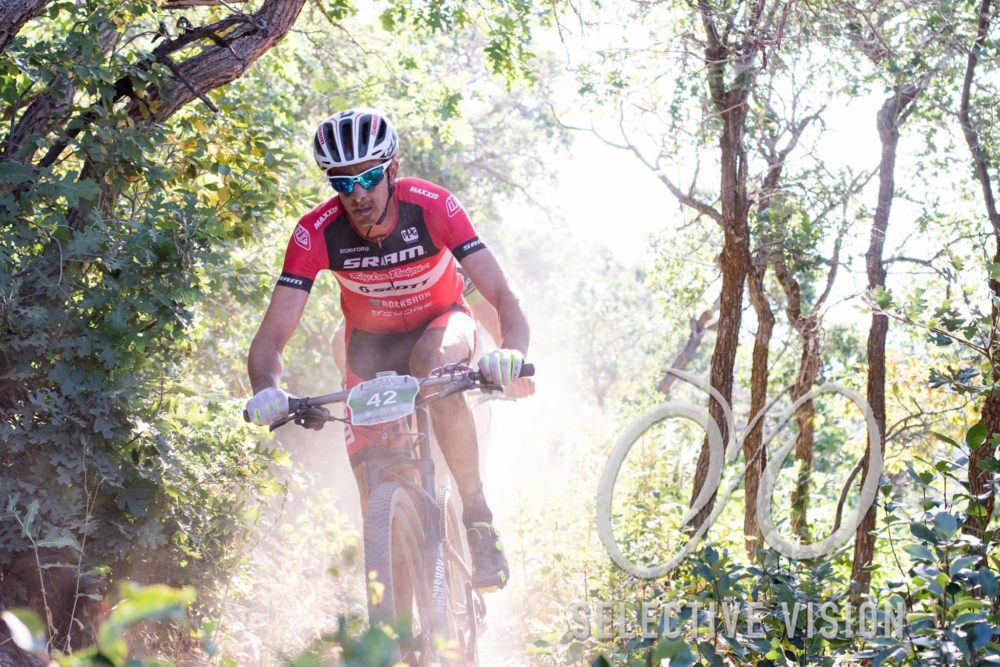 Right from the gun it was clear this year’s P2P was going to be like no other. An hour in, despite miles of singletrack, no fewer than a dozen riders still occupied the lead group, and they were rolling fast.

Another hour of climbing only managed to dislodge two riders as a pack of 10 powered through the Deer Valley feed led by ’15 P2P champ Robbie Squire. All the top riders were represented with Geoff Kabush biding his time a few bike lengths off the back.

Around the halfway point, Swenson attacked, pushing the pace into the long enduro segment on the Corvair trail. A move that worked for him in 2016, Swenson popped more riders from the lead group but couldn’t shake Wells. By the time he entered the aspen-rooted maze known as John’s Trail, Swenson and Wells established a gap of a few seconds over the rest of the lead group. 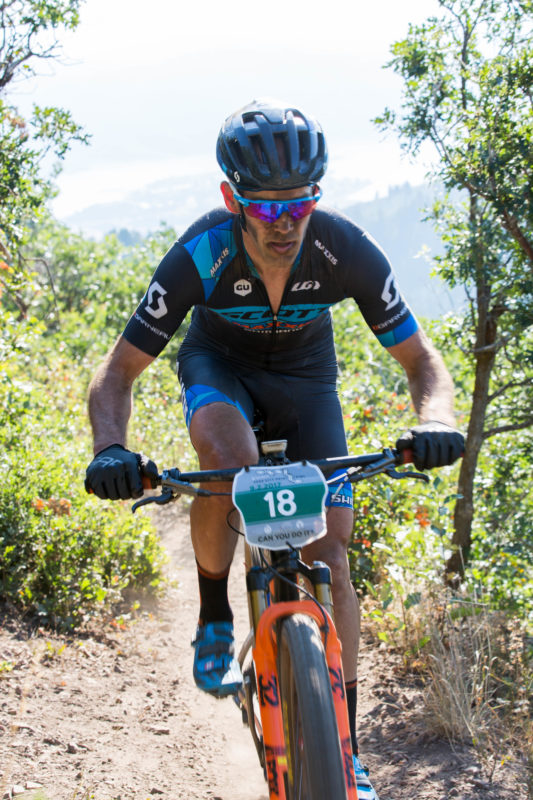 The two leaders stayed wheel to wheel and Kabush rejoined the affair as they climbed up and around Shadow Lake, the high-point of the race. As they descended down the 20-minute Crescent Mine Grade trail Kabush would blow a tire before they reached Park City Resort (Support Station #3), dropping him back a little more than 5 minutes.

With just over 20 miles left the lead duo now had a 2-minute gap on Kyle Trudeau and Ben Sonntag and over 5 minutes on Canadian, Geoff Kabush.

Wells and Swenson continued their two-man battle over the final mix of climbs, rocky descents, and unbroken singletrack from Park City Resort to the new finish line outside Skullcandy headquarters. 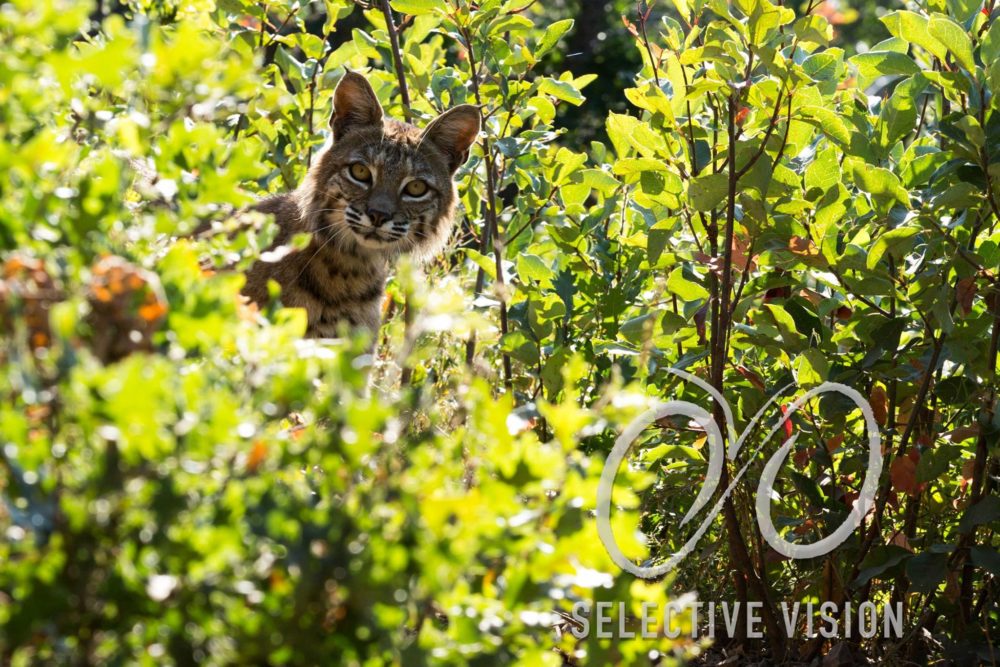 After 75 miles the race came down to a sprint finish. Wells took the early lead out on the slightly downhill paved bike path that made up the final 200 meters of the Point 2 Point course. Swenson tucked in behind as both riders built up speed all along the finishing stretch. In fact, they were coming so fast that race director Jay Burke had to clear all the spectators from the finishing venue and pull up stakes on the finishing chute to make room for the elbow-to-elbow battle.

Both riders powered out of the saddle in their biggest gears, surging toward the line with Swenson popping out of the draft in perfect slingshot position to nip Wells at the line and take his second Point 2 Point title. 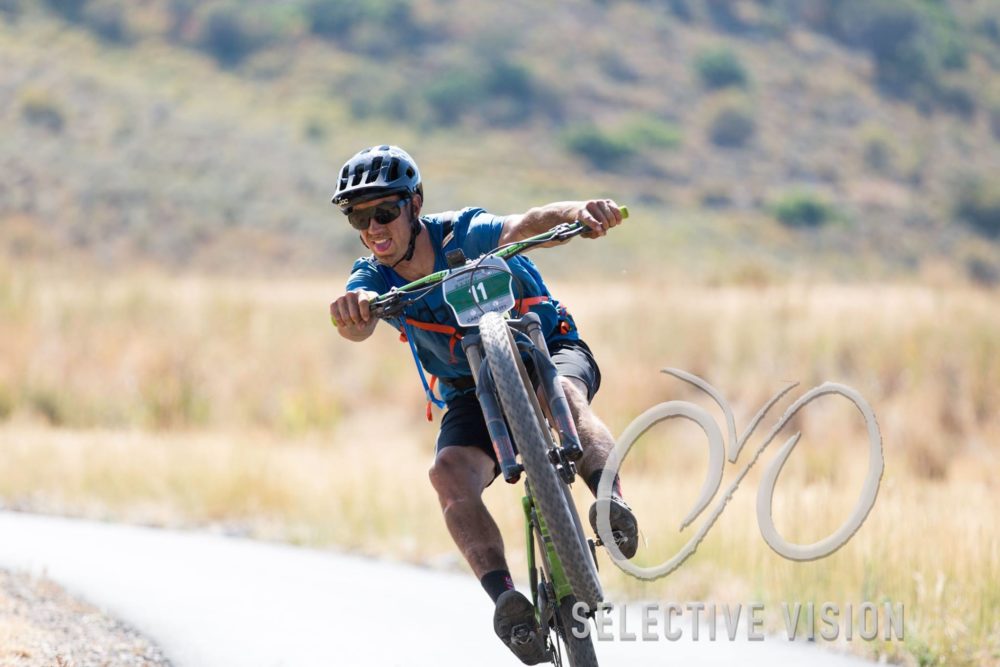 Geoff Kabush made an impressive final surge, posting the fastest time over the final 20 miles, taking minutes out of the leaders but coming up just short only a minute and a half behind at the finish.

Ben Sonntag rolled in for fourth just in front of Kyle Trudeau.

The ladies of the 2017 Point 2 Point provided their own firepower for this ultra-endurance event. 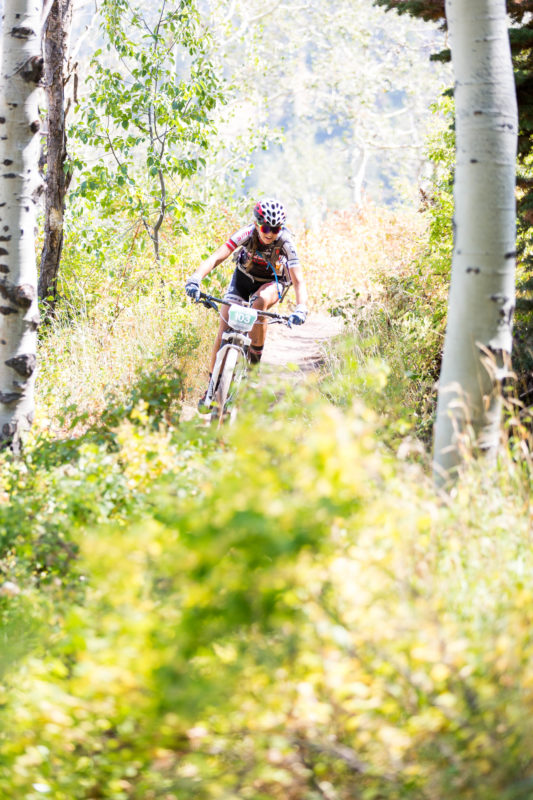 Past winner Evelyn Dong (Liv) made her return to Park City and the P2P. Hannah Bingham (Eriksen), winner of the Steamboat Stinger, made her debut at the race as did TransSylvania Epic winner Kaysee Armstrong (Liv). Recent Pierre’s Hole 100k champion Caedran Harvey (Fitzgerald’s) was also on hand along with Breck 100 and Lutsen 99er champion Larissa Connors (Twenty20/Felt).

From the start the pace was high as Connors and Armstrong jumped to the front opening gaps early on. 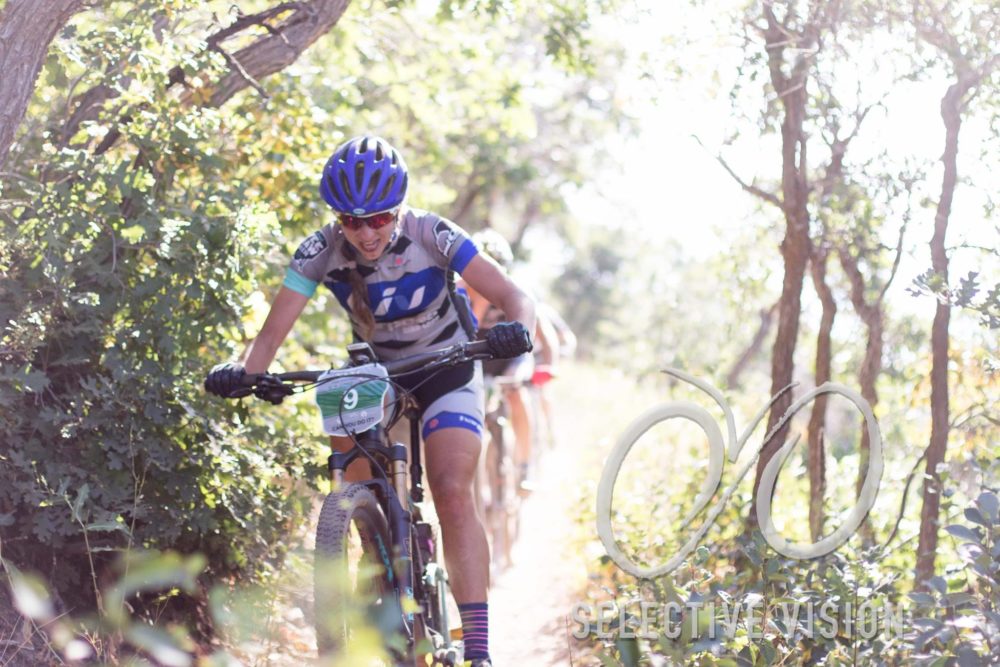 Connors quickly established herself as the early leader though, pulling away from Armstrong and the rest of the field in the winding one-track of Round Valley. The early climbs certainly didn’t slow Connors either as she steadily opened a gap to the chasers while picking off riders in the open men’s field that started in front of her.

A battle for second was brewing behind the lone leader however, Firecracker 50 winner Marlee Dixon (Pivot/DNA Cycling) was riding just in front of Caedran Harvey as both riders climbed past Deer Valley and Shadow Lake over 50 miles into the race.

Dixon held about a minute lead until both riders entered the Park City feed together. Harvey left the feed just in front of Dixon and despite having several thousand feet of climbing in front of her, Harvey started to feel her best form of the day coming on.

Harvey made the best of it, putting almost 10 minutes into Dixon in the last 20 miles. Despite Caedran’s impressive surge Connors was too far-gone to even think about bringing back. 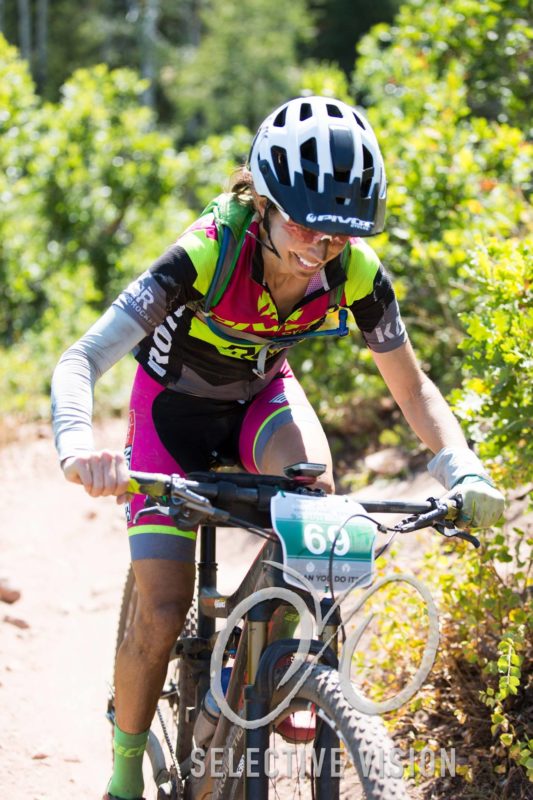 Larissa Connors had such a good day in fact that at the finish her time would have placed her in the top-20 of a stacked open men’s field.

After just over 7 hours of riding Connors crossed the line to claim another win in her long list of ultra-endurance triumphs this summer. In a surprise move Connors donated her entire $2,000 prize purse to the Summit Bike Club, a local youth mountain bike development team.

Once all the excitement, awards, and money had been dispersed the final finisher was still on course. Although the fastest finishers cross the line in just over 6 hours most riders in the Park City Point 2 Point take much longer to cross the line. 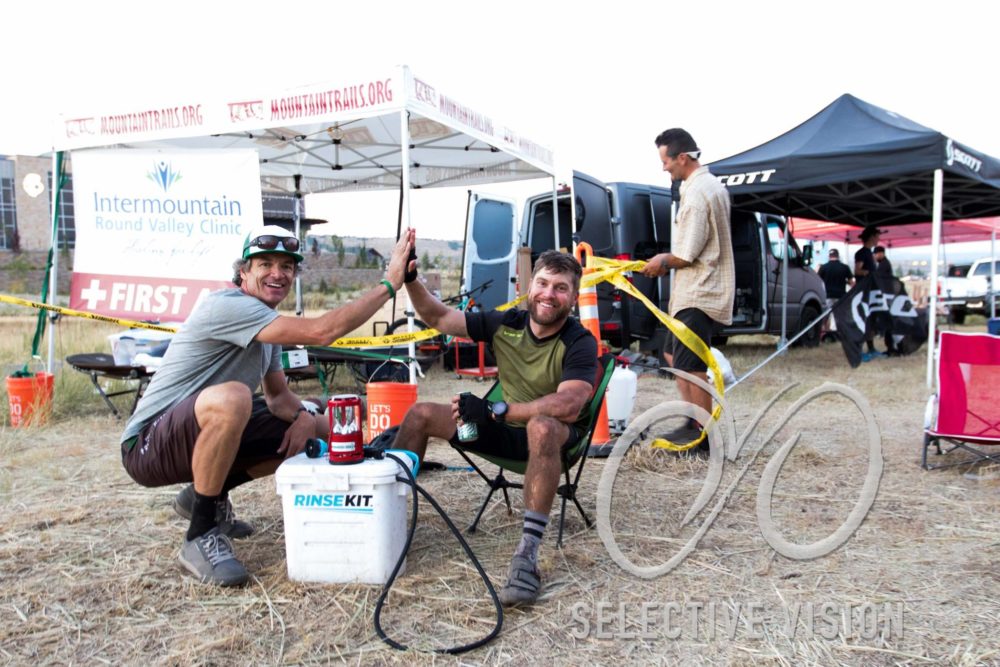 Each year the P2P saves a special prize package for the Red Lantern, the final racer on course, recognizing the incredible effort of the rider who spent the longest time on their bike and persevered to the finish. This year Josh Murphree took home the Red Lantern prize who in his second attempt at the Point 2 Point finished the 75-mile course in 12 hours 52 minutes and looked surprisingly fresh doing so. 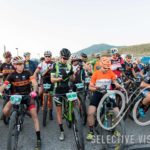 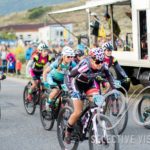 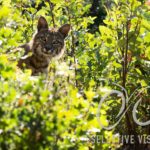 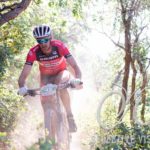 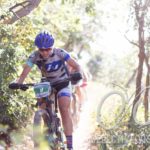 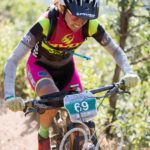 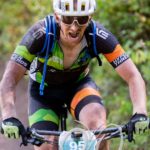 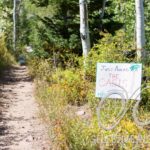 The Oasis support station is a favorite just miles from the finish. Angie Harker/Selective Vision 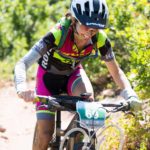 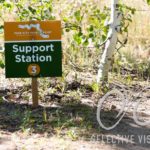 Support stations are lifesavers at the P2P. Angie Harker/Selective Vision 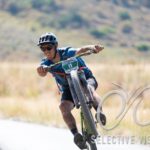 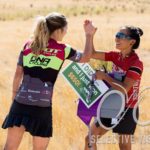 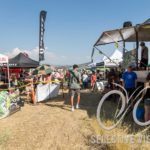 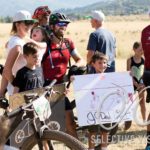 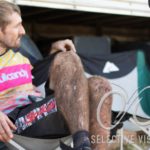 No rider could avoid the dust on a very dry day in Park City. Angie Harker/Selective Vision 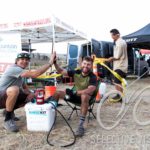 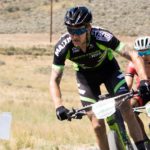 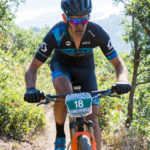 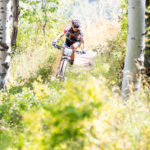