The KENDA Mohican 100 dispatched nearly 600 racers along some of the most popular single track trails Ohio has to offer on a grand single loop, 100 mile and 100k, that spans three of the four counties that make up what is locally known as “Mohican Country”. This year, several hike-a-bikes were rerouted to make them more ridable, including a new and safer crossing at SR97. Mohican offered a $10,000 cash purse, the largest in the NUE Race Series.

The NUE MARATHON Race Series featuring distances ranging from 50k, 50 mile to 100k was introduced this season with a best four of ten race schedule held at existing NUE Races that offer shorter distance options. Equally as popular as the 100 mile distance and now an Olympic distance, The Mohican MTB100k is proud to join NUE. 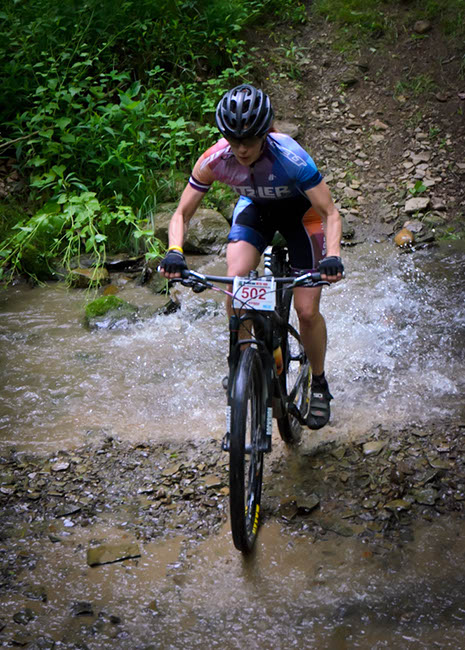 Sally Price, Velofemme p/b Litzler, Bike Authority, The 2015 race winner and ONLY sub-six finisher in the Women’s open has done it again, winning her second her second straight Mohican 100k as the only Women’s sub-six, at 5:47:58, a full ten minutes faster than last year! 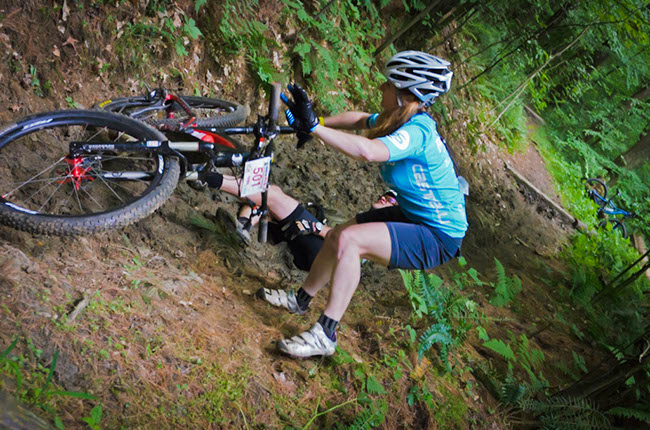 Purcell posts back to back Mohican wins

Purcell is currently leading the Men’s Pro/Expert Division of the Ohio Mountain Bike Championship Race Series and is coming off a seventh place finish at the Big Frog 65, making him a top contender for the NUE Marathon Series title. Purcell represented the Ohio Series in 2014, completing the LaRuta de los Conquistadores, a three day stage race across Costa Rica billed as the toughest race on the planet.

“My race on Saturday went very well. Heading into the woods from the dirt road, I was in the top 10 and worked my way up to the lead at about mile 5-6. I continued to lead until mile 14 or so where Lico, the hundred mile racer from Costa Rica, put in an attack but didn’t really go anywhere. We all stayed together with a bit of yo-yoing within the group until the course split at Aid 3, mile 46.  I turned left, following the 100k course, and rode to the finish by myself. I thought the course was great this year and the signage was good along with all the aid stations. I am undecided on my next NUE race, leaning toward the Hamphire 100 but that could always change.”

Less than a minute back of Clark, Ethan Millstein, Nationwide Veloworx, checked in fourth at 4:46:06. Another minute passed before Ryan Krayer, Adventure212 / Specialized, took fifth at 4:47:26. 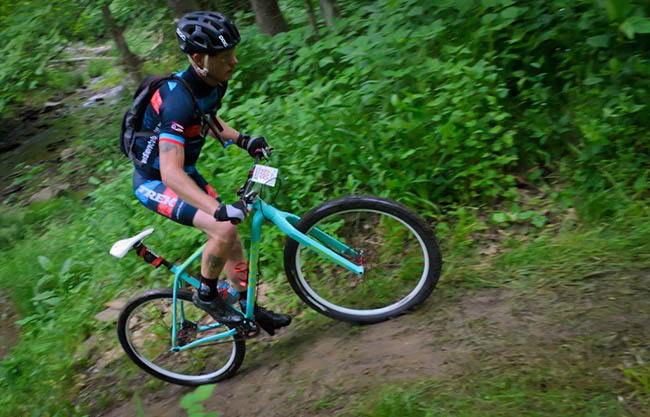 Litzinger gets the W with a Sub Four

Following his first win in April at the Big Frog 65, James Litzinger, Napleton Elite Cycling pwrd by Dirty Harry’s, powered his way to the top as the only Master’s racer to go sub-4 hours on the day at 4:54:37. Litzinger now leads the NUE SS Marathon Race Series. Unaware that the 2016 race start was lengthened to accommodate a much larger field than the last time he competed here in 2012, Litzenger was surprised from the very start of the race.

“After finishing well at my first NUE Marathon race of the season, the Big Frog 65 in Tennessee, I was anxious to challenge myself at the Mohican 100k. Some of the guys from the Napleton Auto Elite team rolled into Loudonville on Friday evening heading straight to the “new start,” so we thought.

For some odd reason we thought the start of the race was going to be the same as the 2012 Mohican race. We drove up the opening climb and made the first left heading back to the pig farm thinking that was going to be the start of the race. After checking out the start we went down to packet pickup to get all signed in and ready for the race. We had a late dinner after doing a short pre-race spin then off to bed nice and early to get rested up for the Mohican 100k!

After fueling up my bottles with Hammer Perpetuem and my pocket with Hammer Gel we rolled on over to the start of the race.  I was nervous for the start of the race knowing that there were so many strong riders in the 100K SS category! I was in awe when I saw all 600 mountain bikers ready to start a race. I was on the start line with some teammates and an occasional competitor and friend, Don Powers. He is a super strong rider and the winner of the 100 mile SS race. We had planned to ride together until aid station 3 when the race splits to the 100k finish.

After the start, I was trying to stay toward the front of the race so I could get into the single track early, since I thought there was going to be less road in the beginning. Well, that plan went out the window when everyone passed where I thought we were going to turn.  I was really wondering if I was going to have enough gas in the tank to spin all the way to the single track and keep my good position. Initially, I wanted to ride with Don Powers until the split at aid station 3 but after the first climb out of town I was able to hitch a ride on the wheel of my teammate Joe Fraas and Don wasn’t able to join us, #sslife!  Joe was an absolute mule helping pull me all the way to the start of the single track.  Thanks Joe!

With my good position in the opening single track, I thought it would be a good time to push the pace and try to open the gap on the SS competition. My Maxxis Ikons were gripping extremely well on the fine Mohican Trails, so I decided to keep up the pace with a few geared riders!  We had a nice pace, so I decided to continue as planned and skip through the first aid station.  After finishing up the single track, I was lucky enough to hook up with 100k rider, Bradley Cramer and 100 miler, Gregory Jancaitis.  These guys were pulling like horses on the county gravel roads and I was super excited that they let me spin with them!  We stuck together for most of the way until shortly before aid station three were they surged ahead to push up to some other geared competition of theirs!

Leaving aid station 3, I was all alone spinning and tucking my way down the road until the Valley Stream road climb. I knew that when I was finished with that climb the final single track would be coming up shortly! I spun my way down the rest of the rolling roads and through aid station 5. I was thrilled for the final single track knowing that it would take me down to the finish and it would be difficult for others to make up a lot of time on me. The single track was going well, until I was pushing a good pace up a climb and made a wrong turn taking me up a hike a bike, across a ridge, and down into a valley. I ran into some hikers that informed me that I was off course!  Oh No!  I quickly backtracked onto the course.  I figured that I lost about seven minutes with my wrong turn so I was not sure who had went by me at that point.  This made my adrenalin kick in and help me to push a good pace to the finish.

The final piece of single track was just as fun as going through it on the way out! Time flies when you’re having fun! I was so relieved and satisfied when it was announced that I had won the 2016 Mohican 100K SS race! My next N.U.E. race is the Lumberjack 100! 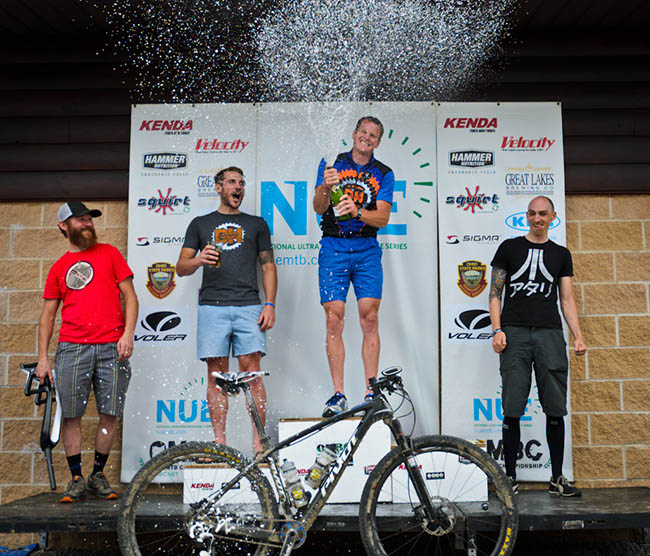 I couldn’t race without the support of my wife and three boys!  They motivate me to always do my best.  Thank you to Dirty Harry’s bike shop, my teammates at Napleton Auto Elite cycling, and all of our generous sponsors.”

One minute later, Ernesto Marenchin, Pivot Cycles, Twin 6, WAS Labs, winner of the True Grit 50 in March, took the final podium spot at 5th in 5:09:31. Marenchin continues to be a top contender for the NUE Marathon SS title.

52 year old Craig Cozza, UPMC Cycling Performance/Pro Bikes, made a statement with a commanding lead in his win at Mohican 4:58:09. “My first NUE and certainly the longest mountain bike race I’ve ever done. I’ve had a lot of fun and wins racing time trials, road, crits, CX and mountain bike over the last five years, 2015 CX national champion and silvers in 2014 and 2016.

This race was epic for me, loved the entire scene. So My teammate Don Powers rolls up beside me about thirty miles in on a steep dirt road climb, lays a fist bump on me and says let’s go get this, two wins, you and me, as he rode by me with second place Rege on his wheel.

I got them back on the flats but was amazed at how fast those guys ride those single speeds! Gauging and dosing my effort was important. That Way motivating moment carried me through the rest of the race! I went into time trial mode on the back roads, passing a lot of guys if there wasn’t anyone to work with. Then, I just focused and flowed through the woods. Awesome race, thank you!!! Four of us from Upmc/Pro Bikes raced, Johnny and Matt Crawford placed 4th and 9th respectively.”

Click Here for full results from the all categories 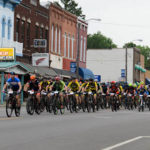 Hundreds of racers charge off the start line and through Loudonville, Ohio, at the start of the Mohican 100. Photo by: Butch Phillips Photography 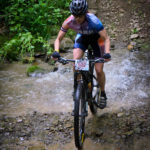 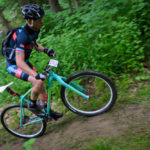 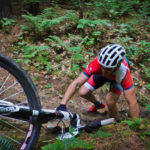 Slick conditions caused many falls during the Mohican 100 an conditions would get worse as rain started falling later in the day. Photo by: Butch Phillips Photography 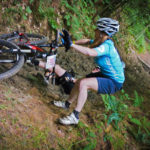 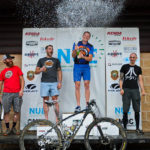 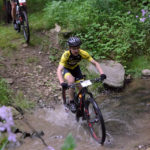 Christian Tanguy powers through the water early on in this 100 mile challenge. Photo by: Butch Phillips Photography 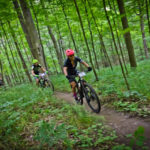 Linda Shin makes her way through the dense forests of Ohio on her way to a race win. Photo by: Butch Phillips Photography 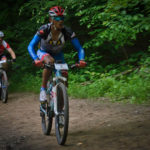 Federico Ramarez made the trip from Costa Rica to ride in the front group all day in Ohio. Photo by: Butch Phillips Photography 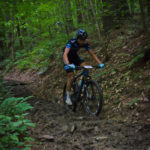 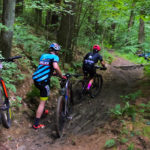 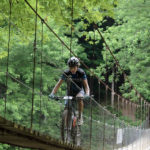 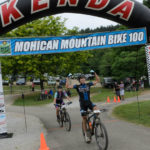 Dylan Johnson strikes a triumphant pose as he takes another NUE win for 2016. Photo by: Butch Phillips Photography 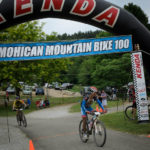 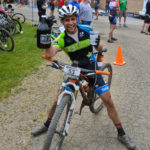 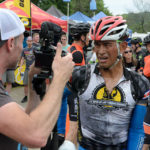 Ramarez just after the finish. Photo by: Butch Phillips Photography 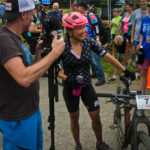 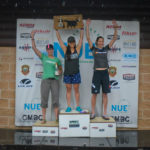 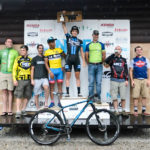