The NUE series headed to the San Bernardino mountains in sunny Southern California for the Grizzly 100k, 75k races and Grand Fondo. This was the final NUE race of the 2018 season and determined the NUE overall titles.

Starting around 7000 feet above sea level in Big Bear Lake, CA, racers were challenge to a high altitude course with technical singletrack, loose descents, and the all famous 5 mile Radford climb. 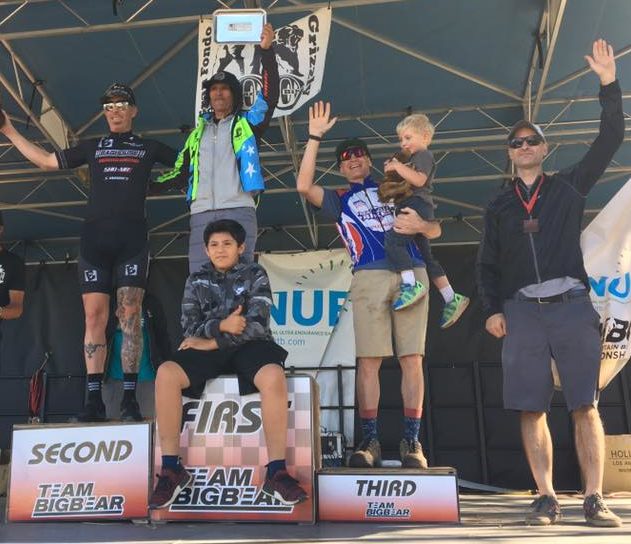 “The 75 k starts out with a climb that takes approximately 20 minutes and then enters the long technical downhill of the 7 Oak Trail.  I entered the 7 Oak Trail in second place about a minute or two down on Tinker Juarez.  After the long descent there is a long gradual dirt road climb to the top of the Santa Ana River trail.  Ty Kady passed me just before entering the SART and I rode alone until I reached the infamous Radford Road climb.  During the hour long Radford Road climb, I came close to reaching Ty in second place, but I was not able to completely close the gap.  At the top of Radford, I rode alone on the Skyline single track to the finish of the race.
I was very happy with my day on the bike and am always honored to stand on the podium with Tinker and Ty.  The Big Bear Grizzly is an excellent race.  Not only does it cover miles of the best single track in California, it’s also a race where you don’t have to worry about your nutritional supplies.  You could leave the starting line with one water bottle and there are enough stops along the way to fill up your bottle and get calories so that you don’t have to worry about carrying pounds of water and food with you.  The race is a culmination of the dream of Derek Hermon of BearValley Bikes.  Bear Valley Bikes also happens to support me and many other riders in Southern California.  Through Bear Valley Bikes, our race team also gets support from Cannondale, Oakley and Wren Carbon Components among others.Being a husband and father of 2, I don’t get to travel too far for races, so I am very happy to have this event in our hometown.  If you have never done the Grizzly, I highly recommend it.  Big Bear Lake is a beautiful part of Southern California where the town’s people really have a lot of passion for all of the different things they do.  There is a lot of mountain bike history in Big Bear Lake, and the town really supports the sport.” 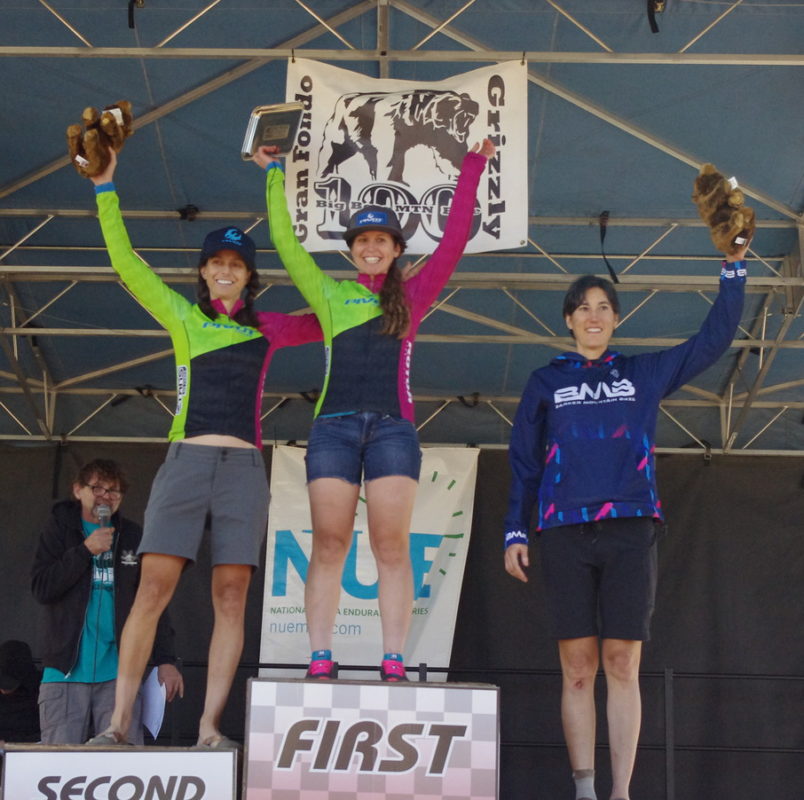 ” This was a big race for me.  My husband and I came early and pre-road the singletrack sections. I chose to ride my Pivot Les with all the climbing.  If I wanted to defend the series I had to have a strong smart race.  The race started fast.  Blanchard, Jen Hanks and I were all neck and neck on the first climb fighting for position.  My teammate, Jen Hanks, and I made some time on Blanchard on the first super loose downhill and eventually lost sight of her.  Hanks pulled away on the first flat dirt road section and I lost sight of her.

I was feeling good on the singletrack and then I hit my handlebar on a tree bombing a downhill.  Boom, I was thrown on my back landing on my pack and sliding into a rock that luckily prevented me from sliding down the mountain.  Another racer helped me up, made sure I was ok and sent me on my way.  My levers were all out of place and I a little shaken up but I had to focus.

Then came the Radford climb.  I knew Blanchard was strong on long climbs.  I gave it everything I had.  By the top of the climb I could see Hanks but surprisingly never saw Blanchard behind me. I had pre-rode the last singletrack section, the skyline trail, and knew what was left in the race.  Catching Hanks in the singletrack we exchanged words of encouragement and we pushed to the finish claiming first and second!

The Grizzly course was really fun and fast.  Derek put on a great event and hope to make it back next year! Thanks to my sponsors who helped make this race happen: Pearl Izumi, Pivot Cycles, SCC chain lube, Carborocket, Ergon, Xpedo, Continental, Stans, Kask, Rotor and Honeystinger.”

Just over two minutes back was, Jen Hanks of Pearl Izumi/Pivot Cycles MTB finishing strong at 4:49:00.

Taking the third spot on the podium was, Bryna Blanchard of BMB Racing finishing at 4:52:33.  Blanchard finishes second in the 2018 NUE women’s Marathon series with a win at Wilderness, second at Iron Mountain, second at Mohican and a third at Big Bear. 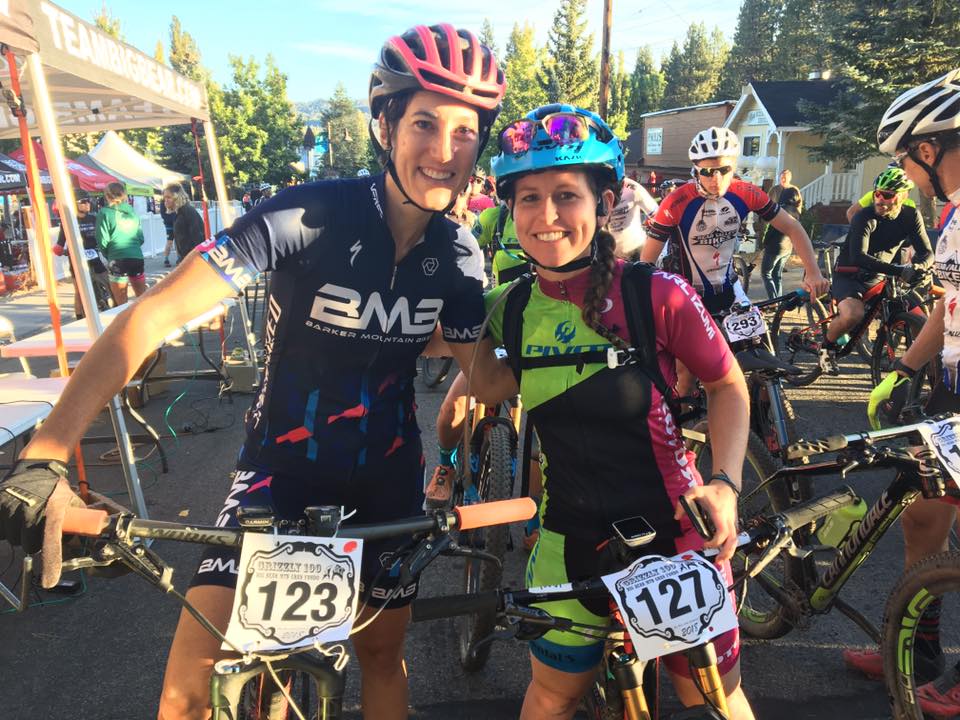 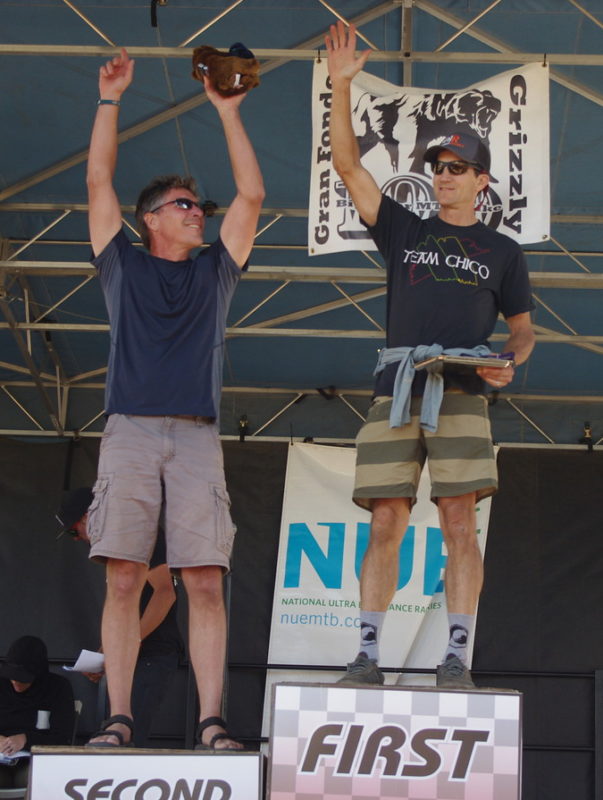 Taking the top step in the Master’s division was, Greg Golet of Team Chico, with a time of  3:54:10.  With this placing, Golet takes second in the overall 2018 NUE Marathon series.

“I was fortunate to arrive Friday and had a chance for a preride on the Santa Ana river trail. It was fun, but I took it slow and easy. In contrast, I got to rip it on race day! That section was my favorite, but really the whole course was a blast. The Radford climb seemed smoother than I remembered, maybe because it didn’t rain as much this past winter? Really, the only drawback was that the race ended too soon! When the turn came to head back to town, I really wanted to continue on the 100K course that I did the past couple of years. Riding the ridge line swooping between granite outcrops was hard to say not to, but alas, I needed a fourth finish in the marathon series. As usual the Big Bear team did a great job with the race, and I am thankful to the support of Honey Stinger, CarboRocket, and Wolf Tooth components. For me, one of the best parts of the trip was stopping on the way home to climb a peak in the magnificent High Sierra. Thanks NUE for giving me a reason to keep heading down to SoCal!”

Finishing a couple minutes back with a time of 3:56:21 was Mike Dailey.  Dailey finishes the season strong and takes sixth in the 2018 Master’s Marathon series. 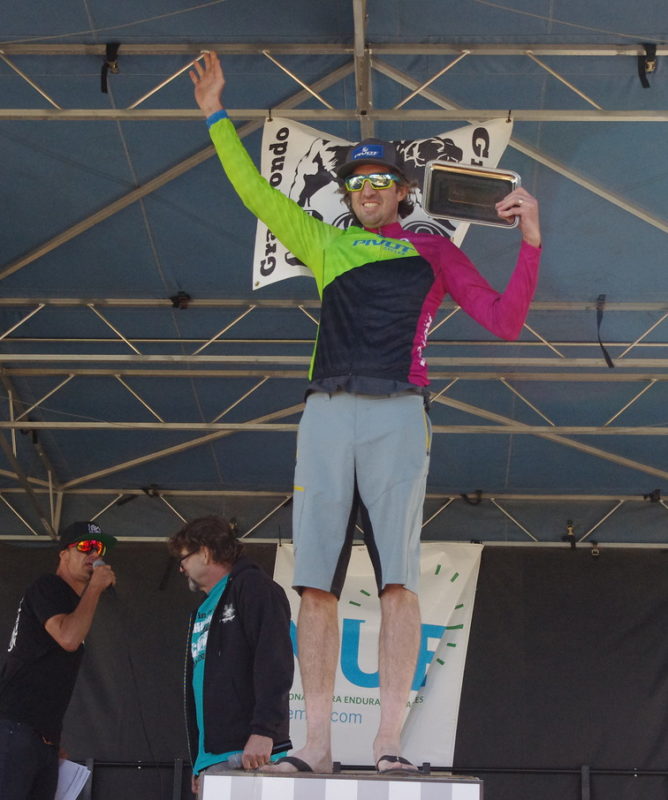 Taking the win in the singlespeed division was, Shannon Boffeli, Pearl Izumi/Pivot Cycles MTB, with a time of 4:15:05.