After a year hiatus, the Moab Rocks stage race made a triumphant return to the race schedule. Organizers made the switch from the usual October date to March with great success. This year the fields ballooned from just 70 to 80 riders to a fully sold-out 150 riders.

The full field was a buzz on the start line rolling out from downtown Moab and heading out Sand Flats road past the famed Slickrock trail before cresting the climb up to the Upper Porcupine Singletrack and descending the way back down to the finish. Riders were challenged by about 4,200 feet of climbing, almost all of which was in the first hour-long climb, and 27 miles of riding on one of the most iconic trails in all of Moab. 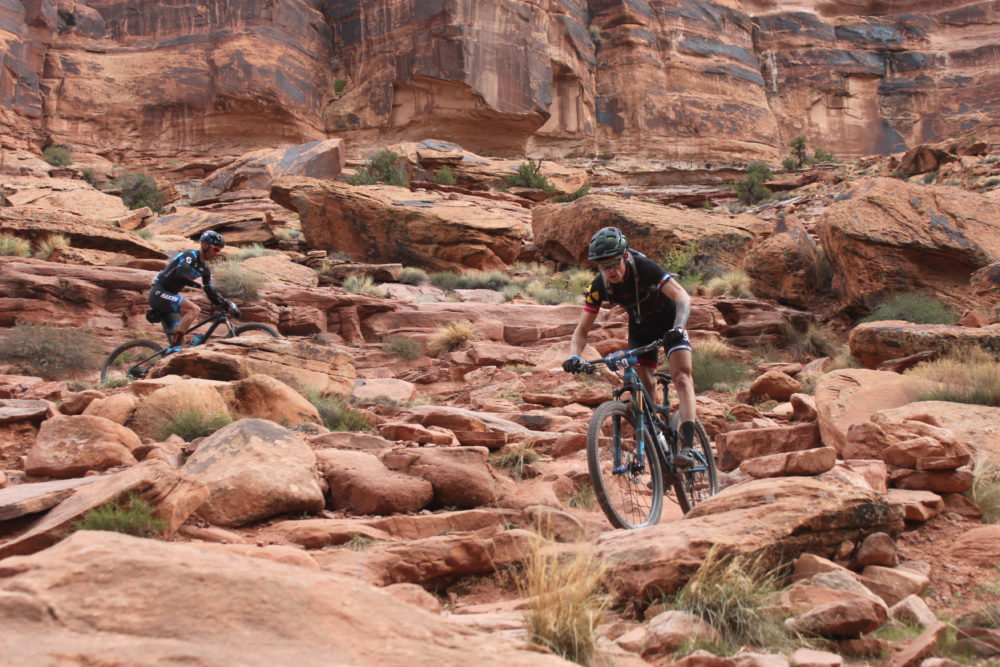 This group of four took control of things up front with Kabush eventually putting some sunlight between himself and the three chasers just before the singletrack started.

Now on the Upper Porcupine descent Lideen took up lead chasing duties finally bridging the gap to Kabush who had to stop for a dropped chain. Shortly after, Chris Baddick flatted, ending his shot at a race win.

Once again the group of four descended the hard-pounding drops of Lower Porcupine. Almost in sight of the finish it was Lideen’s chance to drop his chain producing the final selection of the day as the three leaders stayed wheel-to-wheel until the finish line.

In the end Kabush crossed first followed by Sonntag and Lindine. Lideen regrouped to finish fourth.

Almost without exception all riders enjoyed the day riding classic Moab trails. As usual Porcupine Rim produced enough carnage to end some rider’s day and pushing everyone to their limit. 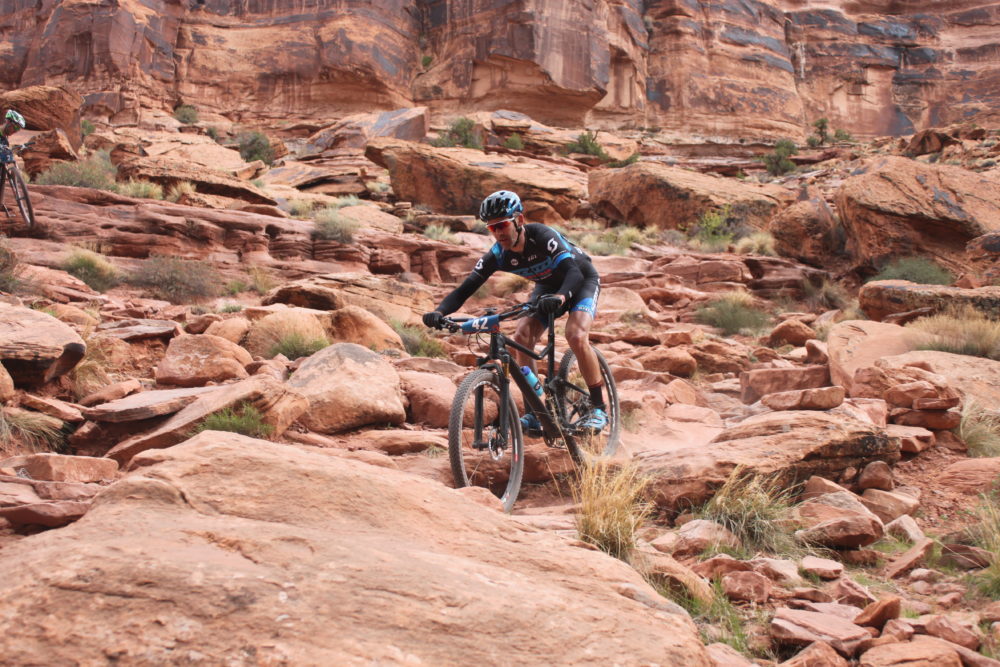 There was a fast group of female racers at the start line for Moab Rocks this year including Canadian and American Olympians Catherine Pendrel (Luna) and Lea Davison (Luna).

Once past the neutral roll out the women started to spread out with Pendrel, and Jena Greaser taking the lead.

Not far behind were a handful of strong women all racing close to each other pushing hard up the 15-mile climb.

The road includes some rolling sections at the beginning and not too far into it Marlee Dixon (Pivot/DNA Cycling) caught Pendrel and Greaser.

The three of them climbed together for most of the road with Dixon making a move to the front in the second half.  Pendrel caught up and rode with her and Jena right behind.

Once off the main road climb, Dixon tried to widen her gap on the singletrack, losing her chain twice, she was caught by Jena Greaser.

However, being unfamiliar with the course, Jena was off her bike and Dixon again moved into the lead.

Porcupine Rim is a technical, pedally descent going from smooth dirt to sand to gnarly rocks to drops.

Pendrel passed Jenna not too far into the descent and then five miles from the finish caught and passed Dixon as Dixon endo’ed over her bike.

Pendrel took the win; showing her strong technical skills and speed on the most technical stage of the race.

Stage 1 starts with a long road climb testing racers fitness then moves into a rocky, chundry descent where anything can happen.  For racers this is probably one of the most technical trails to race on.

For stage 1, Pendrel took the win, followed by Dixon and then Greaser.  For the 3 day overall, Pendrel is only racing one day so Dixon takes the overall followed by Jena Greaser and Maghalie Rochette (Luna) in 3rd.

Tomorrow’s stage changes things up with more trail and a hefty dose of slickrock as riders tackle the Klondike Bluffs trail area with another 27 miles and just 2,800 feet of climbing.

Check in tomorrow for full coverage on MTB Race News.