Blue Ridge Adventures presents the 12thannual Pisgah Stage Race. It takes place April 13th– April 18th  2020 in Brevard, North Carolina.  This 5-stage race takes riders on a tour of Pisgah, through the temperate rain forest sampling some of the best singletrack Pisgah has to offer. The race traverses over 140 miles and climbs 20000+ feet with scenic views, waterfalls, creek crossings, and is mix of 76% singletrack, 19% gravel, and 5% asphalt. As always, racers can also test themselves in the timed enduro section on each stage which has its own unique awards and overall crown.

The Pisgah trail system has always been know for its natural ruggedness but sometimes even the best trails require much needed TLC. Crews have been hard at work making some of the most popular trails in the area even better for 2020. Maintenance has been completed on upper/lower Black Mountain, Avery Creek and Bennett Gap, which ironically are all in stage 3. 2020 is gearing up to be one of the best yet!

2020 will debut some exciting new categories; women’s grand master 50+ and a duo 80+ or 100+ team category which require the teams combined age to equal 80-99 or 100+. There are some fast racers in all of these age groups so the competition should be fun to watch!

Still debating? Don’t wait too long, there are limited spots left for a week full of roots, rocks and repeat! CLICK HERE to get registered.

Five days of racing over the roots and rocks of some of the best singletrack in the U.S. found just minutes from downtown Brevard, North Carolina is set to begin next month when the 7th Annual Pisgah Stage Race kicks off for the first time as a spring event. The event, which covers a total of 120 miles over five days with over 20,000 feet of elevation gain, consistently draws an international field of competitors, as well as some of the top athletes in the country to compete.

Those who experience the thrill of riding some of Pisgah’s best trails for the first time have consistently been impressed with the quality of the trails in the area. One of those was Adam Craig, a professional racer who sampled Pisgah during a recent stage race and was blown away by the trails the stage race took him down.

“After this week, I’m going to say (Pisgah National Forest) is definitely in the top three places in the universe I’ve ever ridden, maybe the best one,” he said after the race. “I think the Pilot Rock trail is probably the best downhill I’ve ever done.” 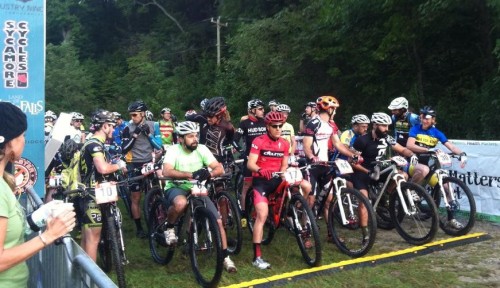 Riders at the start of the 2014 Pisgah Stage Race. The race moves from October to April for 2015.

It’s not just Craig who agrees that Pisgah National Forest is among the best places to ride. In recent months and weeks, the accolades of the riding in Pisgah National Forest continue to flow in with Singletracks.com naming Pisgah one of the Top 10 Mountain Biking destinations in the country and recently ranked the area as the number one place mountain bikers from the Southeast want to visit this riding season (http://www.singletracks.com/blog/mtb-trails/mountain-bike-tourism-by-the-numbers/).

For race organizer Todd Branham, getting to show people that are new to the area and haven’t experienced Pisgah before is a big part of the appeal and one of the main reasons he and the rest of the team at Blue Ridge Adventures enjoy putting on the event each year. He said he believes the Pisgah Stage Race is not only a great racing event for those with a competitive streak, but also a great way to experience some of the absolute best trails the area has to offer thanks to the support provided throughout the week. In addition to having well-marked turns and helpful course navigation throughout each day’s race course, the event also offers fully-staffed aid stations with bike mechanics to provide support for racers throughout the day, which makes hammering out a long ride all the more enjoyable and allows rider to push it just a little bit harder than they normally would.

“The course includes the East’s most rugged trails,” Branham said. “But after spending a week getting to know and appreciate the bounty of Pisgah National Forest, you won’t want to leave.”

Branham said he decided to move the race to spring this year as a way to try and boost attendance in the event and showcase just how beautiful the forest is during early spring. “We’ve moved the PMBSR to the spring this year and we’ll be the first stage race on the calendar for the United States,” he said.

“In the fall Pisgah is very Robust from the summertime, green and briery…thick. However, in the spring, you have a nice green carpet on the ground. You can see everything, the views are more open. Nothing is really grown in yet. Flowers are popping up… Mushrooms are everywhere. It’s quite a different experience, equally as nice as it is in the fall.

“I’m really excited about the spring event this year,” he added. “It should be really good, and quite different from the past.”

Popular Aspects of Race Return in 2015

Returning this year are the chip-timed Enduro segments during each stage that will allow the fastest descenders in the endurance world to make their mark during the stage race and earn prizes and awards in individual categories. State-of-the-art timing systems record each rider’s time at the start of the Enduro segment and again as they pass through the Enduro structure at the bottom of the course to record riders time without causing any unnecessary slowdowns for participants and will allow riders to continue to ride normally along the route. The “enduro” section will be included with registration fees and applicable for all participants in the event with special Enduro awards held each night during the award ceremony.

“This year we will have a full six nights of food, and it will be really cool to get everybody out to watch the racing video produced from the stage everyone just raced,” Branham added. “We’ll go through the results, present the podiums, hang out, have a good time, trade stories about the day’s stage, and then prepare our racers for the next day’s upcoming stage.”

Singletrack Highlights During The Race

For race director Todd Branham, every trail riders take on during the stage race is special in it’s own unique way, but some of his personal favorites that riders will get to enjoy this spring include Pilot Rock and Laurel Mountain, an area classic that remains among the most popular trails for experienced mountain bikers. “It’s a big climb up to about 4800 feet and you go through different zones on the mountain,” Branham explains. “As you climb you’ll ride through classic rhododendron tunnels, but as you gain elevation to the top, it opens up and you get those big, wide open vistas.” But that’s when the downhill begins, which is among the rockiest in the stage race, other than renowned downhill trail Farlow Gap.

Squirrel Gap is another of Branham’s favorite trails that he believes provides racers with a truly unique experience that defines the Pisgah riding style. The narrow singletrack is so tight in places that Branham refers to it as “half-track.”

“We are a temperate rainforest here in Pisgah, and things are very robust in the way they grow,” he said. “When you ride here you can see all the fresh trail work we do, but we can’t do enough to keep back all the growth that can reach out and grab at you. By the end of the stage race, you will have scratches on your arms, you’ll have scratches on your legs, and you’ll look like you’ve ‘been through the bush’. That’s the Pisgah Lion. You don’t know when it’s coming, but it will reach out and grab you.

For more information on the Pisgah Stage Race and to view videos of each stage during this year’s event, follow along at www.blueridgeadventures.net + www.pisgahstagerace.com.