The 2016 Founders Lumberjack 100 racers were greeted by cool morning temps in the 50’s and brilliant sunshine as the 413 racers toed the starting line for the for the 12th annual race through the Big M trail. The racers knew that the first 33 mile lap would be the most comfortable as temps were expected to reach close to 90 and the humidity would make it feel like a tropical rainforest by noon.  The race directors designed a new start that removed some of the roll out pavement and replaced it with two track and single track that allowed more jockeying and racing from the start.  After 4 miles of positioning the field came through the pits and finish area to cheers and cowbells as they made their way towards the first separator the “Bullwacker” climb.  It was two new faces to the Lumberjack race Dan Yankus ( Team OAM) and Brad White ( United Health Care) that lead the charge with familiar LJ 100 race faces; Mens open champion Brian Schworm (Think Green VO2), Vanias ( Team OAM), Quiring ( Quiring Cycles), Jan Roubal (Velorution), Mike Simonson (The Bike & Tri Shop) Golas, Gross and Catlin looking to make the selection. The women’s open field of  37 was lead by Chase Edwards (Flagstaff Bikes)  and on her wheel was LJ 100 first timer Kaitlyn Patterson ( Team OAM) and last years women’s champion; Mari Chandler ( Team Adventure) 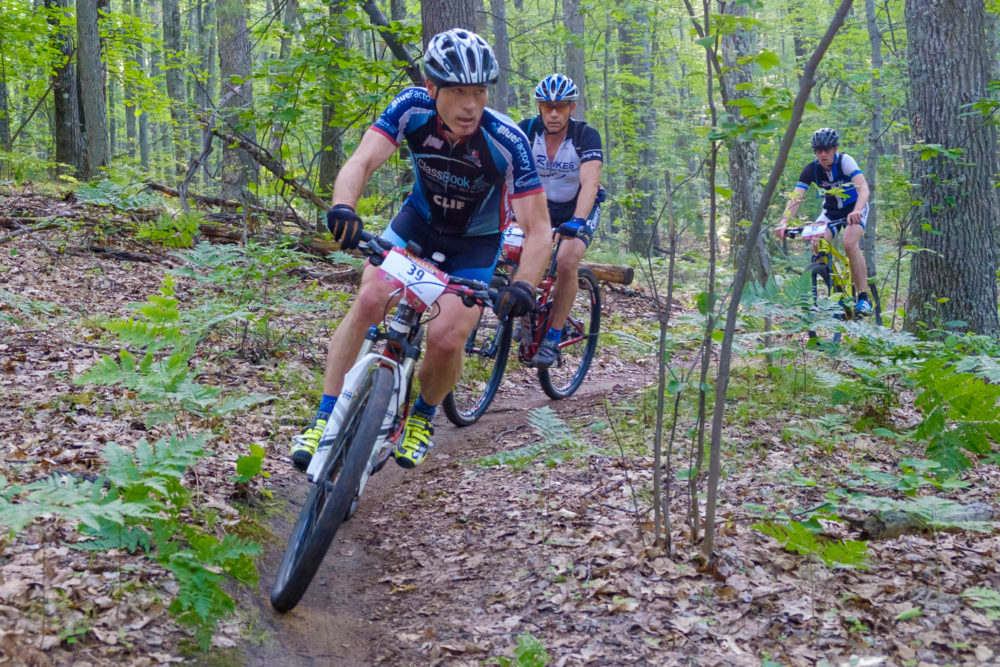 The Lumberjack race course is in the Manistee National forest which is just under a million acres of solid hardwood forest. The 33 mile loop is 90% singletrack with hard packed sandy soil  and rolling hills that challenge racers with close to 3,000 feet of climbing per lap.

Even with the crisp morning temps it didn’t take long for things to heat up as Scott Quiring pushed a red line pace on the front for most of the first lap with nine others staying in contact. As the leaders made their way into the support area (16 mph avg. speed) it was Yankus, White, Simonson stopping in first with seven others within a minute. Most riders stopped 5 – 10 seconds to reload with food and hydration but it was road pro racer White who never slowed and grabbed his fuel mussette style and  was the first on the trail starting the second lap. Things got testy as Quiring, Yankus, Simonson and White attacked trying to shake off anyone from the top 9 lead group. Half way through the second lap Quiring and Roubal  dropped off having pushed too hard and Mike Simonson caught a bad break with his tubular tire going flat. The second lap leaders were down to four with Vanias, White, Yankus and Schworm a minute ahead of  Catlin and Gross.  Just after the half way point of the third lap, Schworm decided it was time to make a move and not allow White or Vanias a chance to attack on the two track section with 8 miles to go. Brian Schworm finished four minutes ahead of Vanias and five on White as he tore up the last five miles of the Big M tail finishing just off a race record at 6:30:09 for back to back Lumberjack 100 championships.

The women’s open race saw Patterson and Edwards battling back and forth for the first lap with  Patterson hitting the support area at 2:27 just 30 seconds ahead of Edwards. Last years Women’s open Champion, Mari Chandler couldn’t hold on to the pace and found herself over 10 minutes back after the first lap.  The second lap Patterson decided to push the pace and never looked back as she peddled through the second lap pits with nearly a two minute lead over Patterson and held that gap to finish her first Lumberjack 100 as the Women’s Open Champion at 7:27:27 followed by Edwards 7:29:51 and Chandler 7:51:58. 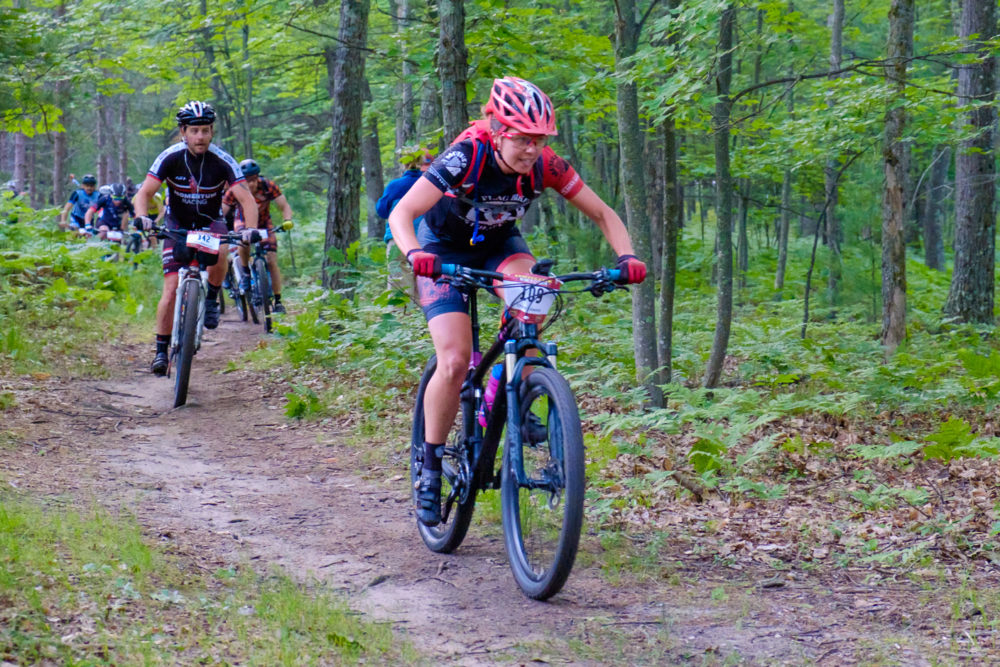 The Single Speed race got off to a fast start with everyone going hard trying to get to the fast and flowing single track and first big climb ahead of as many racers as possible.  James Litzinger ( Napleton Elite) in his second LJ 100 appearance saw his last single speed competitior shortly after the “Bullwacker” climb and latched on to a group of geared riders including teammate Joe Fraas and Master’s winner Jeff Clayton pushing a steady pace on laps one and two. Litzinger said ” Joe and Jeff worked like semi trucks pulling on the road and I kept us rolling on the single track while grinning ear to ear!  It was so much fun riding and working with those guys!  I felt like The Lumberjack 100 was a TEAM effort!”  Litzinger got his first NUE series win with an impressive time of 7:13.  The real single speed race was between Alexander Steinhoff ( Treefort Bikes) and Mike Bernhard ( Founders Racing) who was fresh off his single speed win and 13th overall finish at Dirty Kanza. These two spent the day duking it out and exchanging position until the end of lap two when Steinhoff gaped Bernhard and held on to second place by less than a minute. 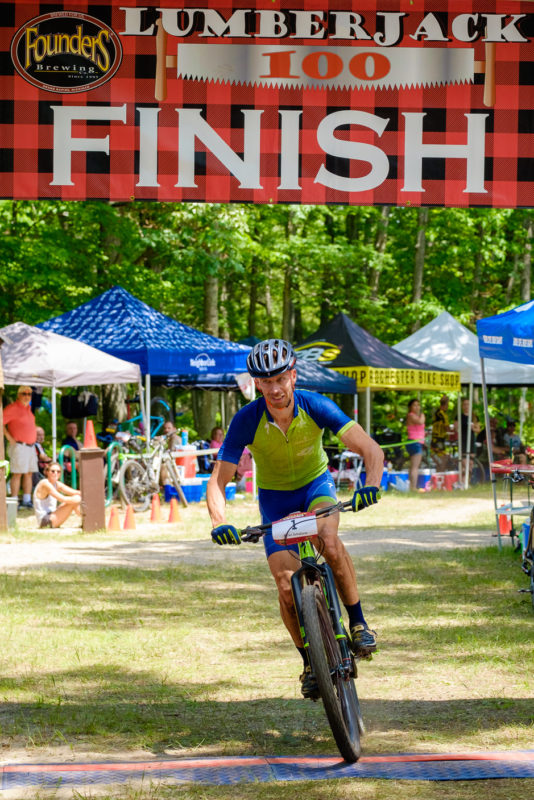 Lastly the Master division race saw Georgia native, Jeff Clayton ( Georgia Neurosurgical Institute) work with Single Speed winner James Litzinger and Joe Frass to set a blistering pace from the start creating a large gap over competitors Terry Blanchet and Mark Donakowski.  Clayton never faded and ended up finishing in just over his goal time of 7 hours with a time of 7:04 followed by Blanchet 7:44 and Donakowski 7:50. 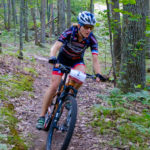 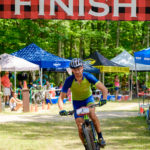 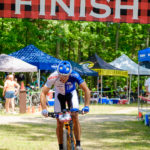 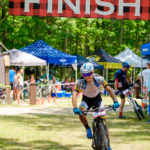 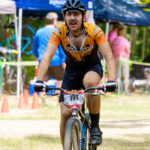 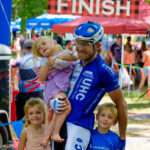 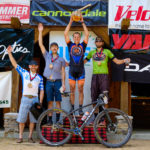 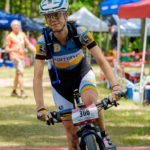 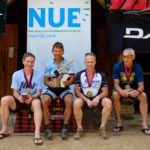 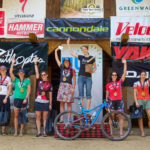 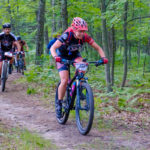 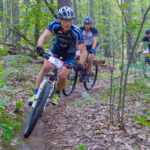