Day 5 of the Breck Epic is the Wheeler trail. Or you could call it; I climbed 4000 ft of elevation in the first 10 miles of the course today and spent a lot of that time pushing my bike up the mountain!

New this year, the course changed and instead of dropping down the back side of Wheeler trail into Copper and taking the bike path back to Frisco, racers descended about a mile of the Wheeler trail over Wheeler pass then climbed again up Miners Creek Trail. As Serena Gordon said it so sweetly this morning, “not only do we get to ride our bike today.. we get to go for a hike also”.

And we all got to go for a long hike-a-bike up Wheeler trail and also Miners Creek. Today was the most technical day out on course and for a lot of categories it changed things up. This was really cool to see and I think it was a good change from the old course despite being a grueling kick in the gut climb. 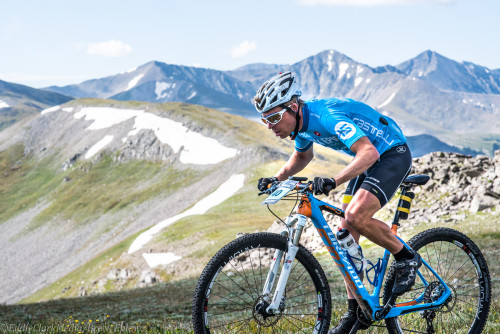 Overall for the course today was 24 miles and gained 4600’ of elevation.   The course climbs for the first 10 miles followed by a mile long descent then up again for another 2-3 miles of climbing and 1200 feet of elevation gain. At this point you are on top of the 10 mile range and it’s breathtaking. Not many people ride up there and although it’s the shortest day, it’s the burliest.

The descent down Miners Creek is technical and exposed. Once down miners creek it’s the up/down Peaks Trail back to Peak 7 then one final mile-long climb up the ski resort to the midpoint on Peak 8 before riders descend the Wanderer trail back to Beaver Run and the finish.

Highlights of the day were definitely the breathtaking beauty of being on the 10 mile range, Skittles (and bacon for some) on the top of Wheeler pass, and the technical fast descent down Miner’s Creek and Peaks Trail. 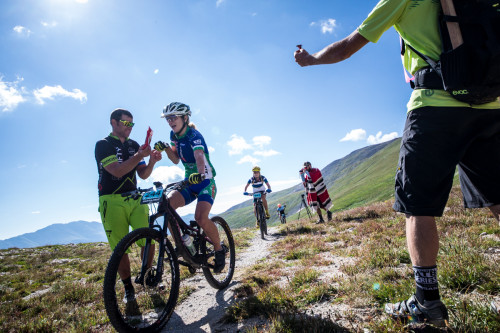 For the Epic 6 day Women’s open it was Evelyn Dong (Shoair/Cannondale) and Kelly Boniface (Moots) climbing and hike-a-biking in the lead up Wheeler trail with Marlee Dixon (Pivot/Epic Brewing) and Serena Gordon (Liv/Giant) close behind.

Evelyn got a little ahead of Kelly by the time they reached the top of the Peak 9 road and not long after Marlee passed Kelly right before the top of Wheeler pass with Serena passing Kelly on the Wheeler pass descent. 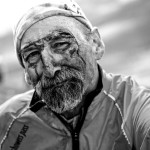 A gentle smile through a hard day. – Photo by Liam Doran 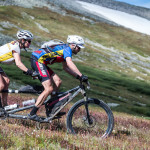 Sam and Katie from Durango clear many sections on the high alpine, rocky terrain that most could not. – Photo by Liam Doran 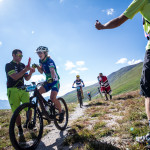 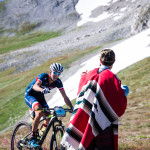 On the fifth consecutive day of racing, the top three men were happy to partake in the bacon and skittles feed atop of the first climb. – Photo by Liam Doran 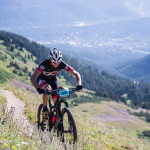 Bryan Dillon was the first to crest the Wheeler Pass climb. He went on to go wheel to wheel with Ben Swanepoel fighting for 2nd. Dillon followed Swanepoel’s wheel for the majority of the last section of trail. As they approached the finish line, Swanepoel blew a corner, providing an open line for Dillon to pass and take 2nd. Instead, Dillon waited at the line allowing Swanepoel to finish first. – Photo by Liam Doran 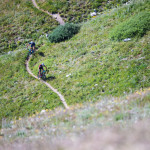 Bryan Dillon and Ben Swanepoel go wheel to wheel as they approach the infamous Wheeler switchback climb to the summit. – Photo by Liam Doran 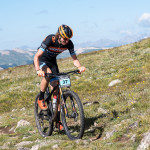 Seen here at the Breck Epic stage race, Barry Wicks knows how to train for multi-day events as he wins stage 5 of the 2015 race. – Photo by Eddie Clark 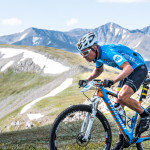 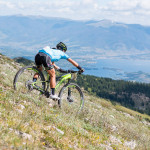