Keck Baker and Sonya Looney Dominate in the Desert

With a new start venue and key course redesigns the 2015 True Grit Epic provided a first-rate race experience to go along with the high-powered course appropriate for the 374 racers gathered to take the start.

Ultimately it was a rider from Virginia that made the biggest impact in the desert of St. George. Keck Baker showed amazing early-season fitness despite enduring a brutal winter on the east coast. Riding smart and clean throughout the race he managed his efforts in the most difficult technical sections and gave full gas on the climbs and open desert singletrack to cut down his rivals.

Baker had never ridden in southern Utah and due to shipping problems the Cannondale rider’s bike didn’t even arrive until Friday before the race. “My plan was to follow some of the local guys in the technical stuff the first lap” the eventual race winner said, “but I got stopped once on the Zen Trail and when I got back on the guys I was with were gone.” 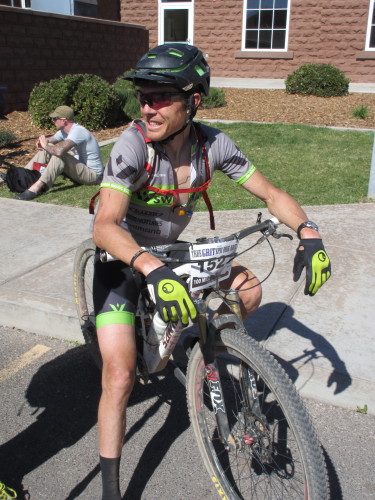 Josh Tostado and Cary Smith (The Hub), both veterans of the True Grit Epic, had gotten out front in the slickrock gardens of Zen Trail and worked hard to keep their advantage but with just over half of the first lap gone by Baker had worked his way back to the front and took control of the race.

The second pass through the Zen Trail went much better for Baker sacrificing some time on the ledges and jarring downhills but not enough to let second placed rider Cary Smith make contact.

After Zen the remainder of the race went by in a flash as Baker took his first NUE win over 5 minutes up on Smith at the finish as Tostado finished in third.

Having just returned from the 6-stage Andalucia Bike Race, Sonya Looney wasn’t sure how her legs would respond. It didn’t take long for her to find out as she moved to the front in the opening miles and never looked back.

After a mechanical tanked her 2014 True Grit Epic Looney was determined to improve her 2015 result. Indeed it seemed her Andalucia effort only strengthened her fitness as she was simply unstoppable throughout the 90 miles of desert riding.

Amanda Carey settled happily into second place enjoying the warm weather and opportunity to put miles under her wheels both of which have been hard to come by in her home just outside Jackson, Wyoming.

Marlee Dixon followed Carey throughout the first 45-mile lap. Halfway through lap two the 80-degree heat started to catch up with the snowbound Breckenridge racer. After suffering through a second trip around Zen Trail with an uncooperative stomach Simril overtook the Pivot rider to move into third.

Riders stayed in this order until the finish.

Sonya Looney was elated with her win and enjoyed her time riding the challenging True Grit course.

At the finish riders were treated to live music and food as they cheered in the remaining riders on course. 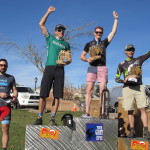 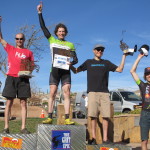 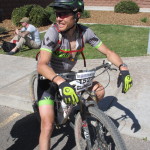 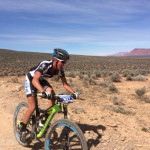