The Shenandoah 100 achieved a major milestone in the history of endurance racing celebrating its 20th Anniversary as the oldest race in the NUE Epic Race Series. Held within The George Washington National Forest of Virginia, Shenandoah marks the start of the fall season of the NUE Series with just two races remaining that will determine this year’s champions. Shenandoah is a highly anticipated showdown showcasing top level talent in a festive atmosphere with most racers choosing to camp out at the Stokesville Lodge and campground. This year, rain leading up to race day made course conditions slick and treacherous at times although race day weather was warm and mostly sunny. 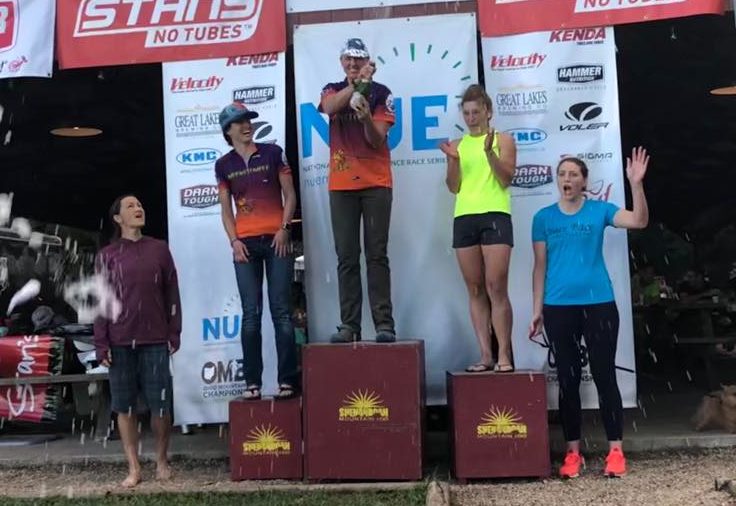 Following third place finishes in both 2016 and 2017, Laura Hamm, Moonstomper/Blacksburg Janglers, stepped up to the top of the podium with a winning time of 9:35:36. Shenandoah was Hamm’s first NUE win although she also posted a third place finish in the NUE Marathon Series at Iron Mountain 100 earlier this season. “Going into the race, my main strategy was to hang on to Lauren Cantwell’s wheel until I could no longer keep pace (likely around mile 20). I executed this plan expertly until mile 4, when Lauren’s sidewall was sliced by something mysterious, likely a trail gnome. 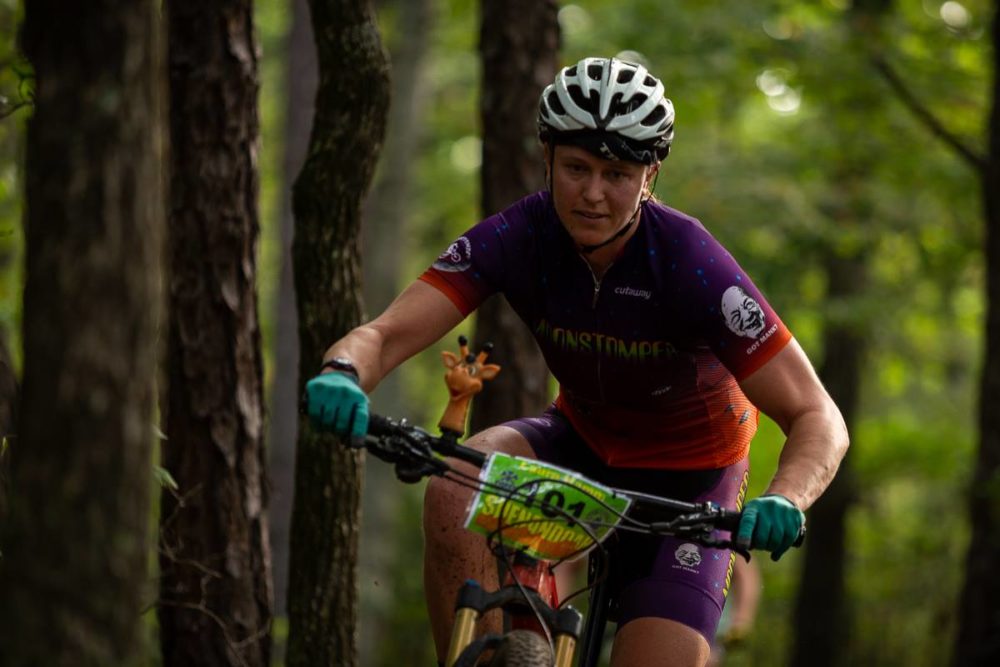 My only setback was getting stung by a stinging creature going up Lynn. Sam Lindblom was kind enough to stop and help me make sure that the stinger was out. I took a Benadryl to prevent a Michelin man-like reaction and carried on a bit sleepier than before. AJ Mooney pulled me through many of the road sections. I owe him a beer. The highlights of the race were my quick bathroom break with Victor “Little Wolf” Guevara, the costumed Charlottesvillle-ites, and beating Jon Rugh, my neighbor and nemesis. As always, Chris Scott put on a fantastic event on a course with endless smiles and world-class aid station volunteers.” 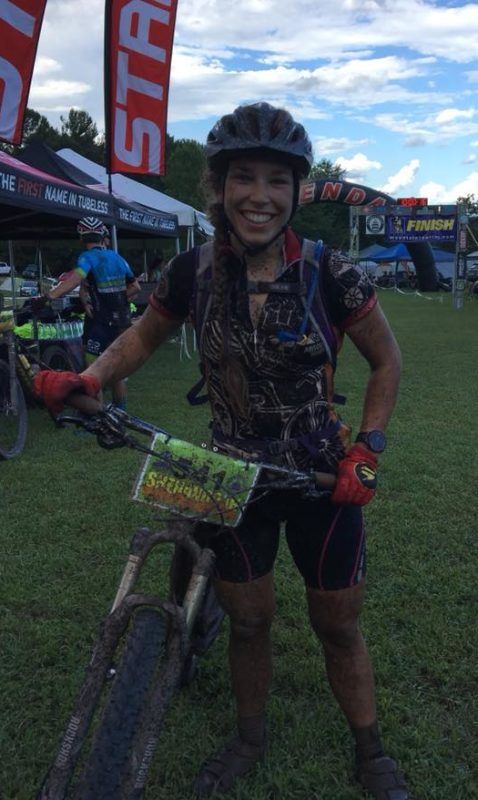 Following a third place finish at the NUE Series Wilderness 101, Amelia Capuano, Reardon Steel Fab, finished 10:00:02, taking second at Shenandoah. “I had a fun day and started off quickly, trying to stay towards the front. I settled in on the chill climb up Lynn trail and it was mostly steady going from there. I really loved the nice rip down Chestnut and lack of brakes to go with it after slopping through some WV-esque mud holes. Thanks to whoever made me eat a Sammy and chug some coke at aid 6!! Really, thanks to all the folks at aid stations – so helpful with chain lube, grabbing food, and making me laugh! I love these races and Chris Scott knows what is up!! Also, shout out to the legend, Cheryl Sornson, (former NUE Series Champion) for helping me learn the ropes of 100-mile racing. 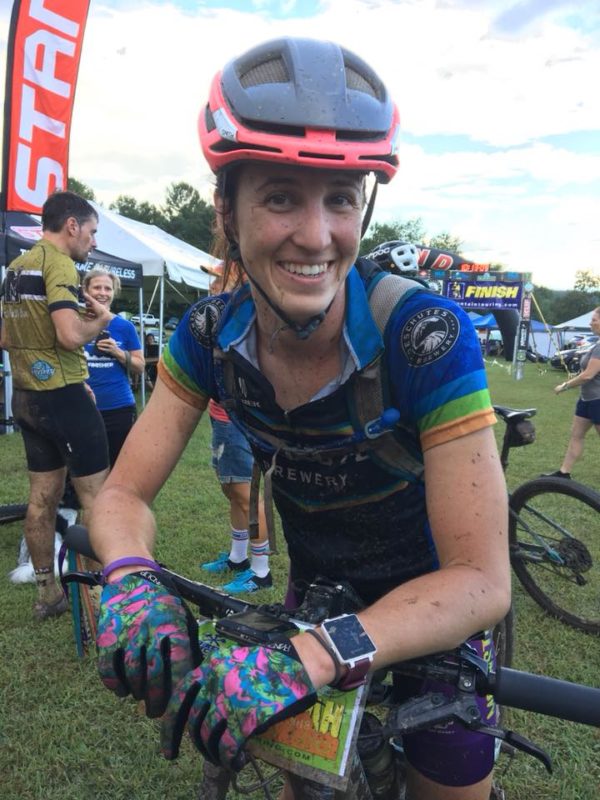 Twelve minutes later, Lauren Cantwell, Deschutes Brewing/Stokesville Lodge, claimed third at 10:12:30. Cantwell is now ranked second with 10 points in the NUE Series behind series leader, Larissa Conners. In addition to her first win at Cohutta this spring, Cantwell also posted a second place finish at Wilderness 101 plus fourth at Pierre’s Hole 100 in Wyoming and fifth at the NUE Season Opener at True Grit in St. George Utah.

Anderson goes sub Seven to get his first ever win at Shenandoah!

Coming off his first NUE win at Mohican in June, Two-time NUE Series Champion and Shenandoah course record holder, Jeremiah Bishop, Canyon Factory Racing, came in at 7:14:03 to claim second. “I would call it an off day. I can do some amazing things sometimes but I struggled to find my rhythm today. I felt lucky to pull myself back together and hold of Dylan for second.” 2017 Shenandoah race winner, Bishop, finished second overall in the NUE Series Men’s Open in 2017 and posted a ninth place finish at Wilderness 101this season. 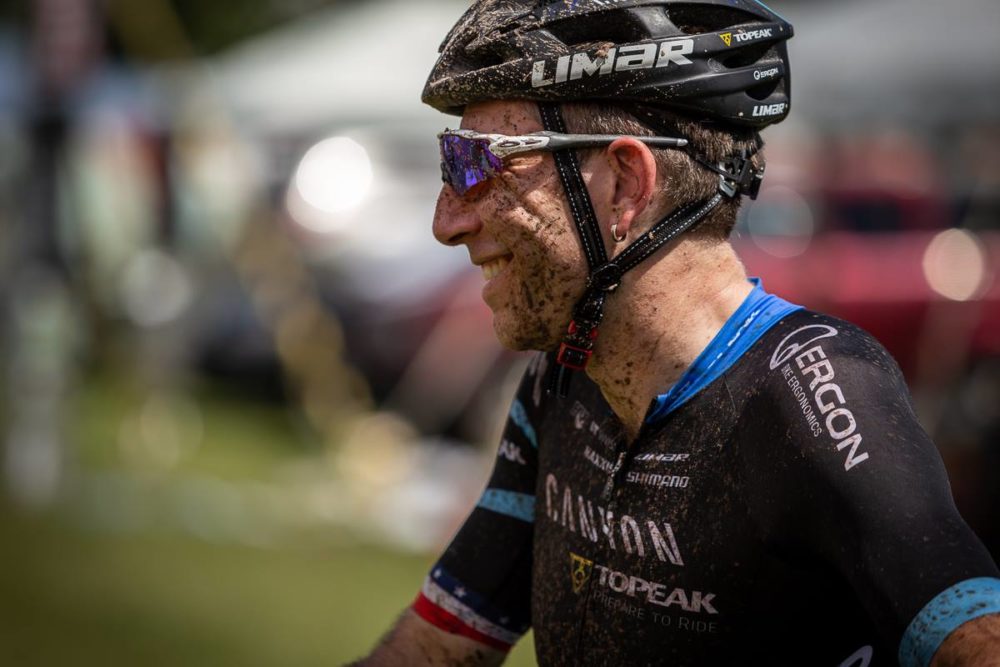 Eight minutes later, NUE Series Defending Champion, Dylan Johnson, Leska MTB, finished third at 7:22:46. Johnson leads the NUE Series with 6 points that include wins at the Cohutta 100 in Tennessee, Lumberjack 100 in Michigan and Wilderness 101 in Pennsylvania plus a third place finish at Tatanka in South Dakota. Johnson finished fifth last year and second in 2016 behind Jeremiah Bishop at Shenandoah.

“Shenandoah, as always, brought out some of the toughest competition in the series. Eddie’s pace up the second climb was too much for me and he and Jeremiah rode away. I rode hard to minimize my losses in hopes to catch up but I knew they would be a strong pair on the road sections. After that, Christian and I rode together to the base of the third climb after aid 2 and he dropped off there. The entire rest of the race I was by myself. It wasn’t a great position to be in given all the road and gravel that was still left but I had no choice. I was happy to hold off the group behind me to get third.” 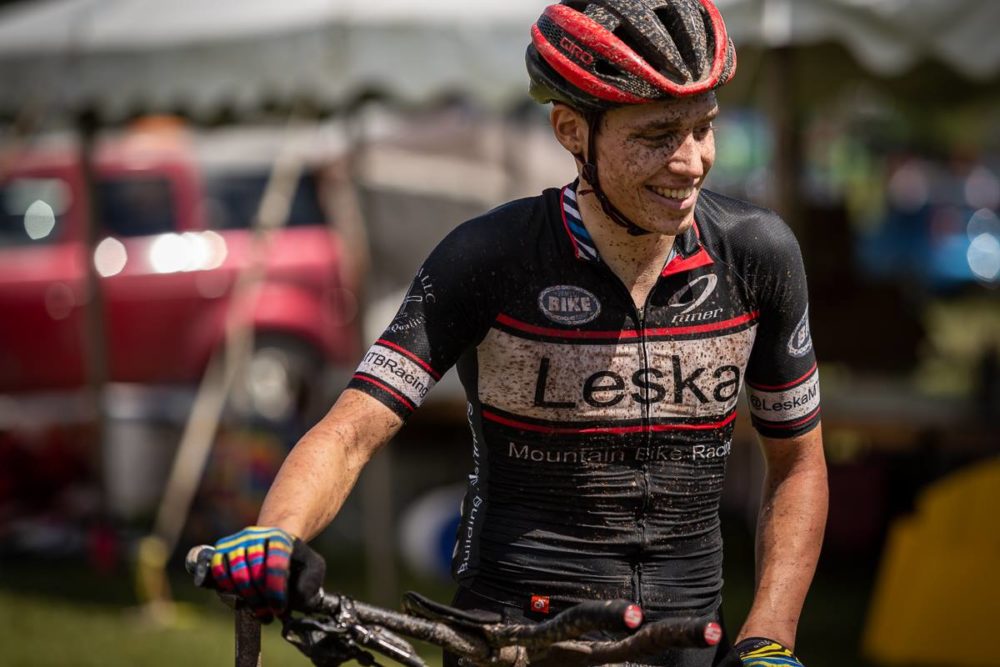 2016 Shenandoah race winner and former NUE Series Champion, Christian Tanguy, RBS Cycling Team, was sixth in the Men’s Open at 7:45:46, just one second behind SS winner, Gordon Wadsworth. Tanguy is currently ranked second in the NUE Epic Series with a score of 11 that includes a second place finish at Cohutta plus third place finishes at Mohican, Lumberjack, and Wilderness 101. In 2017, Tanguy place second behind Jeremiah Bishop at Shenandoah.

“My SM went really well. The conditions were about average for VA in hurricane season, slick and snotty, with periods of good hot sunshine. The past two years at SM have been record breaking conditions and so it was nice to see a classic VA race shaping up. As always, I knew my mission was get into a fast group and STAY there!

A lot of flats early in the game on a bonier than average Narrowback trail precipitated a chase group early. The rain made the normally rocky but manageable Narrowback/Tillman trails full on carnage of riders with mechanicals and flat tires. My K2N Stage Race teammate Thomas Turner and I bottomed out on Tillman Rd to see Chris Michaels in the distance. We chased up to Chris and as a group got the lead quad in our sights; nearly joining them before Lynn trail. On Lynn, we each rode our own paces (mine with a dash of walking) as we bridged up to Keck Baker. Now four riders strong, this group rode well together until Baker attacked on Hankey Mtn. We dropped Chris Michaels and eventually bridged up to a flagging Christian Tanguy. 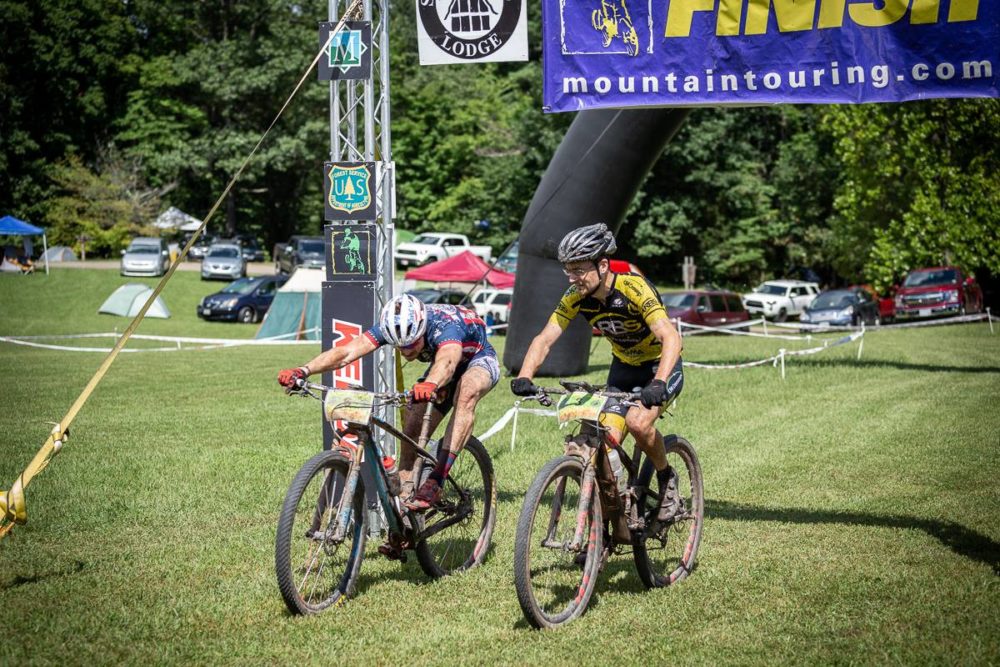 Wadsworth and Tanguy battle it out in a sprint finish. Photo credit: Jess Daddio

This new grupetto never set a chase worthy pace but stayed consistent in our effort to stay clear of any other riders. With Thomas barely sneaking away by a few seconds on the Braley’s Pond downhill, I led a pace back up to

Thomas and then we set out towards the Death Climb. On the approach into the climb, we were joined by our friend David Flaten. I asked Flaten if he had seen the always strong John Haddock recently and he replied that he had not. Flaten added a component of motivation to the mix and he and Baker attacked not long into the steepest part of the climb; separating Thomas and I from them and Christian farther off still.

Thomas and I rode together in our good old duo mix until nearly the top of the death climb up Reddish Knob. Near the top my SS pace dictated a little harder effort and I was sure he would join me on the Chestnut DH. A rider did but it wasn’t Thomas, it was Christian Tanguy. Christian and I have pedaled a few miles together over the years and I was glad for someone to share the line down a really grade A descent! Christian and I bottomed out together and then leapt out of aid 6 headed for the final ascent up Hankey Mtn.

On Hankey we climbed well together with Christian even offering to let me roll ahead. I had no interest in that as, at this point, I felt pretty comfortable in my lead. I got a little distance on Christian and then POW my chain derailed from my Pivot LES Singlespeed. Really unusual, but a chain stretched from 90 miles of VA steeps and gritty trail conditions made the unusual possible. As Christian passed I resigned myself to 7th overall. I re-set the chain and jumped aboard.

However, near the top of the Hankey climb, I saw Christian again and passed him just as we headed into the singletrack. I got a little more distance on him but, as we bottomed out on the gravel before the campground singletrack, I again heard Christian. He was clearly gunning for another position on the results sheet. He dove into the singletrack just ahead of me, doing a little blocking and, no doubt, aware of the charging that could happen at any moment. I let Christian lead all the way to the line before a hard corner and a half-hearted bike throw landed me that sixth position.

The Shenandoah Mtn 100 is a real deal mountain bike racers course. Full of everything that makes America great it’s my all-time favorite day on the bike and this year was no exception.” 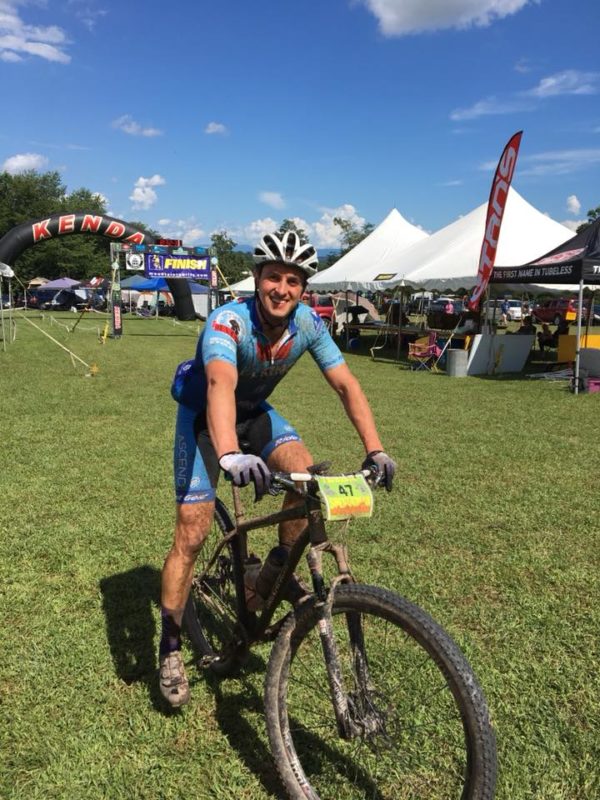 “As always, the much anticipated Shenandoah 100 was a blast this year. Conditions were tough, but that made finishing all the more rewarding. This would be the 4th race of the series for me and with school back in full swing, my plan was to ride my own race, hope for a good finish, and stay healthy. I got off to a good start and exited Narrowback with a group, but unfortunately they got away on Lynn as I went for an extended hike.

For the remainder of the race, I kept a steady effort, often time’s yo-yo-ing with some geared guys, but mostly by myself. The climbs rolled by and the descents were rejuvenating. I’m super happy with my race this year. Not my fastest time ever, but the course was slow and I felt great at the finish line. Congrats to everyone who raced and especially to my singlespeed amigos!” 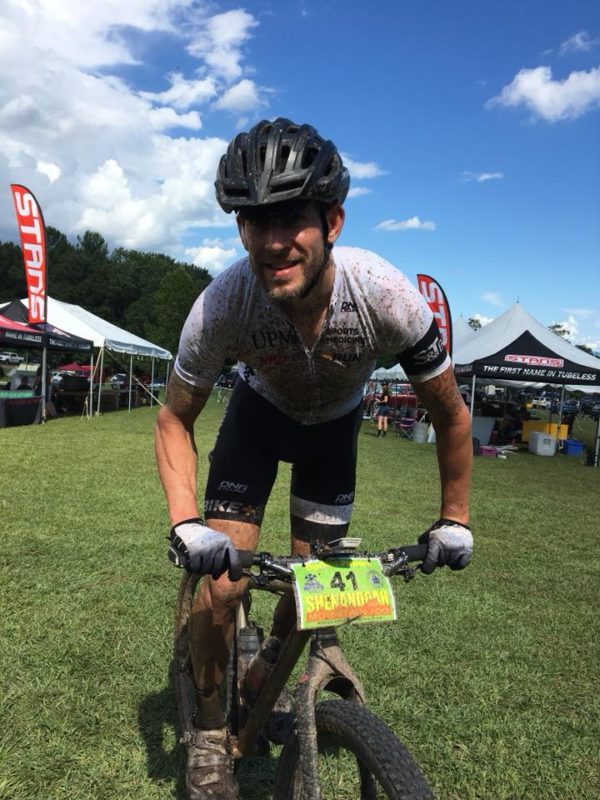 Bradley Cobb, Motor Mile Racing/SCV, was first in the Masters at 8:36:46. Cobb is currently ranked second in the NUE Epic Masters Series, behind Carey Smith, with a score of 8 that includes his win at Cohutta plus a second place finish at Lumberjack and fourth place finish at True Grit Epic. 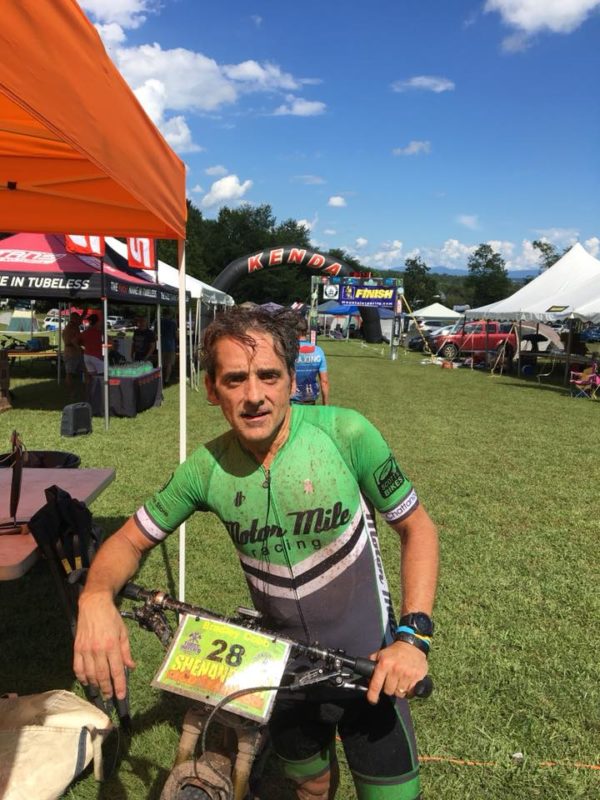 Former NUE Series Masters Champion, Roger Masse, Stokesville/Shenandoah Mountain Touring, took second at 9:01:51. Masse is currently ranked fourth in the NUE Epic Masters Series with a score of 11 including his second place finish at Cohutta, fourth place at Mohican and third at Wilderness 101. 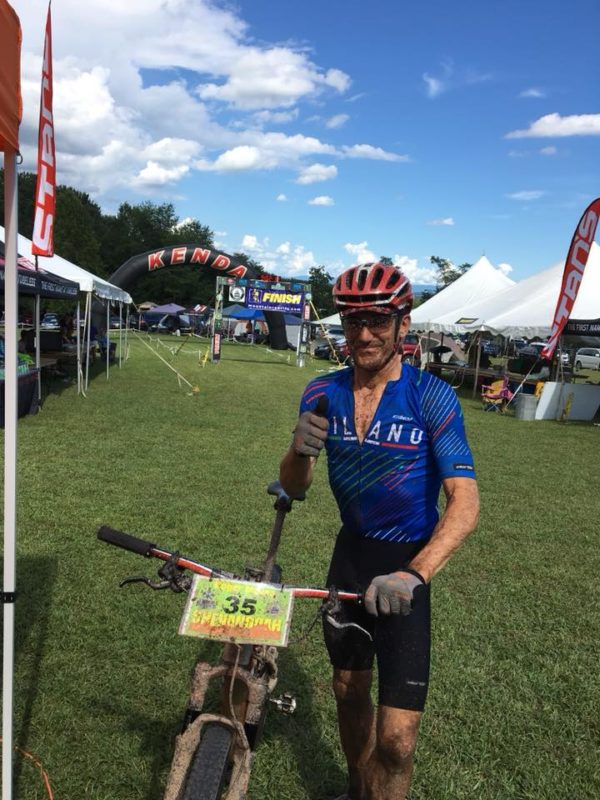 On September 22, the NUE Epic Series heads to the Upper Peninsula of Michigan for the Marji Gesick, one of the most difficult courses in the NUE Series.

From Michigan, The NUE Championship race at the Grizzly 100 in Big Bear, CA is slated for September 29, 2018. All four Division winners will receive complimentary entry into all NUE Series races in 2019, Custom Voler Champion Jersey Kits, plus a share of the $10,000 NUE Series cash purse.

As an added travel bonus, NUE division winners are invited to represent the NUE Series at The LaRuta de los Conquistadores, a three day stage race across Costa Rica November 1-3, 2018. There is still time to register for anyone that would like to join NUE Champions on this incredible journey from the Pacific to the Caribbean.

Stay tuned here for the latest news and information on the Marji Gesick and NUE Series Championship Race!