Schworm and Stickle Get the Axe at the Lumberjack 100

The 2015 Founders Brewing Lumberjack 100 welcomed 450 racers under brilliant sunshine on an unseasonably cold Michigan morning. The pre-race buzz was filled with chatter and excitement about the legend, Two Time US Olympian, Tinker Juarez and world class ultra-endurance mountain bike racer Sonya Looney who were both competing in this year’s race. Unfortunately, just two days before the race, Sonya crashed leaving her with a wrist injury that reluctantly forced her to pull the plug on racing.

The Lumberjack racecourse is located within the Manistee National forest which is just under a million acres of solid hardwood forest. The 33-mile loop is 90% singletrack with hard-packed, sandy soil and rolling hills that challenge racers with close to 3,000 feet of climbing per lap. 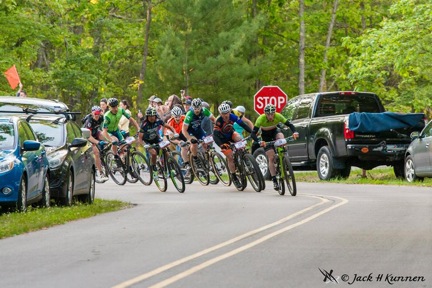 Even with the crisp morning temps it didn’t take long for things to heat up as Juarez (Ridebiker Alliance), Mike Simonson, and Brian Schworm (Green’s Toyota) kicked it up off the line with speeds pushing the upper 20’s for the mile and a half roll out to the trail.

The lead group pushed a pace of 16.5 mph for the first lap and came through the start finish with a selection of 14 racers clustered together at 2:12. Christian Tanguy attacked on the second lap and tore a hole in the lead group whittling the leaders down to six racers.

As they crossed the mat finishing lap two it was Tanguy, Juarez, Wakeley, Schworm, Vanias and Baker that were the sole survivors of the attack. Lap three saw more attacks on the hills leaving just Tanguy, Wakeley, Juarez and Schworm intact at the mid lap aid station. 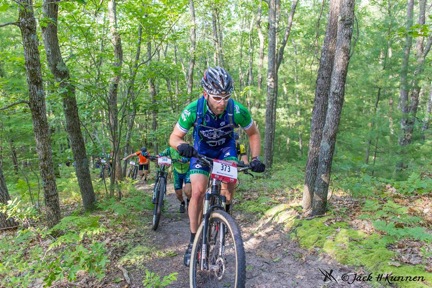 With less than ten miles to go it was Brian Schworm who attacked, dropping Juarez and Wakeley, and continued to apply the pressure until he shook off Tanguy and cruised across the finish line at 6:27:39 (1:13 ahead of second place).

The women’s open field saw Rhonda Stickle (Bike Zone Racing) decide to push the field apart on lap one and she came through the lap with a lead of over two minutes on second place Jill Martindale (Grand Rapids Bicycle Co.) and more than four minute lead on third place Mari Chandler (Dart Nuun/Tecnu Racing).

During lap two Chandler reeled in Stickle and they started the third lap only thirteen seconds apart and almost six minutes ahead of Martindale. It was Mari Chandler who caught Stickle early on lap three and rode her fastest lap finishing in 7:59:03 as the 2015 Women’s Open Winner. 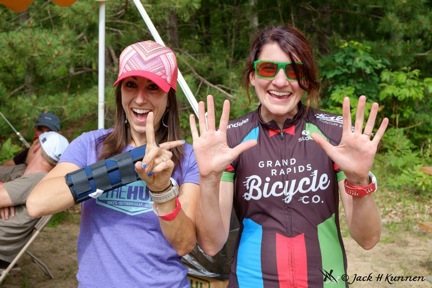 The men’s singlespeed class saw Gordon Wadsworth (Blue Ridge Cyclery/Pivot Cycles) pin it from the start and was in the overall men’s lead group through lap one with a time of 2:12:56. Second place Jan Roubal (Velorution) had a three and a half minute deficit and third place Aaron Fader came through the first lap almost ten minutes down on Wadsworth. In the end it was Wadsworth who had the legs and handily took the top spot with a time of 6:48:32

The women’s singlespeed category saw Emily Korsch (Team Noah Foundation) build up an almost half hour lead through one lap on second place Lisa Thompson (LCR) and in the end it was Korsch in first place 9:26:52 and Thompson at 10:04:59

The men’s master category saw Jeff Wittbrodt (Specialized) and NUE defending champion Roger Masse (Rare Disease Cycling) battling it out on lap one hitting the lap mat just ten seconds apart with over three minutes on third place Jeff Clayton (Georgia Neurosurgical Institute). They pulled away from the rest of the master’s group when they came through after one lap with times of 2:22:32 and 2:22:42 respectively. Masse passed Wittbrodt on the lap and never looked back as he finished with a time of 7:19:23 for the 2015 men’s masters title. 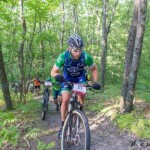 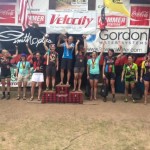 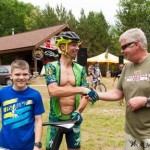 Brian Schworm is congratulated after the race. Photo by Jack Kunnen 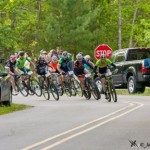 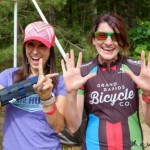