TRANS-SYLVANIA, PA (June 2, 2016) – Stage 4 of the NoTubes Trans-Sylvania Epic was a wet and wild ride at R.B. Winter State Park, a mainstay of the event with some new trails and more miles added for this edition. A steady rain through most of the day encouraged some riders and hindered others.

With its high speeds, smoother trails and wet weather, stage 4 turned into a more tactical battle for the top men. Kerry Werner (Rally Cycling) raced his way into the lead of the general classification by virtue of winning the stage and finishing as the top enduro rider on the day. Previous leader Justin Lindine (Apex / NBX / Trek) dropped to second overall after finishing second in the stage and third in the enduro. 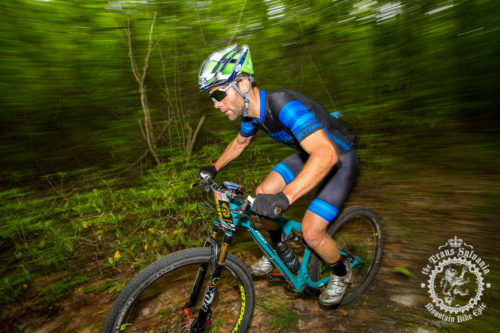 Justin Lindine (Apex / NBX / Trek) started stage 4 of the NoTubes Trans-Sylvania Epic as race leader, but ended it in second place on both the stage and in the GC after a challenging day. The men’s race proved to be extremely tactical with three of the favorites battling it out for most of the stage.

That left a highly motivated Zamora with Werner and Lindine. “I often was at the front so I could make up time on the other riders and get a top-three today,” said Zamora.

Werner was happy for the extra company up front. “Pau was being a trooper and taking good pulls with us. He wasn’t the best descender although he’d get in front for some of the enduro segments,” said Werner. “I think his motive was to slow us down so we wouldn’t get away from him.” 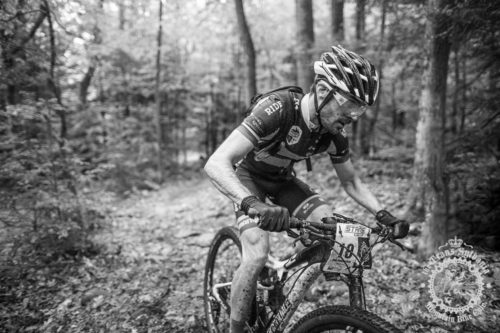 Cyclocross pro racer Dan Timmerman (Riverside Racing) is no slouch when it comes to mountain biking. He’s been mixing it up among the top five of the solo men at the NoTubes Trans-Sylvania Epic, and sits in fourth overall after stage 4.

Zamora’s strategy worked well until a steep climb just before the fourth of five enduro segments when Werner seized an opportunity. “I’d never seen the trail before, but I had scoped it out on Strava and saw that it was wicked steep for 0.1 miles,” said Werner. “Pau swung wide on the right turn into it, and I chopped him inside and took over the lead ahead of him and Justin. I made it three-quarters of the way up the slick rocks before having to run, but the others had to run the whole thing after Pau slipped out. I led into the enduro segment, got a bigger gap and then went full gas to the finish which felt much further away than it had looked on the course map.” 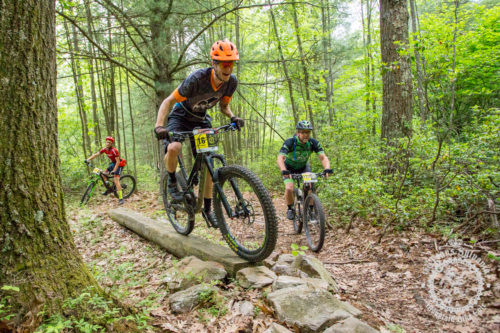 The enduro riders were clearly having at least as much fun, if not more, than everyone else all week. Here, Cory Rimmer (Kona / Nox Composites / Provision Sports Medicine) demonstrated the preferred enduro line. He and enduro classification leader Cody Phillips (Ibis Cycles Enduro Team) have ridden together for most of the week thus far.

“Kerry’s move was a good one,” said Lindine. “When we popped out on the road after the enduro segment, I could see him, and it became a pursuit match. I closed what was 35-40 seconds down to maybe 20 seconds at the finish.”

“Today was a hard day – a bit of a disaster for me from a GC standpoint,” said Lindine. “Unbeknownst to us, the enduro guys were having a terrible day, so their times on some of the enduro segments were slow. Neither Kerry nor I pushed it on the enduros today, but Kerry ended up first, and I was third in the day’s enduro classification, so due to the enduro time bonuses, I lost even more time to Kerry. Maybe I rode too conservatively today, but when you’re on the rivet, you don’t want to make a move and have someone counterattack it.” 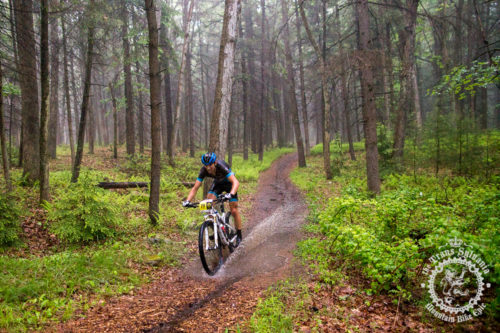 It was a stellar day for Kerry Werner (Rally Cycling), who moved into the lead of the solo men’s general classification in stage 4 of the NoTubes Trans-Sylvania Epic. He leveraged a strategic move going into the fourth of five enduro segments to grab a stage win.

With one minute separating Werner and Lindine, Friday’s final stage 5 will decide the race. Lindine knows well from his own past experience that one minute isn’t a big gap and anything could happen to change the race’s outcome.

Kaysee Armstrong (Liv) added climbing power to her descending prowess to earn her first stage win of the race. “This morning I wasn’t feeling super motivated, but then when we headed up the road climb, all the ladies were together, so I thought I’d dig a little deeper,” she said. “When I did, I felt really strong. So I thought, ‘Let’s just try to get to the first enduro as fast as possible.’ But then the rain started coming down, and I was like — oh, today’s my day. I loved every bit of it.” 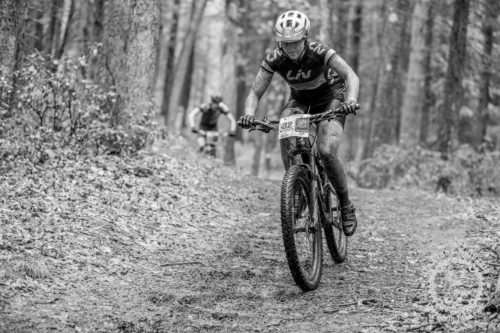 Armstrong is quite familiar with racing in the rain. “I race a lot in Pisgah where it rains a lot like that, so it worked out in my favor.” She now sits solidly in second place in the GC, as well as the enduro classification, and continues to take each stage one at a time.

Overall race leader Vicki Barclay (Stan’s NoTubes Elite Women) did not pull away from the pack as she has on other days, but she still held on to her lead and her good attitude. “I had some mechanical issues today…those slowed me down,” she said. “But it’s good for me to have days like this, because it challenges me to push through. I had to work to get back up into second place. It was rough. I’m actually feeling a little bit grumpy. But Kaysee rode an amazing race and even before I was having problems, she was crushing the climbs.” 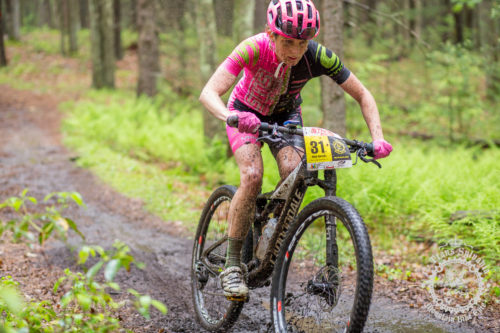 Vicki Barclay (Stan’s NoTubes Elite Women’s Team) had a challenging day despite weather that was more like that of her native Scotland; however, the pink-clad race leader successfully managed to defend her overall lead with one stage to go in the NoTubes Trans-Sylvania Epic.

Stage racing allows one to wipe the slate clean and start fresh each day. “Tomorrow’s another day… I’m just hoping to hold onto the GC win,” Barclay said.

Bryna Blanchard (Windham Mountain Outfitters) also had a strong day that resulted in third place. “I surprised myself that I could maintain that pace for that amount of time. I did everything I could and am satisfied with my ride. I was proud to be able to ride with Selene Yeager (Emmaus Bad Decisions Club).” Yeager is a past winner of the race who is riding on a team this year.

Blanchard had no illusions about the coming final effort. “Tomorrow’s going to be harder than today, a lot harder. I think I have to just not go to that dark place and try to stay focused on every section.”

Stage 4 of the NoTubes Trans-Sylvania Epic took racers to R.B. Winter State Park for some of the most picturesque riding in Pennsylvania. Among the highlights were Black Gap Trail and White Deer Creek Trail. The course’s 35.2 miles, with 4,616 feet of climbing, were fast and furious and included five enduro segments. A cold, spring-fed lake awaited at the finish – where riders could cool down and clean off the day’s mud.