After 5 stages, 4 nights of tent camping, 271 miles, about 100 stream crossings, and countless gallons of bottled water we had finally reached the final stage of Titan Tropic.

The final day of any stage race has always left me with mixed emotions; excitement to sleep in a bed again and give my butt a well deserved day off, but sadness that tomorrow I’ll wake up and not be racing my bike, instead I’ll be packing and returning to the real world. There really is nothing better than putting all your focus on racing your bike and recovering for the next day.

Sadly, all stage races must end and I was thankful that I woke up Friday morning feeling good. No stomachache. No vomiting every time I looked at food. I wasn’t shoveling in breakfast like normal but I got in some cereal and bread. Way better than yesterday. 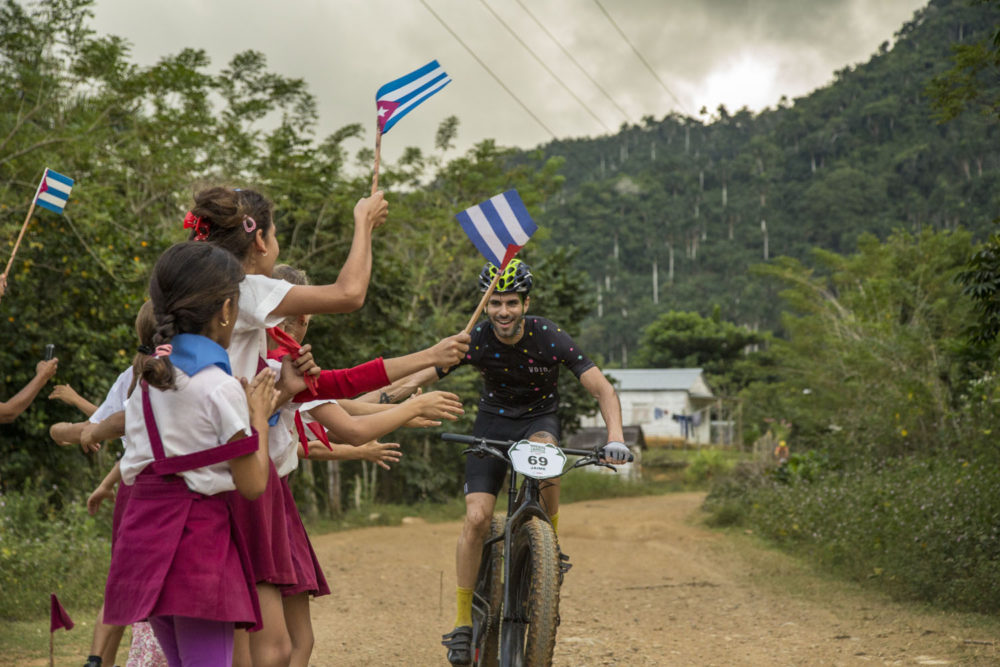 The final stage took us out of the Vinales Valley, out of the shadows of the mogotes, and up to the northern coast to finish on the pristine, white-sand beaches of Cayo Jutias.

Ourselves and the small contingent of U.S. riders in Titan Tropic were looking to cap off a successful week. We held the lead in the mixed duo category, despite losing time the previous day. Mountain bike super-legend Tinker Juarez (Cannondale) was wowing the field by leading the senior 50+ category but more impressively hanging on to fifth in the overall GC. Tinker was accompanied by second-placed senior rider and Cape Cod resident Kevin Hines (Corner Cycles) who sat in the top-10 on GC. While Selene Yeager (Bicycling) was solidly placed in 4th in the women’s competition. Everyone was looking forward to a good final day and that refreshing dive into the Atlantic following the finish.

Today’s roll out was fast, heading downhill on a paved road. Without warning the lead car sped off and riders ripped down to the first section of singletrack. The course bottlenecked quickly with riders battling for position. 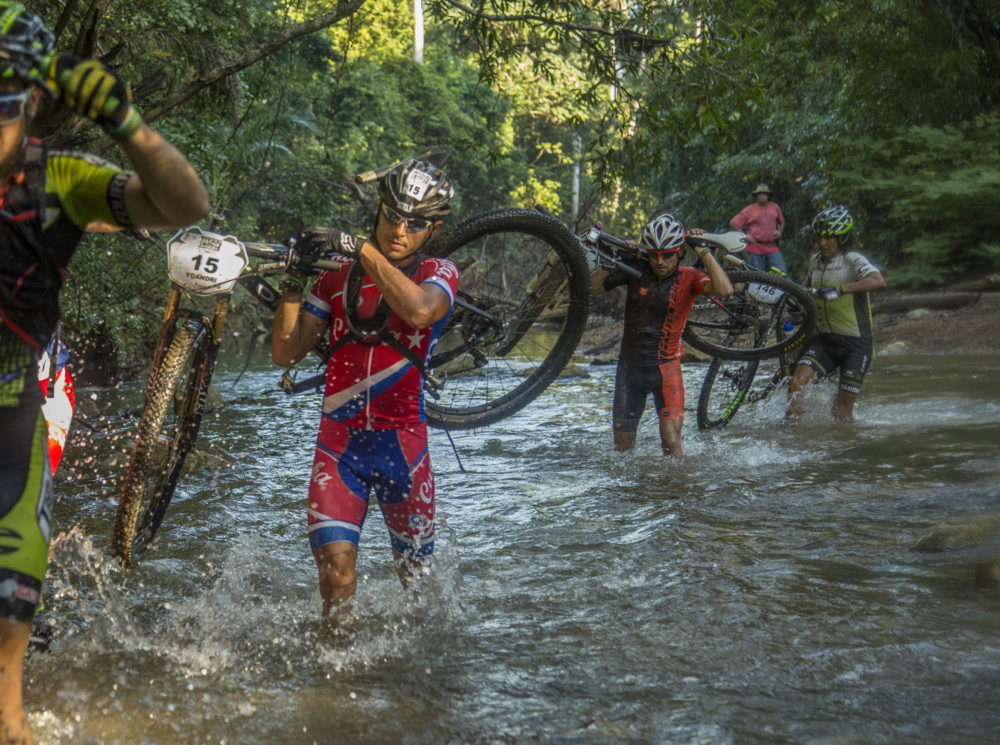 The lead group crosses a river on stage 5. Photo courtesy of Titan Tropic by GAES

After the first few climbs and trail sections we began to settle in and tackle the progressive rollers that stood between us and the coast.

The final stage was shaping up to be a good one. The first 60km was almost entirely dirt with steep, short climbs making the legs burn. The second-place mixed duo team had gotten in front of us on the opening downhill road start as Jen was spun out with only a 30-tooth ring up front. We climbed our way back into the lead with some fancy trail navigation in the early singletrack and then hooked onto a group of drafting partners when the singletrack turned to logging road.

We were going good now and cruised past the final mogotes saying goodbye to the high cliffs and hanging gardens making our way into palm forests as we approached the coast.

With 10km left we exited the last of the dirt and entered a long causeway that would take us to our final destination. The road was dead flat but the wind was mercifully light and cool as it came off the water on both sides of us.

Finally, we made the turn off the road and onto the untouched sand. I dropped into the surf a little too deep and was immediately gobbled up by a wave that came almost up to my handlebars – my bike is not going to be happy with me tomorrow. 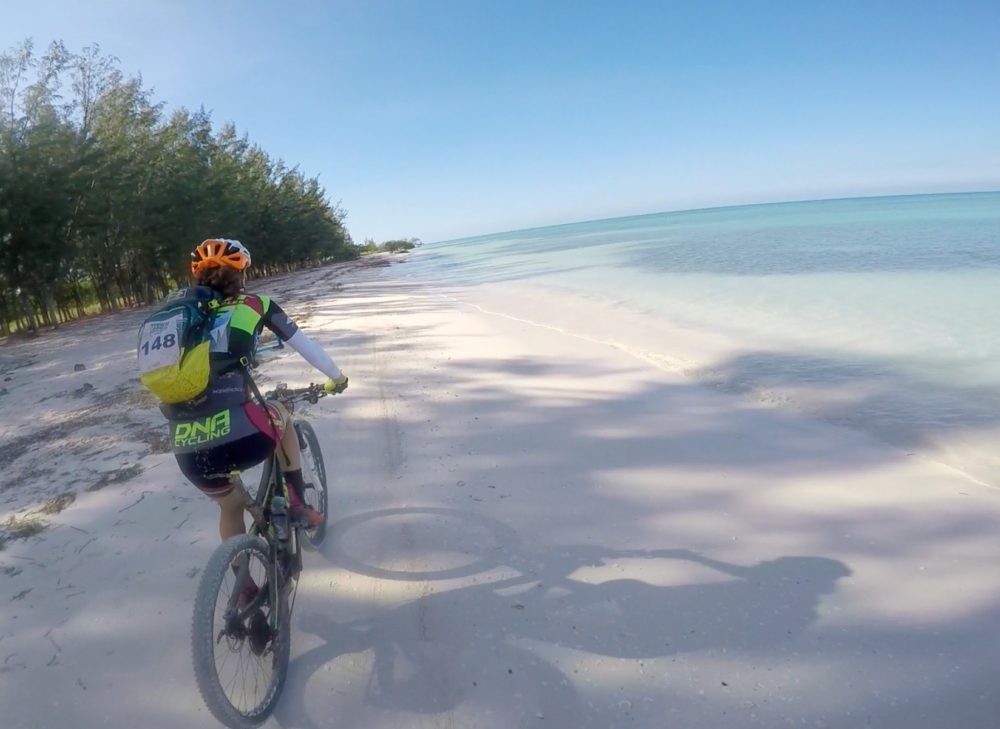 Jen Hanks on the beach at Cayo Jutias. Photo by: Shannon Boffeli

Higher on the shore now, we scrambled through the mangroves and palms dotting the sand and made the final turn toward the finish line arch.

It’s always a great feeling crossing the line after days and days of hard efforts, even more special we would get to enjoy taking the overall win, for the first time, in a multi-day stage race.

Just one last thing to do. We both dropped all our gear and raced into the clear turquoise water of the Atlantic.

It seemed like everyone had a great last day and a memorable week. The Titan Tropic was like nothing we had done before. The unparalleled cultural experience of Cuba fused with a week of bike racing and the excellent support of the Titan Tropic promoters combines to make a wicked stew of challenge, enjoyment, and unforgettable memories.

Once we complete a stage race Jen and I don’t typically do the same race again, always looking for a new experience and challenge, but Titan Tropic may change that for us. We are already looking forward to another week in Cuba, December 2017. 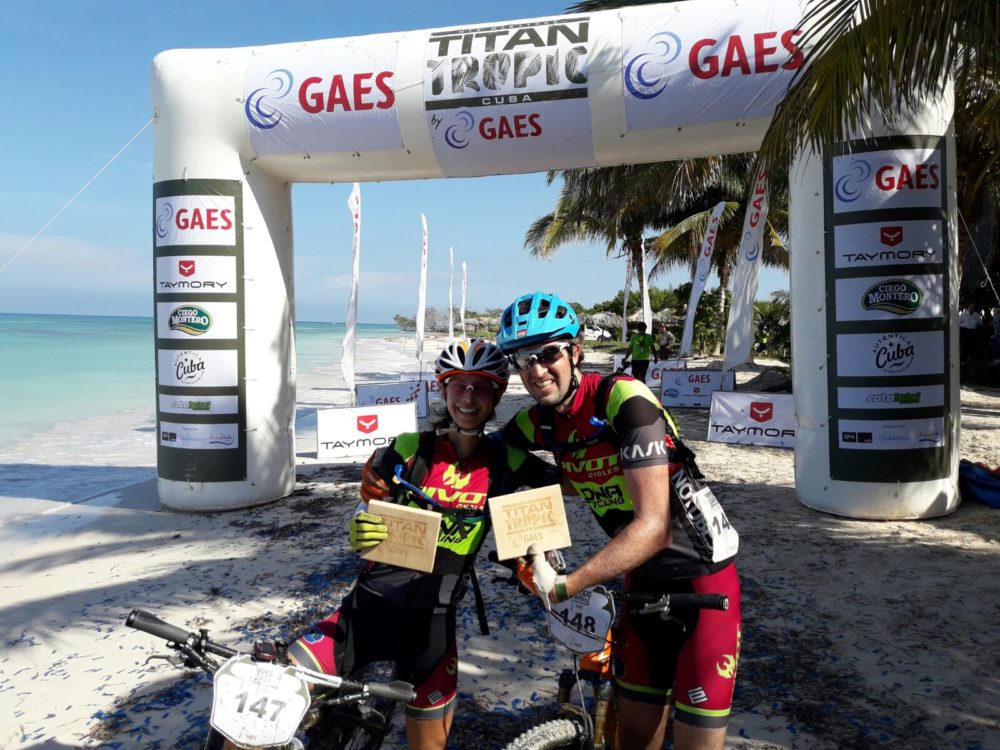 Us at the finish. Photo courtesy of Titan Tropic by GAES