Tatanka, the Lakota word for Buffalo, is the only point to point race in the NUE Series. At 6am, racers began gathering beneath the shadow of USA National Landmark Mount Rushmore. 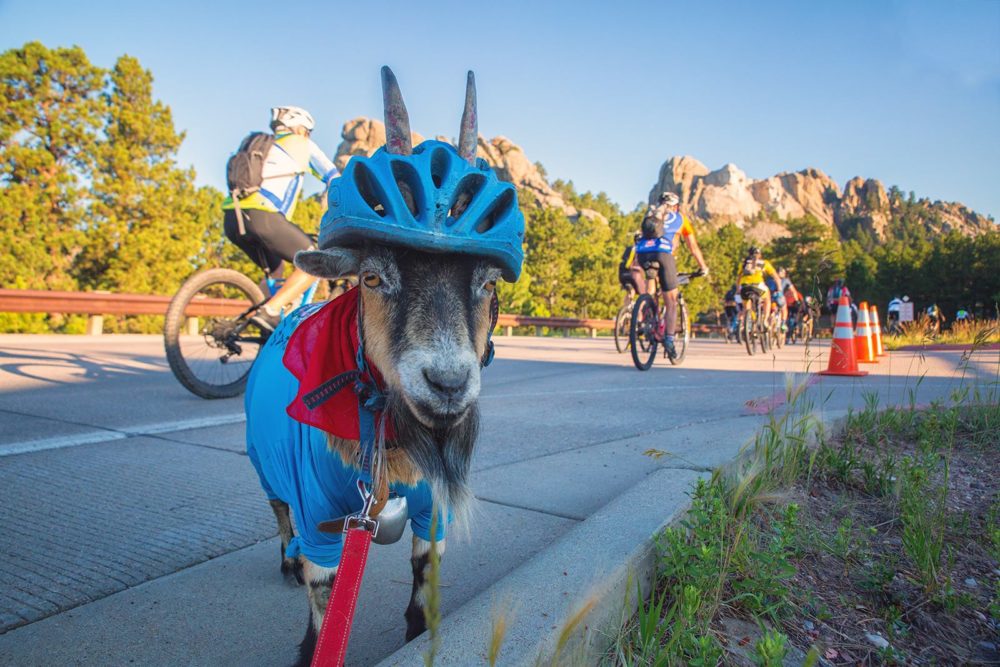 Gabby the Goat keeps watch over the riders at Tatanka. Photo by: Jonathan Karol

Beneath the magnificence of mammoth rock sculptures representing four of our nation’s greatest presidents, George Washington, Thomas Jefferson, Theodore Roosevelt, and Abraham Lincoln, NUE Marathon racer’s rolled out at High Noon, down a short section of pavement connecting them to the Centennial Trail along an 50k course that includes gnarly single track and fast, smooth cruising trail winding all the way to Sturgis. The town of Sturgis is nestled at the base of the northern Black Hills in extreme western South Dakota.

For a second straight year, temperatures reached an unseasonable high of 97 degrees, tempered by low humidity and, at times and in places, cool breezes throughout the day. Tatanka also included an 85 mile race that is stop #5 in the NUE Epic Race Series and a fifteen mile Sprint distance for first timers that included many kids. Racers must complete at least four NUE races to qualify for series awards that includes cash, prizes and a mid-season travel award, complimentary entry into the Volcano 100 in Costa Rica on September 2.

Quarq offered race fans live online tracking again this year and Strider Bikes, located in nearby Rapid City, set up a skills park, offering kids as young as 2-3 years old an opportunity to test their bike skills. In addition to food and beverage stands, racers were treated to local craft brews courtesy of Crow Peak Brewing and The Knuckle Brewpub of Sturgis. 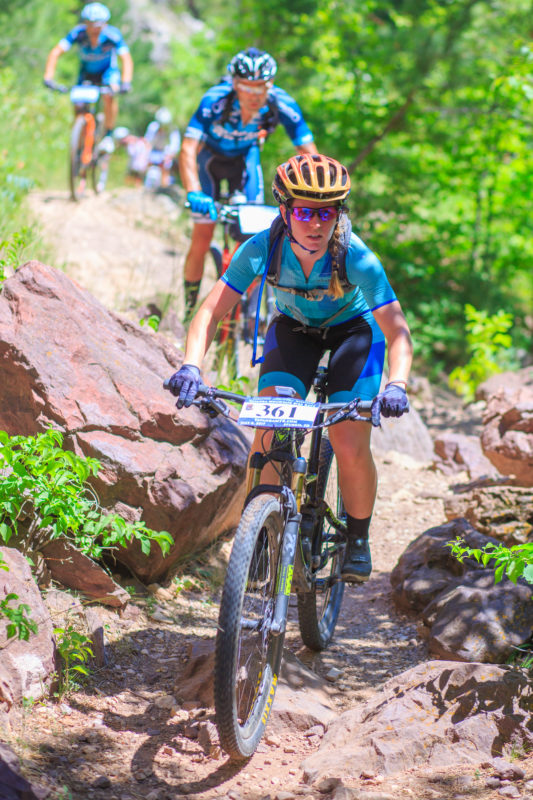 Toops crushes it to earn her first NUE race win!

OMBC Ohio Race Series Champion, Jen Toops, Paradise Garage Racing, claimed her first NUE win at Tatanka with a time of 3:56:58. With this win, Toops now leads the NUE Marathon Race Series at the mid-way point of the season and may compete at the Volcano 100.

“Going into Tatanka I didn’t know what to expect. The terrain was new and it was hot, real hot. The marathon race didn’t start until noon in hottest part of the day, around mid 90’s. The pace finally picked up on the gravel road. I stayed on the tail end of the lead group. No other girls followed and I tried to create a gap early. Going into the singletrack I had a nice lead.

Then, I followed a guy on the wrong trail. We quickly realized our error and turned back but I didn’t know how many girls had passed me. I thought I saw two. I quickly caught one and slowly pulled away on the fire road climb. I kept asking guys around me if there were any other girls’ ahead and got mixed answers.

I kept pushing the pace but never saw another female. I ran out of water about three miles before the aid station, pushing heat exhaustion, when aid station# 5 came to the rescue. They iced you down and even put some down the jersey for the climb ahead. A guy at the station assured me I was in the lead so I felt a little better about my position. The next half of the race was full of tough loose punchy climbs followed by some amazing downhills. I went over the bars into a patch of poison ivy on one downhill but luckily my bike and I were not injured.

Towards the end of the race, I had to stop and tighten my cleat as it almost fell off. I was excited going under highway 90 tunnel because this was the section I had pre-road and knew what was ahead. I kept pushing and, when I hit the bike path, there was no one around as I rode to the finish. The heat mixed with the terrain made for one of the hardest 35 mile races I’ve had in a while.” 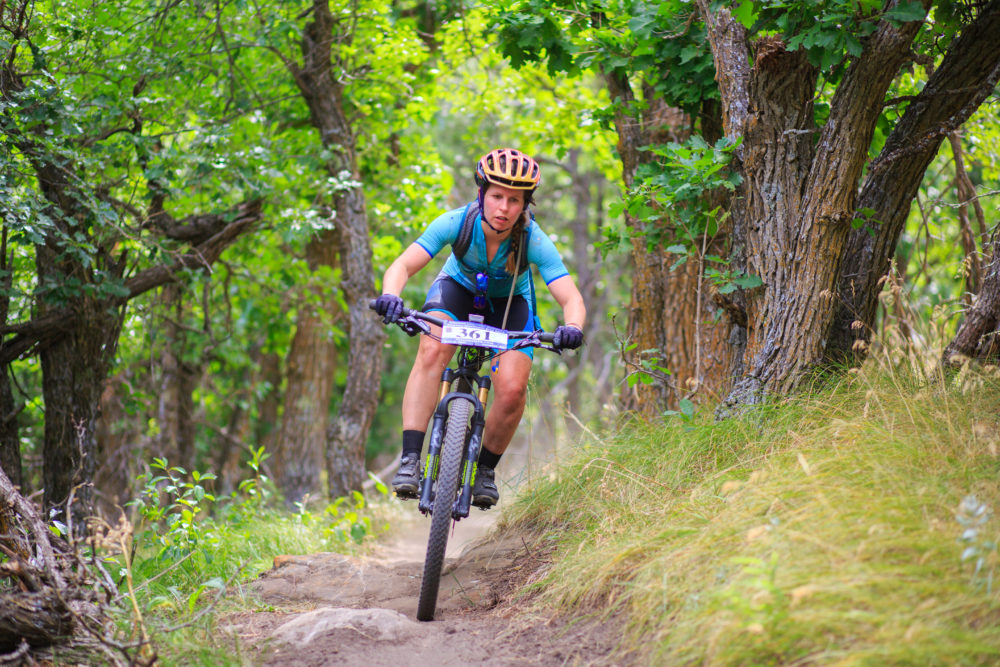 “I raced this event last year and it was a breakthrough race for me where I realized I could actually race over the course of four hours after coming from a traditional XCO and Cyclocross racing background. So I was excited to come back this year and push myself again and hopefully have it work out for a podium result!

Jen Toops and I went back and forth a bit in the first few miles as she had an error and went off course, but eventually she powered away from me. I knew I was coming in undertrained and couldn’t match her power and speed, so I focused on riding steady and smart to maintain my position, especially with the 90 degree temperatures which I’m not very accustomed to.

The course change that gave us a long, extended fire road climb after our first aid station let me settle in after the harder effort of the first five miles and find my legs. I wasn’t seeing any other women behind me, so I continued to just focus on the trail in front of me and keeping the rubber side down. Being familiar with the course helped, and the race really flew by to the last aid station, where volunteers were fast and efficient and I was back on my way.

I had a small mistake coming into the I-90 crossing where I turned off on a side trail because it was marked with tape, but quickly realized it wasn’t the correct way to pass under the interstate and turned around.  The last part of the course, which was different than last year’s course and continued on the Centennial Trail, really challenged me mentally, as I was not prepared for the climbing and powdery, sandy conditions all topped off with hot sun.

I rode the struggle bus to the bike path, where I perked up a lot and was so happy to cross in second place! It was my first “legit” marathon distance podium, and I am still so excited!  I love the course, and thankfully the heat did not affect me too much and my nutrition/hydration plan worked well. I even managed to beat my 2016 time on what I think is a harder course due to the addition of the Centennial Trail sections after the I-90 crossing. I look forward to possibly racing more NUE races in 2018, and of course returning to Tatanka for a third go.”

“The race was literally off to a rocky start when I found myself pushing my bike over small boulders on the way to Dalton Lake and the first aid station of the Tatanka Marathon. The friendly conversation with Jani Schumm helped distract me from the senseless heat. After the aid station, the Centennial Trail reroute put us on a gravel road climb. Pedal. Pedal. Pedal.

I couldn’t help but feel grateful for the 50 teeth on my Eagle cassette as I steadily climbed into the trees and shade! I gasped for breath when a frigid wet bandana was placed on my neck at the aid station at Elk Creek. God bless the volunteers! As quickly as I stopped for water and a banana, I found myself climbing once more. Keeping up with water and food seemed to be key for me. Just when I thought it was all downhill, I discovered a new challenge, sand! I found myself literally laughing out-loud as I maneuvered through the parabolic sand. The race isn’t over until it’s over! This was my first NUE event. I can’t wait for more to come!” 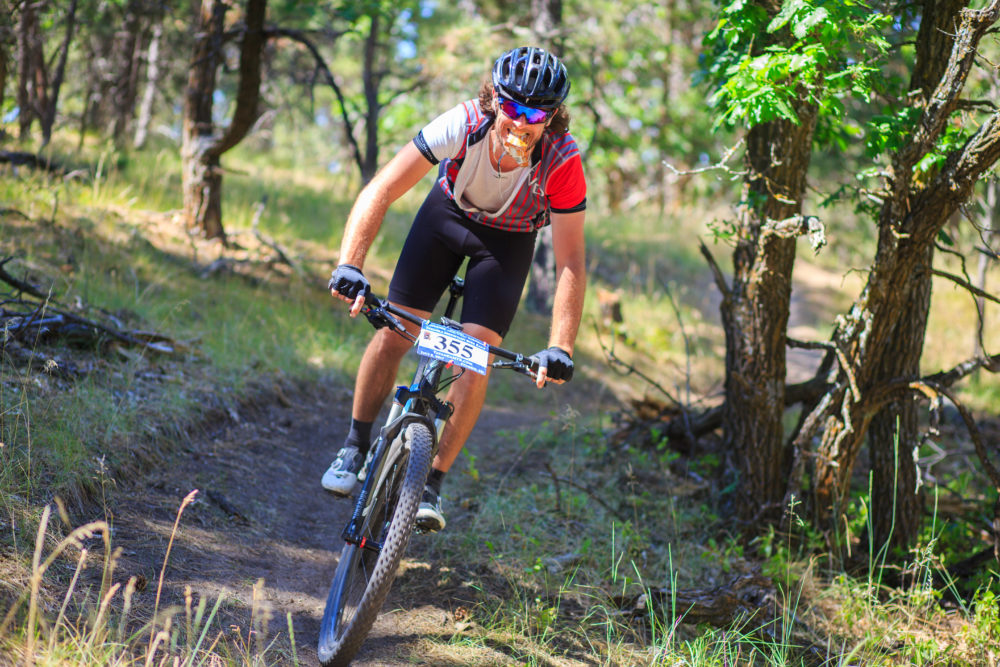 Thirteen minutes later, James Loverich, finished second place with a time of 3:32:03. “The race course was awesome as it always is. A few folks had bad luck with mechanicals so I magically ended up in second. Kudos to the organizers for all the hard work that went into this event.”

Winters Brews up a WIN

Tim Winters, Southern Brewing Company, braved the course as the only single speeder in the race. He shredded in at 3:46:16.

“My trip to the Tatanka was intended to be a mini-vacation of sorts. I traveled up with seven other folks – most of who were also racing – and spent a couple of days taking in the scenery and adjusting to the surroundings.

The day turned out to be sunny and warm, but not extremely hot. Living in the “Deep South” means lots of hot days plus humidity as a bonus, so the weather never became much of a concern for me. I have to admit that starting a race at Noon felt downright weird, almost awkward, since I was ready to go and sat around anxiously watching the clock for several hours.

The Marathon started out on several miles of flat pavement and dirt roads and with my 34×22 gearing I knew I would never hold on – I watched the lead group and numerous others steadily pull away from me. I kept reminding myself that it wouldn’t be that way forever and that the trail started upward before long. As it narrowed down, I found myself back in a small group of racers and, somewhere below the Dalton aid station; I caught up to two of my Rescue Racing pals from home.

Being ‘amongst friends’ definitely encouraged me to stay on the gas and also served as a great distraction when things got uncomfortable throughout the day. I ended up trading places with both of them for the remainder of the race.  Riding an unfamiliar trail brings challenges sometimes as well, but the Centennial proved to be an extremely satisfying experience – technical in spots, but not so much that the riding was unpleasant so I really enjoyed myself on the course. I was a little concerned about staying hydrated, and did end up racing the last thirty minutes with nothing to drink, but I have to give a huge THANK YOU to the folks manning the Elk Creek aid station – they took great care of me as I came through and having ice cold water available was a nice surprise.

See you at the Volcano in Costa Rica this September!”

Todd Schoenberner, making his NUE Series debut, Snagged a narrow first place with a time of 3:54:35.