The final stage of the NoTubes Trans-Sylvania Epic brought thrills and spills on a tough, rocky course made more difficult with a downpour in the middle of the day. Battles for the overall general classification (GC) wins didn’t go quite as planned.

Kerry Werner (Rally Cycling) soloed to win the final stage of the NoTubes Trans-Sylvania Epic on his way to claiming the overall victory. A much anticipated battle up the final climb between Werner and defending champion and eventual runner-up Justin Lindine (Apex / NBX / Trek) never materialized after Lindine flatted early in the day. 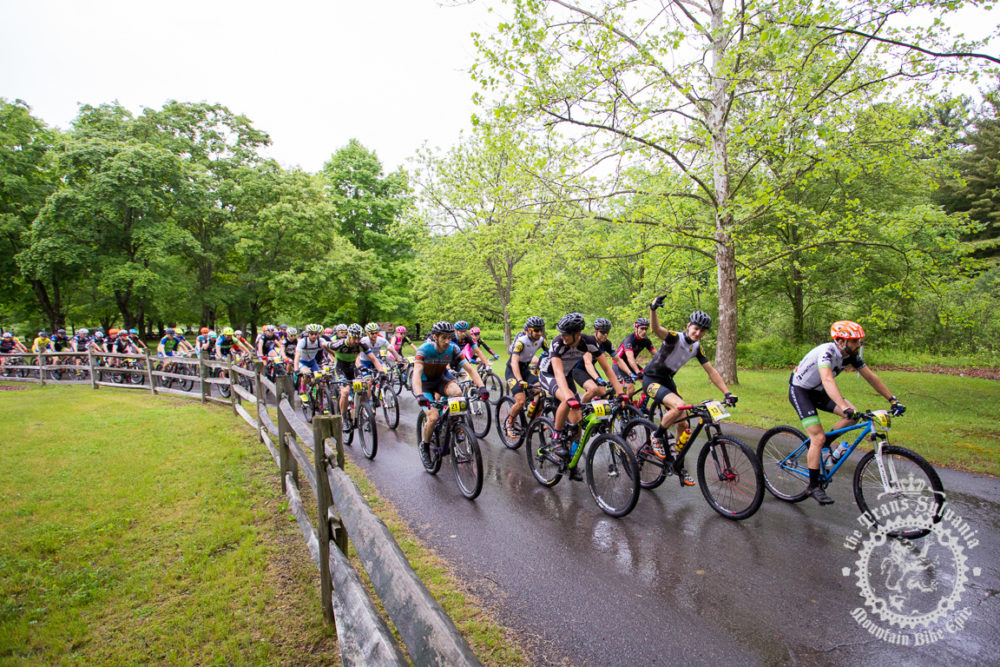 The peloton rolls out for the fifth and final time at the NoTubes Trans-Sylvania Epic. The rain held off for the start, but a 45-minute deluge drenched racers and trails mid-stage, making the rocks even more challenging than usual.

“It was unfortunate that Justin flatted. I’m not pumped to win that way, but at the same time that’s racing and I’ll take it,” said Werner. “This whole week has been great – it’s a super organized event with great volunteers. Growing up in another part of Pennsylvania, I always wanted to do this race, so it’s special to win. It’s my first time riding here, and I already want to come back and ride more of these trails.”

A motivated Lindine started the day within striking distance of Werner’s overall time and set a fast pace up the first climb, dropping everyone except his rival.

“I felt good today and was having fun on the trails,” said Lindine, “but I had some bad luck. I was keeping the pressure on Kerry and charged into the first enduro section, but flatted. When I went to install my spare tube, it had a hole… maybe from being under my seat for so long. I ran down the enduro segment trying to borrow a tube, but mostly everyone here in this race is on 29ers, and I’m on a 27.5”, so it took awhile to get one.” 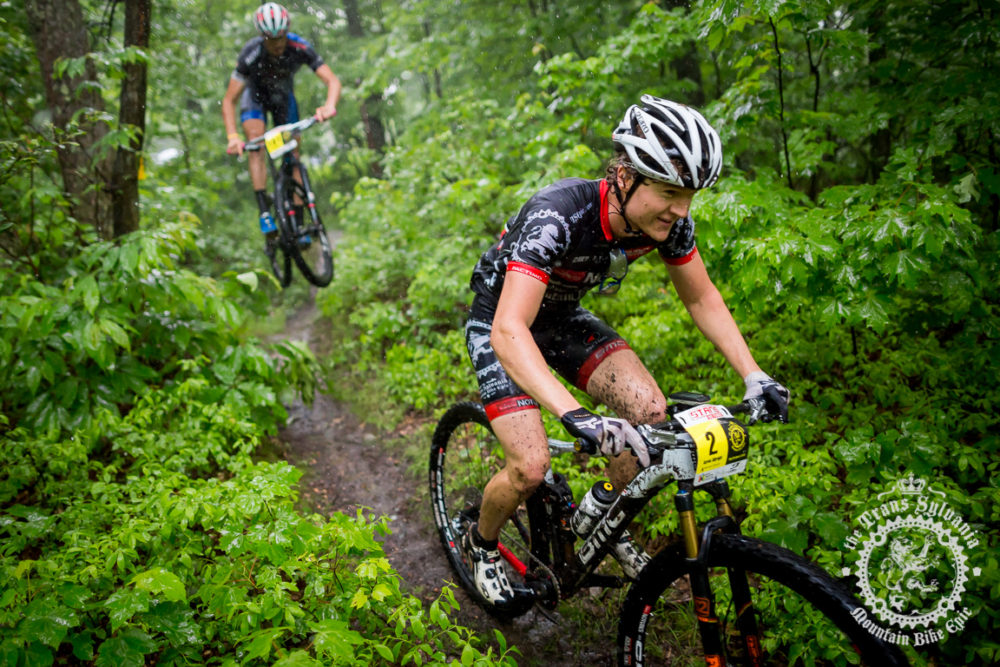 Racers started the day on trails with wet, slippery rocks, then just as they were starting to dry mid-stage, a thunderstorm dumped heavy rain for 45 minutes. The already damp trails became even slicker.

At the front alone, Werner alternated between struggling and finding his groove. On the final enduro section, he laid it over three times. “They weren’t serious crashes, but I put my bar into the bench cut side of the hill, and then those wooden bridges at the bottom were so sketchy. I came into the first bridge as straight as I could, not braking, and I still started to two-wheel drift, so I walked the second bridge. I didn’t want to take risks at that point.”

Pau Zamora (Buff Pro Cycling) chased on his own in second place until Dan Timmerman (Riverside Racing) caught him. In the midst of the cyclocross off-season, Timmerman rode himself into fine form during the course of the week and was feeling great by the final stage. However, Zamora was hungry to defend his third spot on the podium, and rode away from Timmerman on the final climb for second on the day and third overall.

Lindine chased his way back up into fourth place on the day, managing to save his second spot in the GC.

“I think some of those trails ride better when they’re wet,” said Lindine. “I made it a game to catch as many people as I could. I’d roll into the technical sections but would stay loose, so I’d just ride into wherever I was supposed to go. You have to be in the right zone, and I was enjoying today.”

Cody Phillips (Ibis Cycles Enduro Team) again proved himself to be the best enduro rider on the day and secured the overall enduro win. “I lost the enduro classification last year on the final stage, but this time I had two years of experience and came knowing what I needed to do. I also got lucky as this race will cause some issues for everyone – no matter what their experience.” 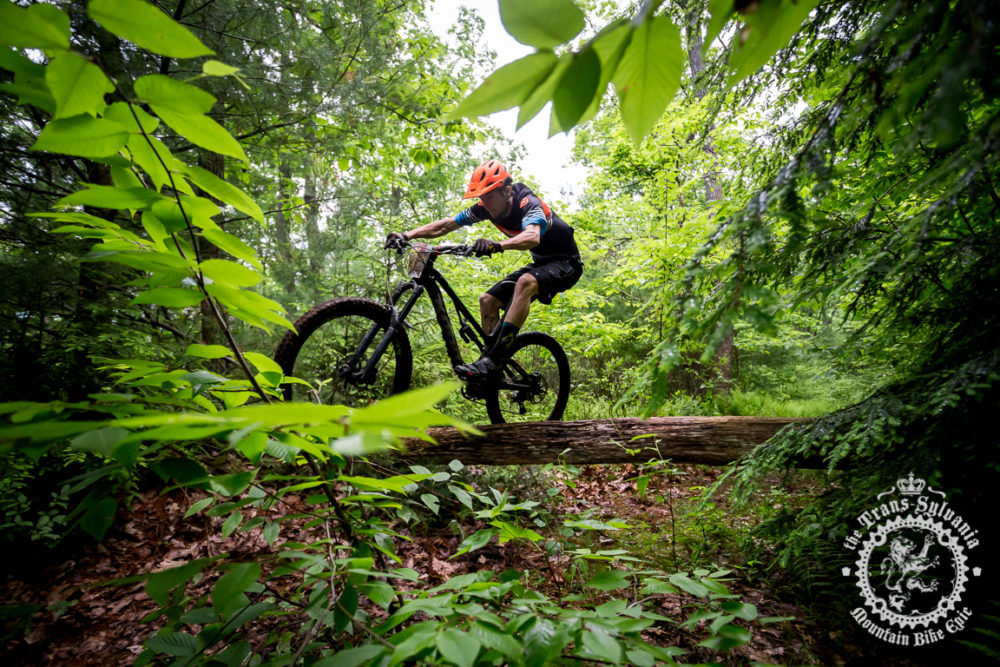 Phillips spent the day riding in short shorts and a cut-off T-shirt with an American flag after having successfully challenged his followers to raise a certain amount of money for the new Pennsylvania Interscholastic Cycling League. “I was part of a group raising money PA high school cycling, and I wasn’t doing very well,” said Phillips. “I’m a competitive person and was pissed that I was getting beat by the others, so I came up with some schemes to get people to donate more money. I raised at least $1,300. I’m not good at math on day 5 and haven’t added it all up yet, but it was cool to raise the money for the kids. I wouldn’t be where I am today without high school cycling.” 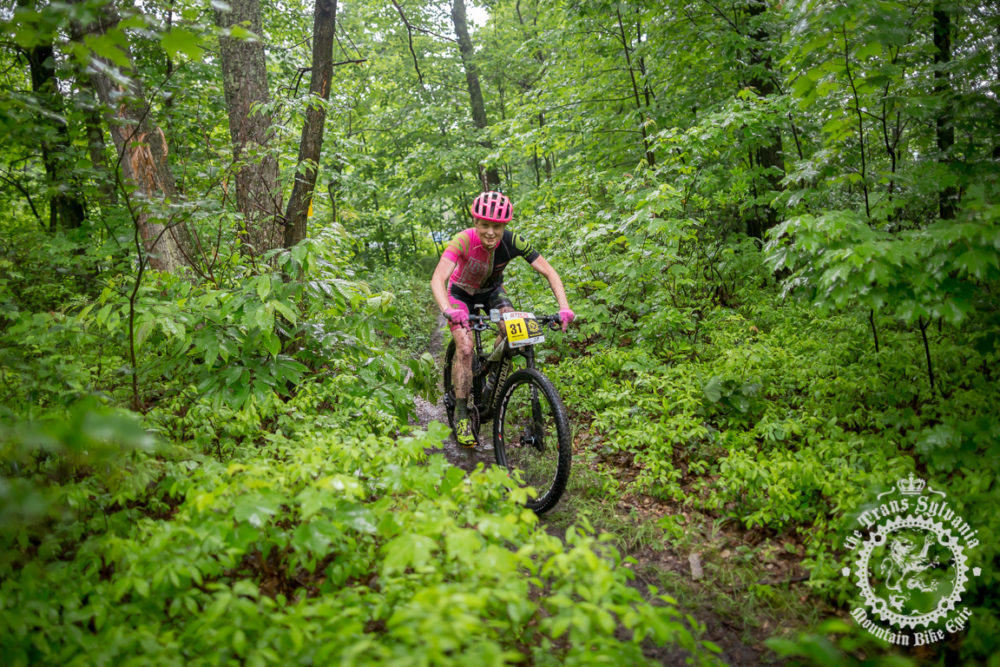 Race leader Vicki Barclay (Stan’s NoTubes Elite Women’s Team) was still smiling at this point in the final stage of the NoTubes Trans-Sylvania Epic; however, that would change later in the day. She broke her handlebar just after the second aid station and dropped out of the race.

The battle for the top podium spot came down to the last day, but not in the expected way. Last year’s winner and this year’s favorite, Vicki Barclay (Stan’s NoTubes Elite Women’s Team), suffered a devastating mechanical and had to drop out of the race.

Selene Yeager (Emmaus Bad Decisions), a past GC winner racing on a team this year, saw Barclay stranded in the rocks along the way. “Vicki jumped into a train of guys, and I thought, ‘There she goes.’ Then I went into a rocky section and she was just standing there. It was bad – her handlebar had snapped off in her hand. But at least she didn’t crash.”

That left Kaysee Armstrong (Liv), who was sitting in second place overall after yesterday’s stage 4, to take the win if she could. But this was not a foregone conclusion. “I felt tired,” said Armstrong. “Bryna [Blanchard, Windham Mountain Sports] was climbing so fast. I was feeling the fatigue through the rocks. But the enduros were fun, and I tried to be happy through them. Today was about surviving.” Armstrong managed to not only do that, but also to claim her second stage win of the week, the overall race title and second place in the enduro classification.

Blanchard, too, was feeling the cumulative effects of the week’s racing. “I did not feel good,” she said. “Yesterday was like a cross country race – it was so fast, and I didn’t recover. My heart rate was in the toilet, and I was tired. It was survival: keep moving, don’t stop pedaling. I wasn’t climbing nearly as well as I had been. I was happy I got through it.” Blanchard persevered to earn second on the day and in the general classification.

Yeager had an unexpectedly good day and was the first woman across the line. “I felt good on the climbs. I went into a little bit of a cave on all the chunky stuff, but I drew on all the stage races I’ve done, and kept thinking, ‘Just pedal your bike.’ It’s been a bittersweet week because I raced on a team, but I have such good fitness right now. I wish I had raced solo, but to know that you can perform well without all the pressure that you put on yourself is enlightening.” 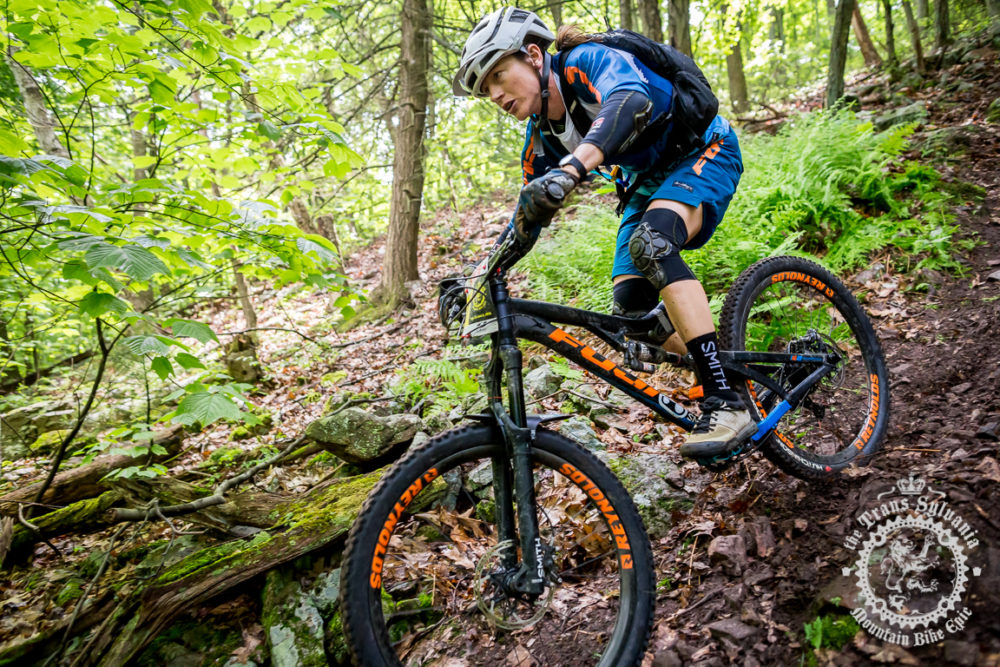 Meggie Bichard (Fuji Bikes) ripped down some of the scariest enduro sections yet to take the win and secure victory in the enduro classification. She had begun the week as a GC contender, but quickly changed tactics. “I gave stage racing a go on the first day, and I rode a hardtail, but I got completely beat up on it,” she said. “So I swapped over to the enduro bike and focused on enduro. I can’t go for the GC on that bike because it weighs a ton.”

Bichard typically races enduro, but enjoyed the different take on it and may come back for a crack at the GC next year. “I loved the course with so much singletrack – really techy, super rocky. We don’t often do such big days in enduro racing, but I like the long cross country loop, and I love a big day out. Maybe I’ll come back on a smaller travel bike and do a bit more focused training.”

Always a favorite among singletrack lovers, the Cooper’s Gap stage was plenty long at 34.5 miles and chock full of singletrack and climbing (5,466 feet). New for 2016, the stage started remotely from Greenwood Furnace State Park and finished back at the Boy Scout Camp that serves as race headquarters. The stage had four separate Julbo/EVOC enduro segments of tight, technical Pennsylvania singletrack. The route finished with the climb up Stillhouse Hollow, a notoriously steep ascent also featured in the Wilderness 101. 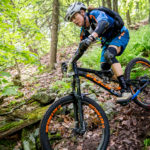 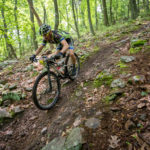 Dan Timmerman (Riverside Racing) had a great final stage of the NoTubes Trans-Sylvania Epic. The cyclocross pro enjoys doing this race as part of his off-season training – it helps him jump start his fitness as he heads toward the ‘cross season. 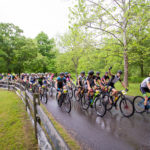 The peloton rolls out for the fifth and final time at the NoTubes Trans-Sylvania Epic. The rain held off for the start, but a 45-minute deluge drenched racers and trails mid-stage, making the rocks even more challenging than usual. 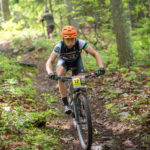 Jonathan Modig (The Adrenaline Project) breathes a sigh of relief after getting to the bottom of the first enduro during the final stage of the NoTubes Trans-Sylvania Epic. 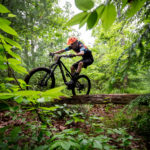 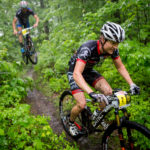 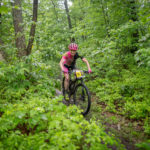 Race leader Vicki Barclay (Stan’s NoTubes Elite Women’s Team) was still smiling at this point in the final stage of the NoTubes Trans-Sylvania Epic; however, that would change later in the day. She broke her handlebar just after the second aid station and dropped out of the race. 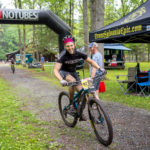