Both Riders Become First Leaders in the Overall Classification

Beautiful, dry weather set the stage for a lightning-fast opening day at the NoTubes Trans-Sylvania Epic in State College, Pennsylvania on Sunday. The 15-mile individual time trial prologue course wound around the picturesque base camp and included three special timed sections, two enduro segments and a small taste of the “East Coast Rocks” singletrack to come.

At the end of the day, Payson McElveen (Competitive Cyclist) and Crystal Anthony (Riverside Racing) were in yellow, after they took the elite men’s and women’s stage 1 victories.

Today’s elite men’s winner also happens to be the Under 25 leader Payson McElveen (Competitive Cyclist). He was quite pleased with his result, a super-fast 1:04:08.

“It was good. I didn’t actually expect to win today! Last year, this was my weakest stage,” said McElveen. “I thought I might lose a little bit of time, and I was prepared to not be worried about that, so it was a nice surprise to come out with the leader’s jersey.”

McElveen spoke a bit about strategy for the rest of the week. “I think we’ll let the races dictate what team tactics Justin [Lindine] and I will use. I’m not going to do any dirty attacks or passes on him, and I think the same goes for him. And if the opportunity presents itself, we’ll definitely work together. And our other teammate, Tristan Uhl, is sitting in fourth now, too. It’s just about settling in now.”

McElveen’s teammate Lindine was only 30 seconds back, despite suffering a flat. “It was good—I flatted going down the first enduro section, and it sealed with about seven pounds of air in the tire. It was OK on the road, but the last section with all of the twists and turns was pretty hard because it kept folding over.”

Lindine also flatted in last year’s time trial prologue but with much worse results, so he has reason to be optimistic. “It was a good day, though, I felt good—I’m excited, and relatively, that’s not a bad day here, compared to what’s happened here in the past for me. I’ve had some good races this season, and everything is pointing towards me doing well, so hopefully I can keep the bike going this week.”

Cyclo-cross pro Crystal Anthony (Riverside Racing) is off to a good start at her first NoTubes Trans-Sylvania Epic, with a blazing time of 1:16:20.

“It was a lot of anticipation building up to today. I just wanted to get out there and burn off some nervous energy,” said Anthony. “It was hot, and it was hard, with a lot of climbing… I usually like climbing, but I was suffering. I was really happy with how it went, though.”

Anthony is looking forward to tackling the technical sections coming up in tomorrow’s stage 2. “I had fun today—I liked the rocks! I’m on a full suspension and it’s awesome for this terrain. I think I’ll be happy by the time the week is over.”

The Stan’s NoTubes Elite Women’s Team was close behind, with Mical Dyck 1:24 back in second place and local favorite Vicki Barclay just 24 seconds behind Dyck.

This short-and-fast stage 1 time trial isn’t Barclay’s favorite, but she had a good showing regardless. “It was hard, as usual! I just got really thirsty towards the end, even though it was average temperature,” she said. “I’m not really a time trial person – with 30 seconds behind and 30 seconds in front of you. And because they started us alphabetically, I had to chase the cyclo-cross queen Crystal Anthony.I could see her for half the race, but then she was gone in the road sections.” 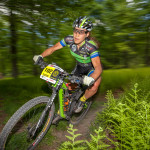 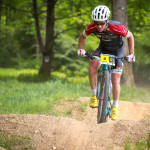 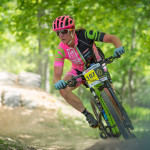 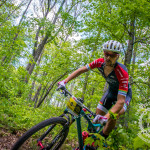 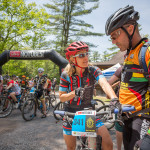