The NoTubes Trans-Sylvania Epic (TSEpic) is attracting a talented field of top riders from all over North America to compete during seven days of mountain bike racing from May 24 to May 30, 2015 near State College, Pennsylvania. They’ll be taking part in a race, which many riders affectionately call “Singletrack Summer Camp”.

As the overall race winner in 2013, Justin Lindine (Competitive Cyclist) of Ogden, Utah tops the list of favorites in the elite men’s race.

“The NoTubes Trans-Sylvania Epic is great for a lot of reasons, but the biggest is the communal atmosphere around camp,” said Lindine, who will be competing in the race for the fifth time “It will be another excellent week with friends while doing some awesome racing.”

Lindine is especially excited to be lining up for the start with several of his Competitive Cyclist teammates, including Payson McElveen and Tristan Uhl, and he knows from past experience just what it takes to win.

“Making it through the whole week with good luck, no mechanicals and staying healthy is key,” said Lindine, who has also won the True Grit 50-miler and the Wilmington Whiteface 100km. “It’s a hard week of racing, and the fatigue gets to you, so recovering as well as possible and keeping the bikes running are some of the most important things to do.”

Although he’s Lindine’s teammate, McElveen may prove to be one of Lindine’s toughest challengers. Last year’s NoTubes Trans-Sylvania Epic Under 25 winner would have finished third overall among the elite men if he had been scored in that category. The Durango, Colorado rider even beat all the elite men in one of the stages. 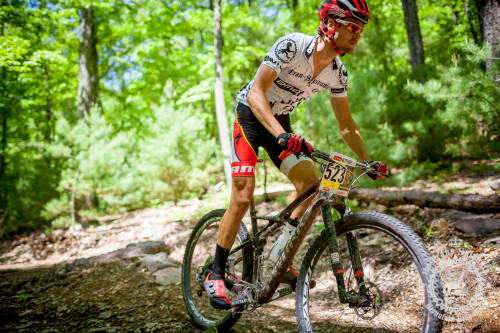 Payson McElveen will be challenging for the win at TSEpic 2015. Photo by: A.E. Landes Photography / aelandesphotography.com

“I’m looking forward to the fight! The NoTubes Trans-Sylvania Epic’s terrain suits me well, and I’m going to give it my all for seven days straight,” said McElveen. “For me, the most challenging part is digging deep through the fatigue that builds up day after day to perform mentally and physically when tired. By stage 7 last year, my body was very ready to be done, and my heart rate was barely climbing above endurance-zone riding.”

No one knows quite what to expect from another contender, Dan Timmerman (Riverside Racing) of Ithaca, New York. The NoTubes Trans-Sylvania Epic newbie is a cyclo-cross specialist, currently ranked fifth among the US elite men. He stepped onto 11 UCI podiums during the 2014-2015 cyclo-cross season and was fifth at the 2015 US Cyclo-Cross National Championships in January.

“I am now focusing on mountain bike events through the spring and summer, which marks a return to my roots in the 1990s during mountain biking’s heyday,” said Timmerman, who finished third in the 2014 Hampshire 100, a 100-mile mountain bike race and also won the 2013 Bearscat 50.

The cyclo-cross star is just one year past a surgery he underwent to address a common cycling injury to the left iliac artery, which had been causing him premature fatigue and “dead leg” syndrome.

“There is so much to look forward to at the NoTubes Trans-Sylvania Epic,” said Timmerman. “Foremost is probably the scenery and the experience I will have essentially living for a week in such an amazing area. Mix that in with how great the trails there are and such a high level of competition.”

Known for his superior descending skills, Bryan Fawley (Kodiak Tough) of Texas will return to the NoTubes Trans-Sylvania Epic after several years away. He plans to contest both the overall classification and the enduro classification, at least until a few days into the race, when he may decide to focus on one over the other, depending on how it’s going.

“I can’t wait to race on the variety of sections that make up the NoTubes Trans-Sylvania Epic,” said Fawley. “To me, it’s a rider who can adjust under all conditions that will prevail.”

Two other top contenders to watch are State College, Pennsylvania local Aaron Snyder (7 Mountains) and Collingwood, Ontario’s Peter Glassford (Trek Canada), who is the top returning finisher from 2014, when he was sixth overall.

“The NoTubes Trans-Sylvania Epic is special because it caters to so many different styles of participation,” said Glassford, who is the Canadian record holder at the Leadville 100 and two-time winner of the Crank the Shield three-day mountain bike stage race. “I describe it as seven mornings of fun and hard bike riding followed by afternoons hanging out at summer camp. The variety of stage types, terrains and durations help make the week great.”

The Canadian favorite expects the most challenging stage to be the second one, but hopes that bringing a full suspension this year will help him toward a more successful experience over Pennsylvania’s unrelenting, rocky singletrack. 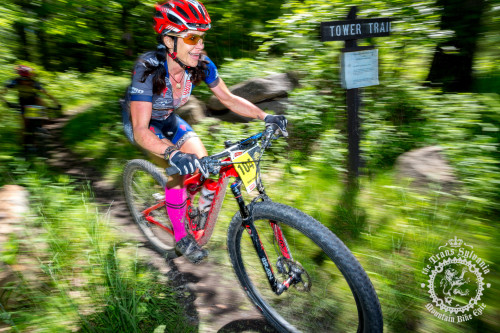 Selene Yeager is a veteran of the TSEpic. Photo by: A.E. Landes Photography / aelandesphotography.com

The NoTubes Trans-Sylvania Epic is again drawing a top notch field of women to race its seven-day mountain bike stage race from May 24 to May 30, 2015. Some of the fastest female endurance mountain bike racers will converge near State College, Pennsylvania for a race many affectionately call “Singletrack Summer Camp”.

“At the NoTubes Trans-Sylvania Epic, there’s a camaraderie between racers you just don’t see at most big events. It makes it really special,” said Yeager. “I just love the vibe at camp.”

Yeager admits that she’s not one for repeating races, but she keeps coming back to the NoTubes Trans-Sylvania Epic. “Gearing back up each day knowing what I’m in for can take some mental wrangling, but it’s always great once the gun goes off,” said Yeager, who was second at the 2011 edition of the race and third in 2014. She has won other major stage races in Brazil and Colorado. 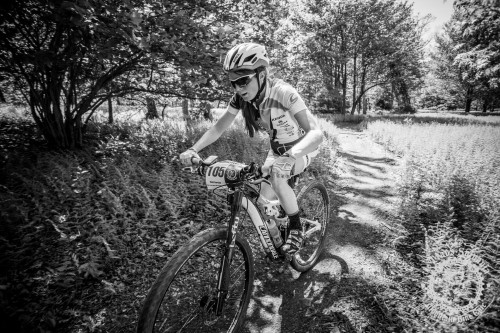 Vicki Barclay and her NoTubes teammates will be a dominant force at TSEpic 2015. Photo by: A.E. Landes Photography / aelandesphotography.com

As a local rider, Barclay brings detailed knowledge of each trail with her to the race. Although she has done the race several times, she has yet to win. Her best finish was second in 2014.

“From a personal perspective, I just love this race and all the ups and downs of feelings and emotions that the race brings out of you over the seven days. And being a hometown race makes it extra special,” said Barclay.

“Since I live in State College and ride here every day, I always love to see people’s first reaction to the riding here; they are often amazed by the rawness and interesting features of the trails in Pennsylvania. And in fact, keeping your bike and body working every day is always the biggest challenge.”

Haywood is another a returning NoTubes Trans-Sylvania Epic race veteran, having finished second in 2012 and 2013 and fourth in 2011.

“I’m looking forward to seven days of hard riding in a row. When in real life do you get to do that?” said Haywood, a former national champion. “I can’t wait to see if my teammate, Vicki Barclay, can finally win this thing. She is in fine form this year and knows every inch of the course.”

Haywood expects the toughest stages to be the opening time trial and the final day.

It’s hard to predict the performance of several other top contenders who are elite pro riders making their first trip to the NoTubes Trans-Sylvania Epic.

Cyclo-cross racer Crystal Anthony (Riverside Racing) of Beverly, Massachusetts is curious to see just how tough the terrain is.

“It’ll be my first time doing the race, so racing on unknown trails and on terrain that differs from what I’m used to riding will be the most challenging aspect of the course,” said Anthony, who finished fifth at US Cyclo-Cross Nationals earlier this year. “I competed in the TransAlp mountain bike stage race a couple summers ago, so I am familiar with a stage race format and the demands of racing day after day.”

“I’ve heard only great things about both the course and the experience of doing the NoTubes Trans-Sylvania Epic, so I’m looking forward to both! It’s a real treat to be able to compete in a challenging stage race within driving distance from where I live.”

“I think the biggest challenge will be riding and racing alone. I’ll be there without a team, partner or other racers that I know,” said Chinburg, who has competed in two other stage races in Italy and Poland.

“I’m looking forward to the day that’s all about enduro,” said Chinburg. “While I’m not a gravity racer, I enjoy the format and think it could be a fun addition to the daily stages.”

Both Emily Shields (Stan’s NoTubes Elite Women’s Team) and Ellen Noble (Competitive Cyclist) will not only be competing for the win in the under 25 classification, but they will also be mixing it up with the older, elite women.

Last year, Shields of Winston Salem, North Carolina, finished sixth overall among the elite women and was the top under 25 rider.

“I know ahead of time how tiring and challenging the week will be, yet I will also be better prepared after learning from last year’s mistakes,” said Shields who is the current Division 1 US Collegiate Cyclo-cross National Champion. “It’ll be great to race with my new teammates, and the race is close enough to home that both of my parents can come support me.”

Noble, who hails from Kennebunkport, Maine, was the third fastest Under 25 woman in 2014.

“I can’t wait to ride some of the most fun trails ever for the second year in a row!” said Noble. “The NoTubes Trans-Sylvania Epic is such a good race because it draws a stacked field; there are so many talented young racers; and it’s crazy fun. I love this race, and it’s transformed the way I ride.” 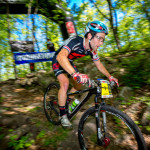 2014 winner Justin Lindine will be riding for the Competitive Cyclist team in 2015. Photo by: A.E. Landes Photography / aelandesphotography.com 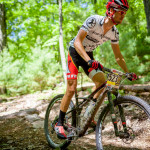 Payson McElveen will be challenging for the win at TSEpic 2015. Photo by: A.E. Landes Photography / aelandesphotography.com 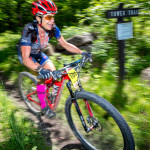 Selene Yeager is a veteran of the TSEpic. Photo by: A.E. Landes Photography / aelandesphotography.com 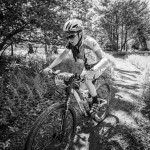 Vicki Barclay and her NoTubes teammates will be a dominant force at TSEpic 2015. Photo by: A.E. Landes Photography / aelandesphotography.com