Cole Oberman may be a relative new comer to the American mountain biking scene, but just two years in the Rare Disease Cycling racer has already made a big impact. Tenth at last year’s National Championships, and podiums in the Short Track at the early season US Cup races in Fontana and Bonelli have confirmed that Oberman will be one to watch in the coming years.

Oberman was kind enough to take some time this spring to check in with MTBRacenews.com about how he got into racing, his breakout year last season, and his goals for this summer.

For those folks who live outside the mid-Atlantic and are maybe just getting to know you, can you tell us a little about yourself and how you got into mountain biking?

Oh I’m just your typical snotty teenaged punk turned professional bike racer, ha ha. I grew up riding and racing mountain bikes in Central Pennsylvania and base myself out of Philadelphia now. My father is a cyclist so Ive been riding bikes in some form for literally my entire life. I’ve been racing professional for four years now and am trying my best to carry the torch for Easy Coast mountain biking. We’ve got the best riding and scene but surprisingly few pros so I’m just trying to show the rest of the country whats up!

Congratulations on your short track podium at the PRO XCT in Fontana. Was your plan to come into those early season races in California on top form?

Thanks! Yeah, it was incredible to come out and land on the short track podium two weeks in a row (2nd at Bonelli, 5th at Fontana). That was a real eye opener for me because if it had happened once, it could have been lucky timing. Twice means I made it happen and that was a huge confidence booster.

The plan was to come into the season absolutely flying and I feel like I managed to pull that off. I took a light cross season and really started training again before the fall was over. I did a huge amount of work this winter with the intention of coming into the spring US Cup races on top form. I’ve still got some tweaks to make on my fitness but my XC results are getting better every race and so I’m  optimistic that I’ll be able to reach the podium with some consistency later this season. All you can do is ask to see progression and I’m getting that, so I’m stoked! 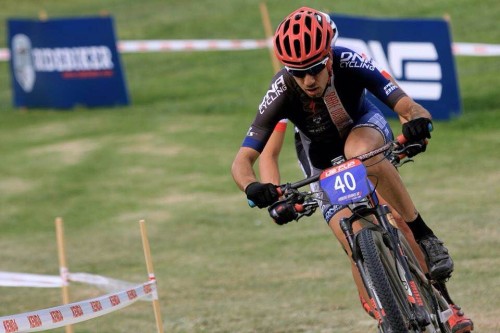 My big goals for after the spring US Cup races are to have consistent World Cup results, stand on the podium at XC and STXC nationals and compete at MTB World Championships in the fall. Obviously this is all easier said than done but I’ve got great support from my team and coaches and am confident I can get there. I started working with Jeremiah Bishop and Mike Shultz at the end of last season. We figured out some of my major limiters and made some serious progress over the winter. It was awesome to come out this spring and immediately land on the podium. I guess that says a lot on its own.

Anyone who follows NUE racing and the endurance scene knows about Rare Disease Cycling, but in the past the team has had less of a presence on the XC circuit. Is that something the team is looking to change?

Without a doubt. The team has consistently had great results on the endurance side of things, we’ve won everything from the NUE Series overall (x8) to The Transylvania Epic to The Brasil Ride stage race. RDC certainly isn’t going away from endurance racing but with the re-emergence of a high profile XC series in the US the vision is definitely to have more of a 50/50 focus on endurance vs. XC. The purpose of the team at its base is to raise awareness and ultimately direct research money for rare genetic diseases (often called the Orphan Diseases). From an exposure point of view, it just makes sense for the team to be at the US Cup.

It seems like your 10th place finish at Cross Country Nationals last summer was a breakthrough ride for you. Do you see it that way? What were your goals heading into that race?

Yeah, totally. I think even more so than my win at Transylvania, my finish at Nationals was a moment where I thought to myself that my performance was beginning to meet my expectations and potential. Top-10 was the goal heading into that race and I was super happy to meet that. Bear Creek is pretty local to me and all the fans and friends (they’re hooligans really) out there just made it so easy to pin it the whole race. That day is certainly one of my most memorable on the bike.

When did you decide, ok, I want to make it as a pro mountain biker? Is it something you’ve always wanted to do? Or did it just click one day?

My path to becoming a professional has followed a different pattern than most of my peers. I grew up riding mountain bikes and racing single speed for fun but was never involved in a development program or anything structured. I always admired the pros but it wasn’t until I was 18-19 that I decided it was something I wanted to pursue for myself. I raced amateur for two years before turning professional. It became obvious pretty quickly that I was lucky enough to have the genetic aptitude to be able to pursue being an elite racer with some seriousness.

So in a lot of ways I’m a little late to the party and have a lot to prove. At the same time, looking back, I wouldn’t have done it any differently. I race my bicycle because I love it and I’ve never felt any outside pressure to make it happen. I have the best friends, family, supporters and sponsors which makes it easy to keep pressing onward, even when it feels like I’m fighting an uphill battle.

What’s your favorite part of bike racing? What motivates you to keep at it and put in the work in training day in and day out?

I grew up in a blue collar family and so hard work is in my blood. The mantra: “If you’re going to do something, do it right” has been permanently burned into my brain and I apply that to training. My job might be non-traditional and fun but I don’t half ass it, ever. When it’s go time, it’s full gas.

Beyond that, I ride my bike to stay sane and would do so daily whether I was racing or not. I snap out a bit when I don’t have a positive physical outlet. Cycling is an intimate part of who I am, and so the training and motivation comes pretty easy.

My favorite part of racing is actually probably less the racing and more the people you meet and the experiences you share with those people. One of my best memories of last season was from after the Missoula ProXCT. There was a whole crew of us riding back from the venue, post race. We just happened to stumble on some awesome single track. So we were full of endorphins from the race, there’s a badass sunset, and were just shredding hero dirt back down into town. Total, childish, shit-eating grin the whole way home. It was pure bliss and something I never would have experienced if the race hadn’t brought me there. For me, those smaller shared experiences are as meaningful as the racing itself.

Piecing together a race season is always a challenge – especially when you’re trying to compete nationally. What are some tricks you’ve learned over the years to make it happen?

I think for me the struggle has always been more on staying mentally focused. I just try to be patient and positive. Everyone struggles at different points in the season but good form always comes back around. When your form is bad you work hard to fix it, when it’s good you lay it all out on the course and smash! Either way I get to ride my bike everyday, travel a ton, and meet so many great people. It’s hard not to stay stoked on that! 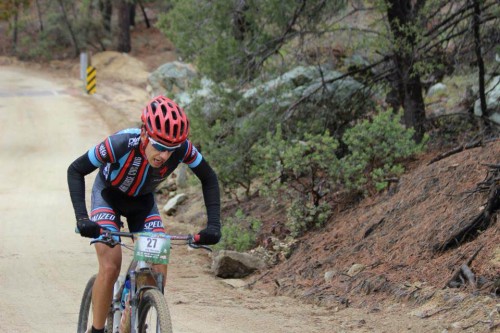 We’ve seen you light it up at some big endurance races races recently too, like last year’s Transylvannia Epic. Is that something you’re looking to continue doing, or all you all in on the XC side of things?

For this year I am all in on the XC side of things and my fitness reflects that. Right now if my race effort goes much over 2.5 hours, I’m basically useless, ha ha. However, I really love stage races and marathons and my fitness is adaptable to it when I focus on endurance. We’ll see how next season’s schedule shapes up, I would love to include more races like Transylvania or the Epic Rides Series (Whiskey Off-Road / Grand Junction) if it makes sense.

What are your favorite things to do when you’re not riding your bike?

DIY/Punk music is my second passion and so I try to make it to a few shows and go record hunting when there’s time. Otherwise I live a pretty simple life; relax at the cafe, make food with friends and just enjoy the city. I spend half the year on the road and so when I’m home, I try my best to take it slow and catch up with friends/family.