On June 17, The NUE Marathon Race Series headed west from the Mohican MTB100k in Ohio to the high mountains of Colorado in what was described by racers as a well-connected grouping of singletrack along the world class Buffalo Creek Trail system.

Bailey HUNDito and the 100 mile HUNDO were both founded as a fundraiser. The HUNDO Mission: To support youth cycling initiatives, develop and improve access to recreational trail assets in Colorado, and develop the Bailey, Colorado Area into a cycling destination. This year, a father and son would take the podium in their respective divisions. 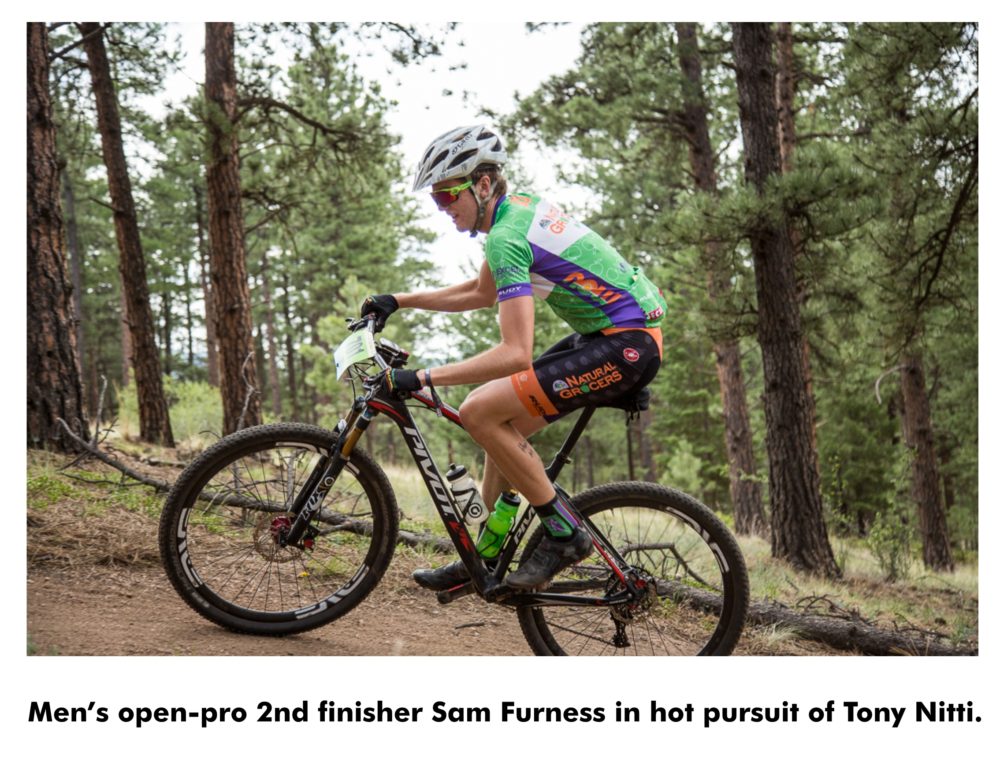 The Bailey HUNDO supports two youth biking initiatives in Colorado: Trips For Kids Denver/Boulder, which offers mountain biking opportunities to underserved youth and changes lives “two wheels at a time”! Colorado High School Cycling League, a new resource for high school students around the state to be exposed to the world of mountain bike racing–and developing the racers of tomorrow who will ride YOUR legs off!

Bailey also continues supporting the advocacy and trail building work of the Colorado Mountain Biking Association as they work to plan and build new trails in the Platte Canyon area that both serve the local community’s recreation needs and develop Bailey into a mountain biking destination.  Their long term beneficiary is the Bailey Trails development project. 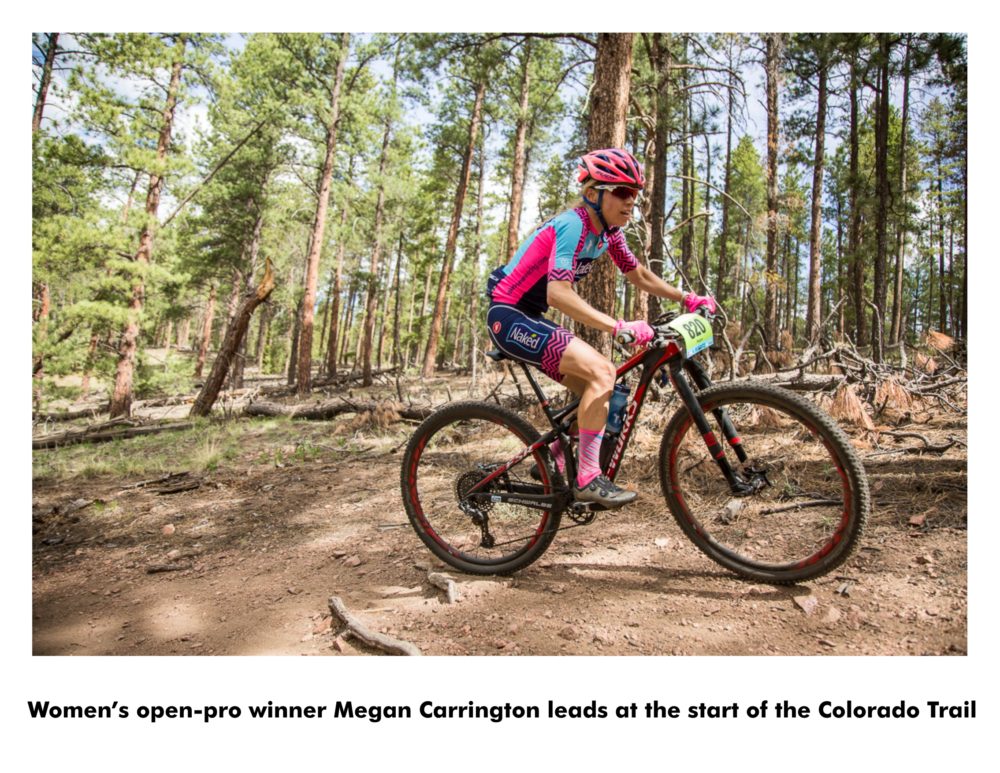 Carrington claims the top of the podium

In a HUGE women’s field that included 61 registered women, Megan Carrington returned after a one year hiatus from the NUE series, representing a new team, Naked Women’s Racing, claiming first place with a time of 4:14:51.

“I went into the day feeling a little uncertain about my decision to race fifty miles two days after returning from a week long beach vacation in Florida, what was meant to be a surf trip that turned into a booze trip due to a lack of waves.

The 9:30am start was intimidating considering the typically hot temperatures this time of year, but we lucked out with some cloud cover and comfortable temperatures. The aid stations were plentiful and provided more than enough support with hand offs and options but honestly, the most impressive part of the race was the significant distances of world class singletrack linked up with little to zero road in between to create a 50 mile and 100 mile race that ended around the same time…that was incredible. 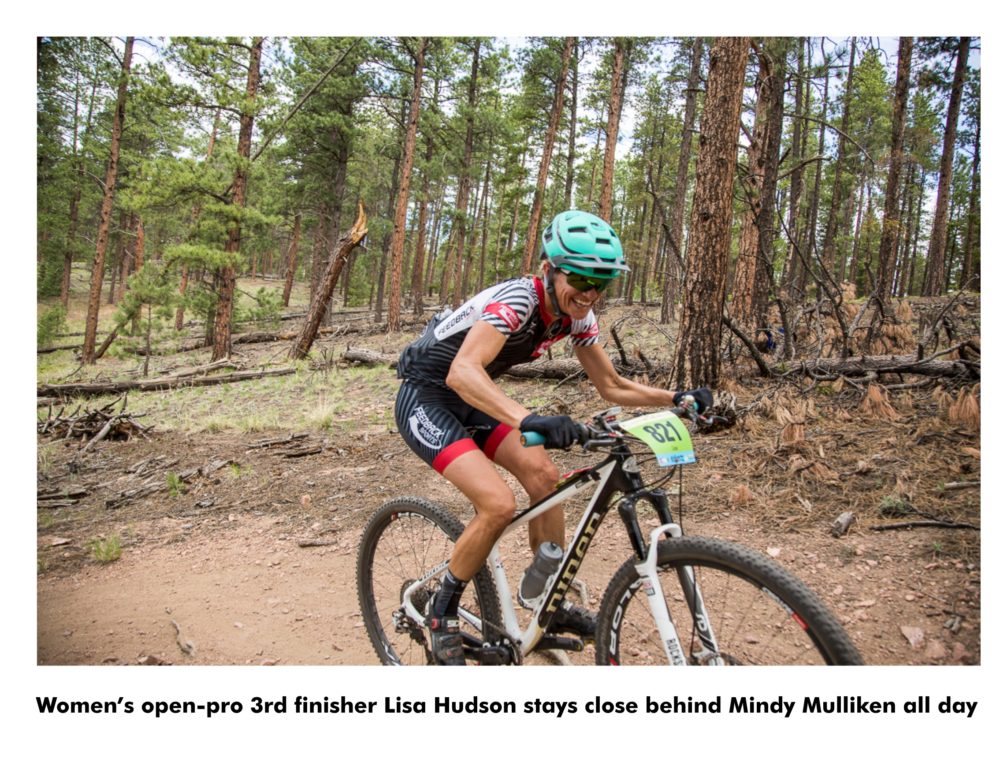 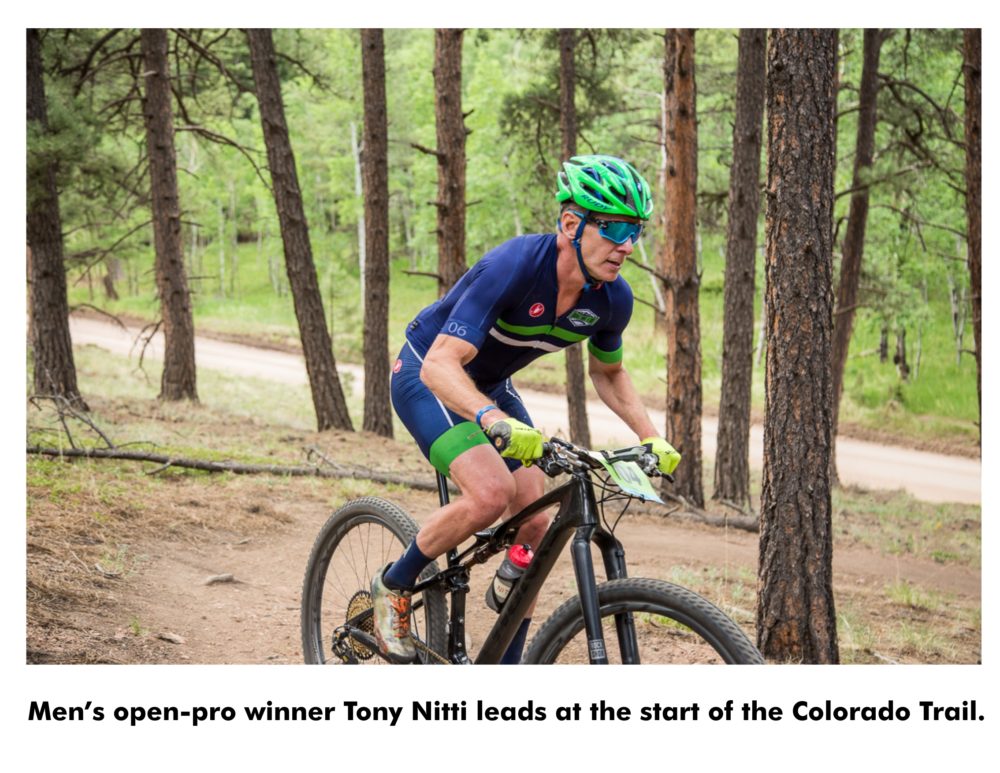 Nitti gets the Win

After placing third in last year’s Hundito, Tony Nitti, Basalt Bike & Ski, took the top spot this year with a time of 3:40:25.

“On the opening road climb, Mark Currie and I separated from the field and hit the private property double track first. I’m well aware of how strong Mark is on the climbs and how much time he would be putting into me on the descents all day, so I was determined not to let him go.

As we descended to the bridge, Sam Furness suddenly ripped past us and crossed the bridge first, letting Mark and I know this would be more than a two-horse race. When we started to climb again after the bridge, I was feeling strong, and knowing that we had a twenty minute single track descent coming up where I would lose chunks of time to Mark and Sam, I decided to put in a big effort. I was able to put a few minutes on them before we hit the Colorado trail, but as predicted, by the time we finished the descent, Mark had reeled me in and Sam was right on my heels.

On the next short climb I was able to claw onto Marks wheel, but on the subsequent fast descent to the start of the Baldy climb, both he and Sam put some distance on me. The Baldy climb is a solid thirty minutes, followed by a twenty-five minute descent that’s the longest of the race. I knew if I didn’t make a move on Baldy, they would gap me by too much on the descent to overcome. So I put in a big dig, caught Sam and then Mark, and then climbed solo to the top. I must have put four to five minutes on the two of them because, on the long descent, neither of them caught me. I hoped that if I could reach the Nice Kitty climb and get out of sight before they could see me, they might just let me go, and it appears that’s what happened. 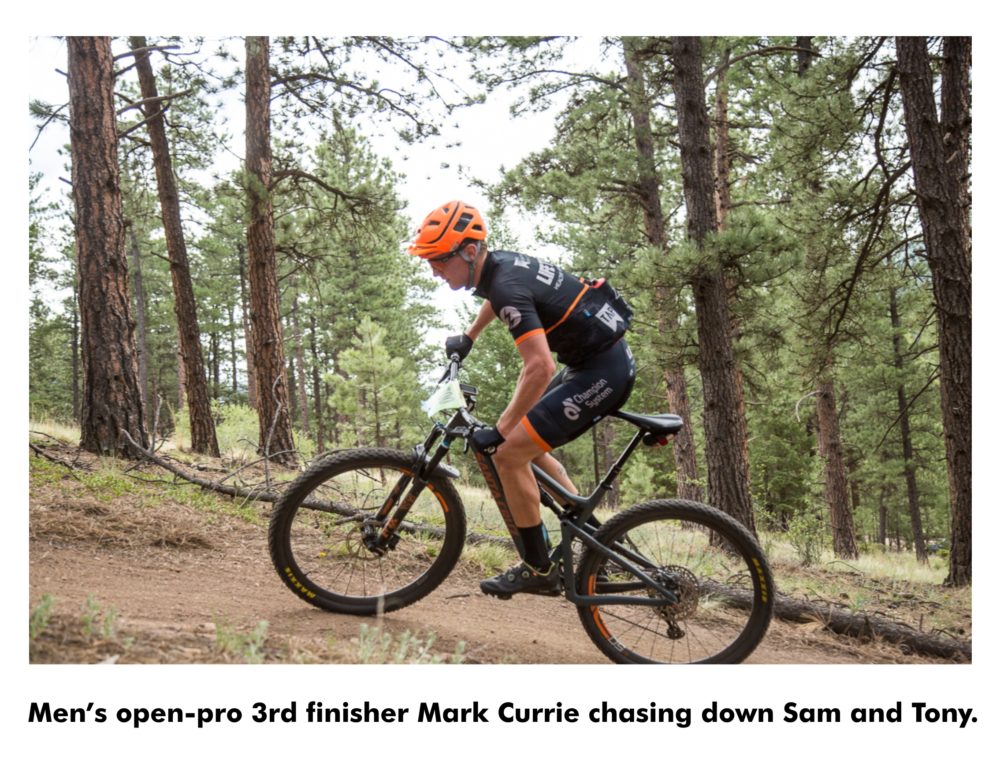 I climbed as hard as I could on that long Kitty climb, and then just focused on staying upright on the Shingle Mill and Morrison Creek descent. When I spilled out on the last dirt rode climb to the finish, I kept the pressure on the pedals and was fortunate to ride to the win against two insanely strong competitors.”

Four minutes later, Sam Furness, Nat Grocers/Honey Stinger finished second at 3:44:41. Furness made his 2017 NUE debut with this race, and joined his dad, Sam Furness, who also claimed a spot on the Masters podium.

Exactly one minute separated fourth and fifth place as Scott Leonard, Mountain Flyer Magazine, finished 3:55:30, just ahead of Gregory Stokes, STRAFE, at 3:56:30 both included in the elite six that finished sub four hours on the day.

Anderies with a commanding win!

Matt Anderies, Avout Racing, made his NUE 2017 debut with a commanding fifteen minute cushion for the win at 4:15:05.

“My race experience was pretty great and weather was amazing compared to high 90’s from last year. The race course is fast and fun, with the road climb(s) near the beginning really doing a great job of separating the group before the singletrack begins. The course is well marked and aid stations are great. I raced using 32×20 gearing. Anytime I race a course with more than a few thousand feet of climbing, I use this gearing. This course was faster than I was expecting and I probably could have gotten away with 32 x 19.”

Ross Serven, earned second place in his first Single Speed endurance race at 4:30:29. “The Bailey Hundito was my first SS endurance race, so I wasn’t completely sure what to expect, but it turned out to be a great time. The race was well organized, there was a solid field and, as everyone knows who has ridden Buffalo Creek, some really fun single track.

I typically ride 32×20 but, heading into the race, I decided to move to 32×18. After a confidence boosting pre-ride of some of the course the week before, I decided it was the right gearing for the race. Starting off the race I was mid-pack but, thankfully as the race rolled on, I continued to feel stronger. Starting the climb up Nice Kitty, I was feeling good and managed to gain some ground on the other riders and that momentum pulled me through to a strong finish, definitely not a bad way to spend a Saturday in June.”

Two minutes later, John Pavlik, Alchemist, who raced last year in the Men’s Open category at Bailey Hundo, moved to Single Speed in the Hundito this year to finish with a time of 4:32:29.

“Thanks for a great race. I think, overall, it was a fantastic experience. I have ridden in the Hundito for four years now and this was, by far, the best course. Aid stations were well provisioned and the volunteers were stoked to help. I rode in the Singlespeed category with a gear ratio of 1.5 which was pretty ideal for the course.”

“The Bailey Hundito was another great race put on for the benefit of the Bailey area trails and youth biking. There was no disappointment this year with a new single-track section, a full fifty mile course and over 5500 feet of climbing. It’s usually warm the day of this event and this year the water hand ups were amazingly well organized and appreciated. The volunteers were all well prepared and water bottles were received without even slowing down!  Thanks for a very well run race, an excellent after party, and a huge shout out to Hog Heaven BBQ for the great lunch!”

Wallace, the senior member of the team, keeps the young guns honest and  shows what a little extra hard work can accomplish winning the 50-59 age group and besting his teammates with the eleventh overall place. “My team, #Pedalpusherskindracing, was well represented at this years’ Bailey Hundito with three of us racing the 50 mile “short course”. We rode together for much of the race, pacing each other along finishing in 11th, 13th and 15th place overall.”

Seven minutes behind Wallace, Todd Maus finished in second place with a time of 4:21:08.

“This was the third year in a row that I did the Bailey Hundito and I was really looking forward to this race as my twenty-year-old son did the race with me this year. We were fortunate enough to both finish well enough to podium and this will be quite a memory for me and my son to have. I did not have the smoothest race as, unfortunately, I crashed hard two times during the first half but, somehow, was able to get it together to finish the race just barely ahead of my good friend Jon Cox with three miles to the end. All in all, a memorable day for my family, friends, and me.”

On July 8th, racers will travel to Sturgis for the Tatanka, a point to point race in the Black Hills of South Dakota that starts beneath iconic Mount Rushmore then along the Centennial Trail toward the finish in Sturgis. Stay tuned for the full report plus live social media updates during the race on Facebook at National Ultra Endurance Mountain Bike Race Series. 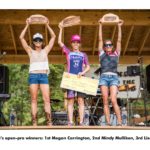 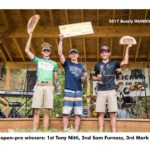 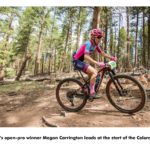 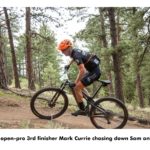 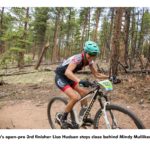 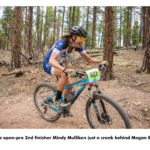 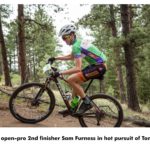 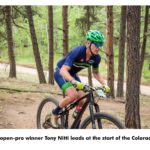