As any veteran of the 24 Hours of Moab will tell you, fall racing in Moab is as much about surviving the environment as it is about conquering the trails. Today’s stage 2 of Moab Rocks proved that to be true.

Moab has an endless number of challenging weather conditions it can throw at you. Today Moab chose: Wind. A gusting 20-25 mph wind strafed riders throughout the day, at times making it difficult to hold your line on the tight singletrack of Klondike Bluffs. Although it could have been worse as abundant slickrock kept blowing dust to a minimum and the winding trails meant the wind was never in your face for too long.

Although some ominous clouds blew through just before the start riders were treated to warm sun and near perfect temperatures throughout day 2.

Racing got off to a mellow start, as no one wanted to lead on 4-mile road start straight into the teeth of the wind. Once off the road, Travis Brown (Trek) led a group of 20 riders along a sandy doubletrack section until a wrong turn by the leader shuffled him to the back of the group.

The slickrock started almost immediately after and never stopped for the next 20 miles.

Brown, an experienced champion, didn’t let the early mishap unravel his day as he quickly worked his way back to the front before stage 1 winner Eric Tourville (Hype) could build on his 1 second GC advantage.

Tourville was having issues of his own, puncturing his arm on a surly juniper tree early in the race and then cutting his hand and tearing the nail off his pinky finger during an awkward crash.

The top-5 stayed close throughout the race with just 2 minutes separating first and fifth place on the day.

Travis Brown wouldn’t be denied his stage win, taking the endure prize for the day and crossing the line 40 seconds up.

Tourville held on for second.

The women’s event was a different story as Jen Hanks (Epic Brewing/MTBRaceNews.com) and Pepper Harlton (Devon) were determined to make up time lost on stage 1.

Harlton had flatted on Porcupine Rim and Hanks was frustrated after giving up the lead just before the finish on day 1.

The two stuck together from the very start with Hanks leading the way on the road and Harlton staying glued to the Utah rider’s wheel.

It stayed that way for much of the day until a fateful moment when race leader Jen Hanks got stopped on a technical section of downhill and the Canadian Harlton blew past her, getting off course almost immediately.

“I got stopped and had to get off my bike”, Hanks said after the race. “Pepper flew right past me but must have turned off the trail right away because by the time I got back on she was out of sight.”

This left Hanks solo out front. With just the Dino descent left. The final 4 miles literally flew past as the powerful winds pushed riders down the fast and flowing Dino trail.

Hanks crossed the line in first, putting over 3 minutes on overnight GC leader Jennifer Schulz (Balance Point). Hanks will be taking over the pink leader’s number plate for tomorrow’s finale at Mag 7.

A lot can still happen with less than a minute separating Travis Brown and Eric Tourville and big time swings happening each day for the open women.

Tune in to MTB Race News for full results, report, and photos from tomorrow’s stage 3. 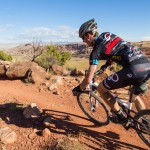 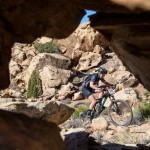 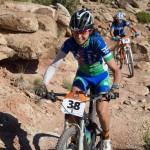 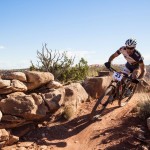