This is the biggest day of the week, as one guy said at the finish, “Every stage is so hard I just can’t compare them” and today is no exception.

With 42 miles, 6000’ of vertical and some gigantic climbs, this day is the longest on the bike.   Again this morning we started out in the middle of the town of Breckenridge with a pacer car to French Gulch Rd. It’s a dirt road climb for the first few miles which helps to spread racers out. Then it’s some fun single-track- Fall Classic trail, Slalom and Upper Flume trails before racers head up a new section of the course- Traylor Way to ZL Trail.

Traylor way was another dirt/rocky road climb but the new ZL trail was a great addition! It’s a beautiful singletrack with some fun downhill sections. Then it’s over to the Dredge lot for Aid 1 and up/down the Colorado trail to Vomit Hill. 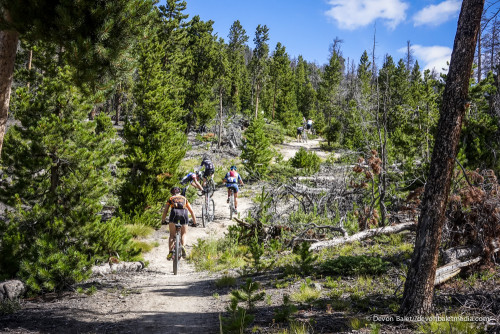 For the lower section, Vomit Hill was mostly a hike a bike, then it tricks you by leveling out in a beautiful meadow only to put you back in the pain cave with more climbing- steep long sections that hurt. Once up and over it’s a fun descent on Horseshoe Gulch trail to the Aqueduct trail.

The Aqueduct trail is a flowy trail that turns pretty flat before sending racers out on Keystone Gulch Rd. This is where the longest climbing of the day starts- 1800’ of vertical over 5 miles. It’s a long road climb, followed by a singletrack climb to West Ridge. Then it’s on to one of the best parts of today’s course: flying down West Ridge. This descent is incredibly fast and fun. Once down West Ridge, racers make their way to the final climb of the day- Rock Island Gulch. This is a long, difficult road climb back up to French Gulch. Then it’s down Lincoln Park road, Side Door trail, Minnie Mine trail and B&B trail to the finish.

Time gaps between the leaders would remain at about 1 min through Aid 2. Coming out of Aid 2 Claes showed why he has won every stage thus far at the Breck Epic.  Despite their best efforts working together Dillon and Swanepoel were unable to close the gap and Claes would go on to open his overall lead by another 4 minutes. Dillon would best Swanepoel at the line for second. 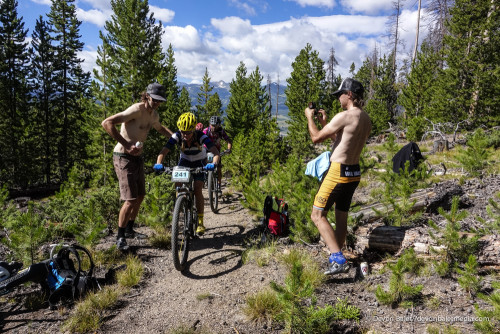 Kelly Boniface was back in the battle on stage 4 – Photo by Devon Balet/DevonBaletmedia.com

In today’s pro women race things changed around a little. Evelyn Dong (Shoair/Cannondale), Kelly Boniface (Moots), Serena Gordon (Liv/Giant), and Marlee Dixon (Pivot/Epic Brewing) all were relatively close for the first few miles then Evelyn started to pull away and Kelly was riding strong in 2nd.

Serena was in 3rd until the descent down Summit Gulch Rd. where Marlee passed her.

Marlee caught Kelly on the Aqueduct trail where they rode together for a little while until the Pivot/Epic Brewing rider pulled away.

By Aid 2, Evelyn was 2 minutes in the lead, and Marlee and Kelly were separated by less than a minute.

At Aid 3, Evelyn was still in the lead by a minute, Marlee was in 2nd, Kelly in 3rd and Serena in 4th.  Evelyn finished 1st ; 30 seconds ahead of Marlee who now holds 2nd place overall. Kelly Kim Boniface finished a few minutes back and leap frogs Serena Gordon into 3rd place. 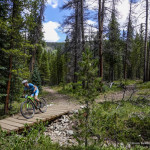 Great descending follows the many big climbs of the day – Photo by Devon Balet/DevonBaletmedia.com 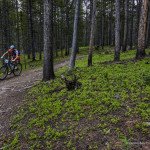 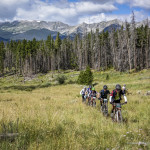 Amazing scenery is always on hand at the Breck Epic – Photo by Devon Balet/DevonBaletmedia.com 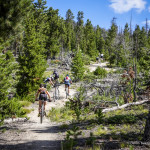 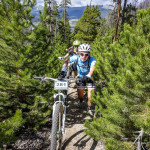 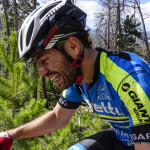 This is what the pain cave looks like – Photo by Devon Balet/DevonBaletmedia.com 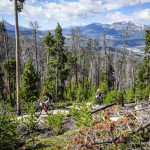 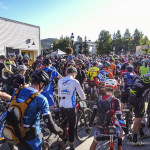 Riders prepare for the start – Photo by Devon Balet/DevonBaletmedia.com 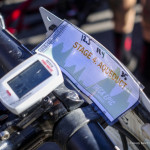 The daunting course profile of stage 4 – Photo by Devon Balet/DevonBaletmedia.com 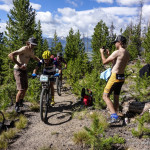 Kelly Boniface was back in the battle on stage 4 – Photo by Devon Balet/DevonBaletmedia.com